There haven't been many stocks over the past few years performing better than Netflix (NASDAQ:NFLX) and The Trade Desk (NASDAQ:TTD). Despite already being an outperformer over much of the past decade and lagging behind the market in 2019, Netflix's stock is still up 167% over the past three years. Not to be outdone, The Trade Desk has exploded since its September 2016 initial public offering, and is up a whopping 871% over the same three-year time frame.

Both Netflix and The Trade Desk have benefited from the rise of digital media, and specifically of internet streaming. However, the two companies have taken different paths to riches within that space. Netflix was a first mover and disruptor in delivering premium, ad-free content via the internet. The Trade Desk, with its leading ad-buying software, has traveled along the changing advertising landscape from manually bought space on linear media to automated, programmatic advertising on ad-supported streaming TV ("connected TV").

However, The Trade Desk's CEO, Jeff Green, just made a bold declaration: Even the mighty Netflix may have to change its business model. 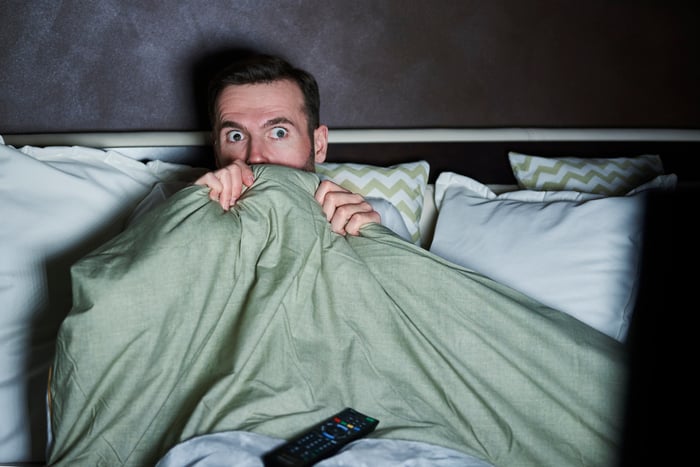 Will Netflix bust its business model?

On The Trade Desk's third-quarter conference call last month with analysts, Green highlighted that connected TV was by far the most exciting driver for his company today and will be so over the next few years. He called it "the most strategically important focus of our business going into 2020." The relatively new connected-TV segment grew a whopping 145% last quarter, far outpacing the Trade Desk's overall revenue growth of 38%. Green specifically noted the live events portion of that streaming expense, as even live shows are increasingly being delivered via streaming services. Furthermore, with the deluge of new streaming services coming to market at the end of this year and next, the current acceleration of cord-cutting, and the beginning of the 2020 election cycle, Green only expects better things for the connected-TV segment.

As more and more services compete for eyeballs, content costs are going through the roof, while the oversaturation of viewing is leading to a more fragmented audience for each show. That's not a great recipe for content creators, so more will be turning to programmatic, targeted advertising on these new platforms in order to maximize ad dollars per eyeball.

Green suspects these trends will spur even Netflix to reluctantly abandon its ad-free model:

As we have seen, platforms such as Netflix are fighting tooth-and-nail for subscriber growth, while having to issue new debt just to keep pace in the war for premium content. There is only so much subscription demand, and there are new competitors every month with massive established content libraries. It all points to growth in ad-funded models, and I firmly believe that even Netflix will start to experiment with ad-supported services in the future. I believe they'll eventually adopt what others have, giving consumers the choice to pay more and avoid all ads, or pay less and see a few highly relevant ads.

This sea change is already starting to kick in for The Trade Desk, which recently announced new partnerships with both Amazon (NASDAQ:AMZN) and Walt Disney. The partnership with Amazon is a "potential game-changer," as Amazon is opening up all of the third-party streaming services it offers on the Fire TV marketplace to the Trade Desk's ad-buying customers. The proof is already starting to show up in The Trade Desk's numbers. Last quarter, the number of Amazon impressions on TTD's system went up a stunning 21 times over the prior year.

While Green's prediction makes sense on the surface, it would be a pretty big deal for Netflix to start showing ads, or even to begin offering a lower-priced, ad-supported tier. As recently as July, management firmly reiterated in its second-quarter letter to shareholders that it would never show ads:

We, like HBO, are advertising free. That remains a deep part of our brand proposition; when you read speculation that we are moving into selling advertising, be confident that this is false. We believe we will have a more valuable business in the long term by staying out of competing for ad revenue and instead entirely focusing on competing for viewer satisfaction.

Thus, it would be a long shot to bet on Netflix changing its ways anytime soon. However, should its subscriber numbers begin to slip amid the deluge of competition, we'll see how the company adjusts. If you'll notice, Netflix referred to HBO in the statement above, but even the upcoming HBO Max will apparently have an ad-supported tier. Comcast's new service Peacock may also offer a completely ad-supported tier for free. And it's pretty hard to compete with "free."

2020 will certainly be an interesting year in the streaming wars. Investors will have to assess the effectiveness of these new ad-supported services, alongside incumbents such as Netflix, as their numbers come into view.