Investors don't need to look much further than the stock's 80%-plus rise this year to know that lululemon athletica (NASDAQ:LULU) is in Wall Street's good graces today. The athleisure retail specialist has been routinely trouncing earnings and sales expectations thanks to a quickly growing industry and bolstered by smart initiatives around e-commerce and new product launches both inside and outside of the chain's core female yoga fan demographic.

All of that optimism sets a high bar for the company when it announces its third-quarter earnings results on Tuesday. With that backdrop in mind, let's look at the key trends to watch for in the report. 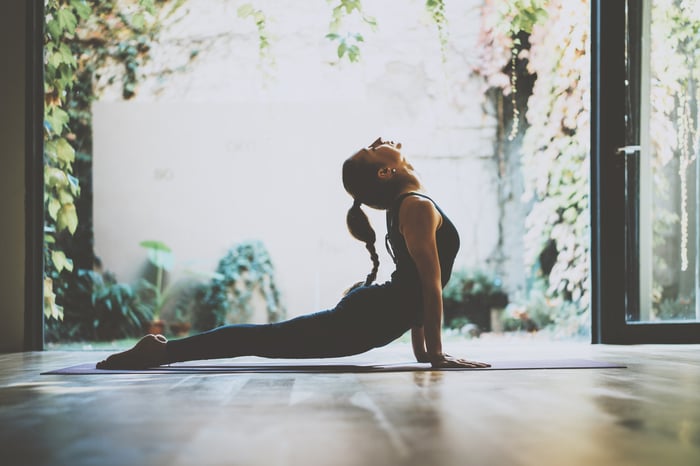 You'd have to go back to early 2018 to find the last time that Lululemon failed to surpass management's quarterly growth outlook. The past few periods have been especially strong, with sales in Q2 jumping 22% compared to the 15% increase that CEO Calvin McDonald and his team had targeted. That growth easily translated into market share gains for the relatively small company, which is impressive given that better-capitalized rivals like Nike have been targeting its space in recent months.

For Tuesday's report, Lululemon predicted that quarterly sales would land at $885 million, and anything above that would mark its seventh consecutive quarter of beating guidance. Wall Street is banking on that happening, with most analysts who follow the stock forecasting sales of just under $900 million.

Just as impressive as its raw growth rate is the fact that Lululemon's gains are coming from such attractive areas. Like Nike, the chain's sales are soaring. But it has a wider growth opportunity given its current concentration in the U.S. and Canada. Lululemon is also seeing lots of strength in its latest menswear launches, in niches like outerwear, and in the digital sales channel. All of these successes are supporting higher profit margins while adding fuel to management's aggressive global expansion efforts.

Investor focus for the quarter immediately preceding the holiday period usually lands on a retailer's short-term outlook. That's because the update provides clues on a quarter that can make or break annual results, but Lululemon's upcoming forecast is even more important since it is coming several days after the official beginning of the holiday shopping season.

As it stands now, investors are expecting the company to issue guidance targeting roughly $1.3 billion in sales in Q4, equating to a 13% increase year over year. Hitting that goal would leave Lululemon at $3.9 billion for the full year, with sales 18% higher than in 2018.

Those expectations are higher than the official outlook that management issued in early September. Thus, if the company doesn't raise its 2019 forecast for the third consecutive time this year, then the stock could retrace some of its market-thumping growth in recent months.

Selling your shares in that situation would likely be an overreaction, though, since Lululemon is looking at a long runway for growth over the next decade as it pushes into new product niches while extracting more efficiency from its powerful sales model.