lululemon athletica (NASDAQ:LULU) turned in another stellar round of earnings results last quarter. One of the highlights was international growth, up 39% year over year. Regular followers of Lululemon know that numbers like this are business as usual for the brand.

The momentum isn't going to slow down anytime soon, based on management's target to quadruple international sales in five years. Lululemon's brand is resonating not only on its home turf but also in Europe and Asia. But exactly how big is the international opportunity? 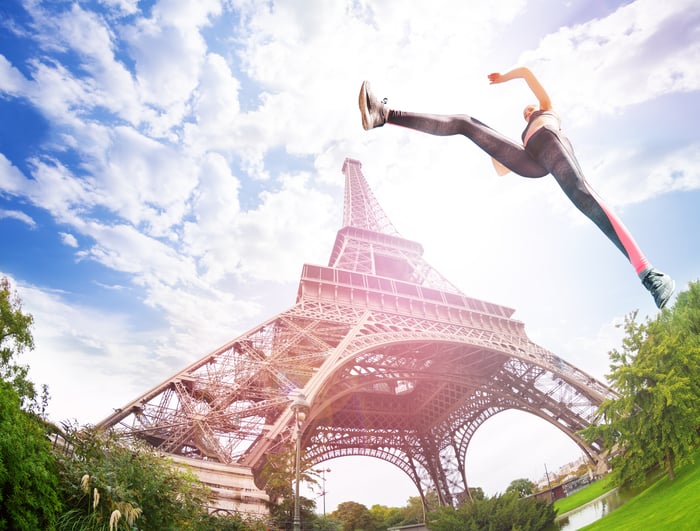 The need for athletic wear is universal

We know how big the athletic apparel market is globally -- about $300 billion, according to Morgan Stanley. But with so many competitors vying for position, it doesn't tell us, specifically, what the opportunity is for Lululemon. We can get an idea by looking at Lululemon's recent international growth and comparing its geographic makeup to its larger peers.

Lululemon's international sales made up only 11% of total revenue last year, with the balance coming from the U.S. and Canada. But recent trends suggest the international segment is on track to one day make up a much larger portion of the company's revenue.

Over the last several quarters, international growth has hovered around 40% to 50% each quarter. It's been especially strong in China, where market growth skyrocketed 70% in the first quarter.

International is a multibillion-dollar opportunity

Lululemon has a massive opportunity in Asia, not to mention Europe, where the brand is starting to take off. Demand for athletic wear in Asia has just started to pick up in the last 10 years, mainly because Asians haven't always been into the athleisure craze like people in the U.S. and Europe. Because of this, the athletic apparel market in China is still in its infancy.

Nike and Adidas have been experiencing double-digit growth in China for a while, which reflects two things: 1) The growing demand for athletic wear in that country, and 2) A growing Chinese middle class, which is already the size of the total U.S. population and is expected to double to 600 million in 10 years.

Because of global demand for athletic wear, Lululemon will likely see most of its revenue come from outside of North America in the next few decades, consistent with its peers. This means Lululemon's international revenue, which last year totaled $360 million, could eventually surpass the company's current annual revenue of $3.75 billion, based on this year's guidance. Of course, management has already guided that international revenue will increase fourfold to $1.44 billion in five years, but hitting that target is just the tip of the iceberg.

It's clear that the skyrocketing growth in Asia and Europe, coupled with the disproportionately small revenue contribution coming from outside North America, is pointing to a multibillion-dollar opportunity unfolding for Lululemon.

What all this means is that buying Lululemon stock today could be like buying Nike stock 20 or 30 years ago. Even as Lululemon's international opportunity is in the early stages of development, North America sales continue to grow steadily, up 18% last quarter. With the company's goal to bring the men's business more in balance with the women's category (which makes up most of its sales), North America should be posting double-digit growth for a while before it dramatically slows down.

It's for these reasons that Lululemon continues to be one of my favorite retail stocks to buy.