Home Depot (NYSE:HD) has been one of the best-performing retailers in the market over the last decade.

The company's strong position in home-improvement products, an area that's been mostly protected from the disruption of e-commerce, and a housing boom have helped drive the stock up more than 600% over the last 10 years. That impressive performance has come almost entirely because of profit growth as the stock's price-to-earnings multiple has held steady. Today, it trades at a P/E of 21.2.

Will Home Depot's winning streak continue over the next five years? That depends on a few factors. Let's take a look at what we know and don't know about the company's direction to explore where the retailer will be in 2024. 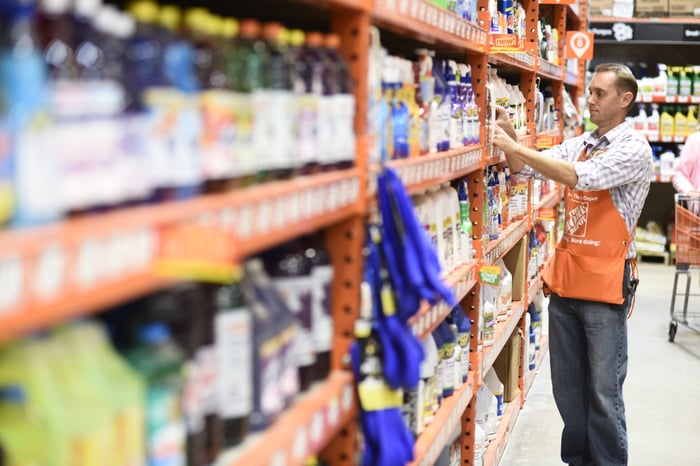 Unlike many retailers, Home Depot has long iterated a clear strategy to investors, outlining future financial goals and initiatives to achieve them. Its core strategy is "One Home Depot," which aims to grow market share by improving customer service and customer experience online and in stores. Home Depot has resisted opening stores for the last decade so that it can instead spend money on store improvements, e-commerce, technology, and share repurchases, and the company has committed $11 billion to investments under the One Home Depot plan.

Based on its interest expense of about $1 billion and its tax rate of 23.6% last year, the company would have a net income of $15.5 billion by fiscal 2024. It's also on track to reduce its share count by about 200 million shares, bringing it to about 890 million, which would give it earnings per share of $17.41 by fiscal 2024, nearly double last year's total.

Of course, Home Depot's actual earnings per share will depend on the strength of the housing market, the competitive landscape, and the company's own ability to execute, which will be most visible in its operating margin.

Much like the stock market, the housing market is notoriously difficult to predict, but it's clear that Home Depot has benefited from robust growth in the housing sector over the last decade as home sales and prices rose following the financial crisis. Rival Lowe's has also been a strong performer over the last decade, though Home Depot has been the better stock. According to the S&P/Case-Shiller Index, home prices in the U.S. have risen 42% over the last 10 years and are up 58% from a bottom in 2012.

Meanwhile, there are some signs that the housing market has been softening in recent months. The number of Americans saying they are looking to buy a house in the next year fell to 12% in the second quarter, down from 14% last year; new homes for sale are essentially flat, and price increases are moderating. In other words, Home Depot is unlikely to get the same tailwind over the next five years that it had from the housing recovery over the last decade.

Home Depot investors shouldn't expect a repeat of last decade's blowout growth as conditions in the housing market have changed. Nonetheless, the company is the leader in home improvement retail and has considerable competitive advantages as well as a highly efficient and profitable business. If its earnings per share reach $17.41 in fiscal 2024 and its current price-to-earnings ratio holds, the stock price would be $370.48, or 73% higher than it is today. Home Depot has also been raising its dividend aggressively in recent years, so investors can expect annual increases in its quarterly payout as well.

Given a moderating housing market, the risk of recession, and recent signs of a slowdown as profits fell slightly in its most recent quarter and net sales grew just 3.5%, Home Depot's growth is likely to be more restrained over the next five years. Still, the company seems like a good bet to beat the S&P 500 due to its strong competitive position in home improvement retail, its highly profitable business, and a generous capital return program.