Give yourself a gift that keeps on giving. No, I'm not talking about a subscription to the "Jelly of the Month" club like Clark Griswold received in the movie Christmas Vacation. Buy growth stocks that could deliver great returns over the long run.

If you're wondering which stocks would be great to put in your stocking, I think three especially stand out: Elastic (NYSE:ESTC), MongoDB (NASDAQ:MDB), and Square (NYSE:SQ). Here's why these three top stocks look like smart picks to buy in December. 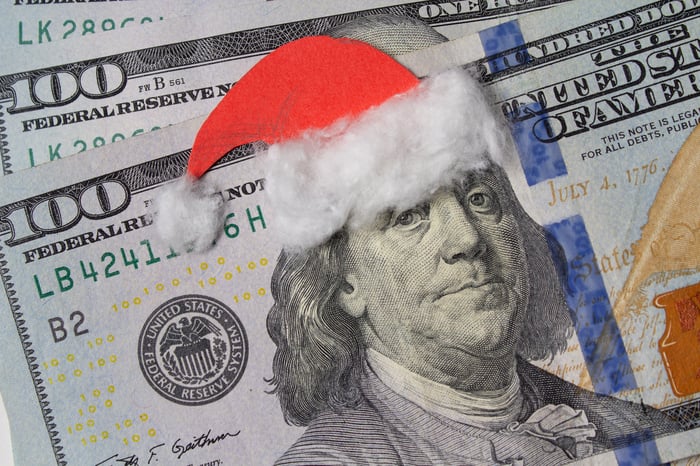 You probably use a search engine nearly every day. Corporations and government agencies need to search data, too. Elastic's software platform enables them to search their data as well as analyze, manage, and visualize it. Market researcher IDC thinks the expansion of stored data will be "never-ending," with the total data stored globally skyrocketing more than fivefold over the next six years.

Business is booming for Elastic. The company reported sales of $101.1 million in its latest quarter, up 59% year over year and 63% on a constant-currency basis. It counted over 9,700 customers at the end of its fiscal 2020 second quarter, over 10% growth from the previous sequential quarter. Elastic's net expansion rate, which measures increased spending by existing clients, topped 130% for the 13th consecutive quarter.

It's not hard to figure out why Elastic is growing. The company's Elastic Stack platform gives customers exactly what they need to search data at a lightning speed. Elastic Stack operates on a distributed model, which means all customers have to do to increase capacity and speed is to throw more servers into the mix. Elastic also continues to roll out new capabilities to help customers manage their data more effectively.

The total addressable market for Elastic is around $45 billion annually. Elastic's sales this year won't even total 1% of that market. I think this stock has a massive growth runway ahead of it.

MongoDB is similar to Elastic in some ways. Both are fast-growing technology companies with software that can run in a cloud environment or in an on-premises environment. Both use a "freemium" model with open-source software that can be downloaded for free, with customers paying for added features and support.

But while Elastic enables customers to search and analyze data, MongoDB enables them to store their data. Of course, databases have been on the market for decades. Unlike legacy databases like those from Oracle and Microsoft, though, MongoDB designed its database from the ground up to support unstructured data (images, texts, etc.) -- the kind of data that's largely driving the growth that IDC projects.

Mongo delivered 67% year-over-year revenue growth in its fiscal 2019 second quarter. The company's Atlas cloud-based database software fueled much of that growth and continues to gain momentum. Its net expansion rate remains over 120%, which is a very healthy level. I look for Mongo to report more strong results when it provides its Q3 update on Dec. 9.

Currently, the global database market stands at close to $64 billion annually. It's expected to jump to $98 billion over the next four years. Like Elastic, MongoDB captures less than 1% of its addressable market right now but is gaining an increasing share every quarter.

If you've made a purchase from a small business, there's a very good chance you've encountered Square in action. The company is a leader in providing payment solutions for merchants, primarily small-to-medium sized businesses.

We can't peg Square as only a financial technology company for these businesses, though. The company's Cash App peer-to-peer payments app generates more than one-fourth of its total revenue. Cash App is also giving PayPal's Venmo a run for its money.

Thanks in part to Cash App's growth, Square's revenue continues to soar. The company reported total net revenue of $1.27 billion in Q3, up nearly 44% year over year. Its bottom-line growth was even more impressive, with earnings jumping almost 50% higher than the prior-year period total.

Square's total addressable market is $3 trillion in gross payment volume -- but that only represents the U.S. payment processing market. The company is expanding its ecosystem in several ways. It's also working to entice customers to use more of its products beyond payment processing. I view Square as one of the most attractive stocks to profit from the ongoing "war on cash."