Please ensure Javascript is enabled for purposes of website accessibility
Log In Help Join The Motley Fool
Free Article Join Over 1 Million Premium Members And Get More In-Depth Stock Guidance and Research
By Daniel B. Kline - Dec 8, 2019 at 10:30AM

The fintech company will benefit from consumers becoming more comfortable with its technology.

PayPal (PYPL 5.96%) has always been on the leading edge of technology. It pioneered digital financial transactions and has continued to be a leader when it comes to peer-to-peer transactions through its Venmo platform.

The fintech company has had to educate its customers as it built an audience. That's a challenging position to be in, but the public has grown more comfortable with digital payments, which has been good for PayPal (and the increased number of transaction fees it collects).

"Excluding unrealized losses associated ... with our investments in MercadoLibre and Uber, we delivered a very strong $0.79 of non-GAAP EPS as compared to our guidance on a similar basis of $0.69 to $0.71," said CEO Dan Schulman during the company's Q3 earnings call. "Excluding the mark-to-market changes in our strategic investment portfolio, our non-GAAP EPS grew 31% driven by a year-over-year expansion of more than 200 basis points in our non-GAAP operating margin to 23.4%." 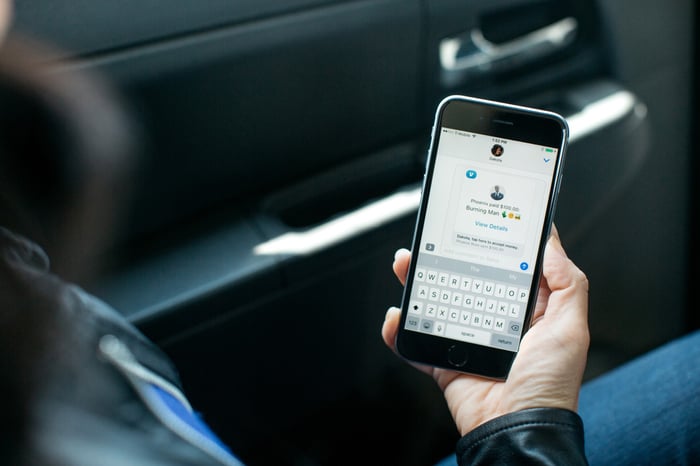 Venmo has been a strong driver for PayPal. Image source: PayPal.

PayPal has only scratched the surface of its potential market. It remains a high-growth company that has seen its customer acquisition rate accelerate.

"We added 9.8 million net new actives in the quarter, a record number for any previous Q3," said Schulman. "We now have 295 million active accounts on our platform, up 16% year over year, including over 23 million merchants. We anticipate ending the year at approximately 304 million active accounts above our stated target of 300 million."

In addition to adding customers, PayPal has also been getting its existing users to use the platform more. That's a key metric that shows how people are not just using the company's products when they have to, but that they are growing comfortable using them.

"Engagement continues to consistently increase, growing by 9% to almost 40 transactions per active account," according to the CEO. He said:

Mobile is a major driver of our growth, with One Touch at 172 million consumers and 13.8 million merchants. We are quite focused on growing our value proposition beyond checkout as our consumers look for more reasons to use PayPal as part of their everyday financial life.

Where is PayPal in one year?

PayPal has become a self-fulfilling prophecy. As more people adopt the company's various platforms, that leads to others having to get on board. That's very evident in the growth of Venmo.

"Venmo continues to be an incredibly powerful platform for engaging consumers," Schulman said. "We processed more than $27 billion in volume for the quarter, growing 64%. That's almost $300 million in payments per day and an annual run rate that now exceeds $100 billion."

As PayPal grows, it becomes more of a default method for payment. That forces merchants to adopt the company's technology while driving consumers to join its various platforms.

PayPal is essentially a ball rolling downhill. As it goes, it will get bigger and move faster. There may be bumps, but a year from now, the company should be bigger, with more customers and dramatically more transactions being processed. That's great news for investors because every new customer who uses Venmo or PayPal increases the depth of the company's moat and reduces the chances of a competitor gaining a foothold.