Thor Industries (NYSE:THO) released fiscal first-quarter 2020 earnings on Monday before the markets opened for trading, and it received an expected boost from European sales due to its February 2019 acquisition of Erwin Hymer Group (EHG). The recreational vehicle (RV) manufacturer's North American sales continued to decline, however, although management did indicate that ongoing dealer inventory rationalization was nearly complete. Let's dive into the quarter's pertinent details below, bearing in mind that all comparative numbers refer to the prior-year quarter. 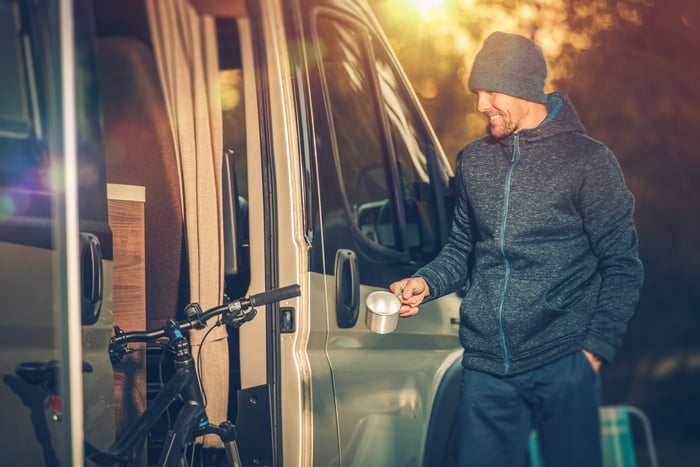 In Thor's earnings press release, CEO Bob Martin commented on both the company's higher gross profitability and the performance of the European segment:

In our fiscal first quarter, we achieved a pronounced improvement in our operating results, reflecting the benefits of the flexible and highly variable cost model we have developed, as we increased gross profit margins in our North American RV segments despite modest decreases in net sales. EHG's results for the quarter were generally in line with expectations as EHG has historically generated flat-to-negative first quarter results due to the European holiday shutdowns that occur in August, and due to the higher concentration of marketing and advertising expenses in the fiscal first quarter to support the annual RV shows in Europe.

Thor doesn't provide investors with quarterly or yearly earnings guidance. However, in the company's earnings press release, CEO Martin communicated Thor's belief that dealers' right-sizing of inventory on their lots over the last few quarters would finally be completed by the end of the current calendar year. Thor sees a flat or slightly declining North American RV market in 2020, with the potential for a strengthening of retail demand, as well as modest retail growth in the European market.

The company also reiterated aggressive longer-term goals first shared during its recent investor day in Germany. These include annual sales of $14 billion, a "sustainable" gross margin of 16% (Thor's annual gross margin has historically ranged between 12% and 14%), and the generation of cumulative net cash from operations of $3 billion between now and the completion of fiscal 2025. Nonetheless, shareholders of the consumer discretionary investment appeared to focus more on the soft North American market and the rather tepid results of the current quarter: Shares were trading down roughly 4% at midday on Monday.