Video game retailer GameStop (NYSE:GME) released its third-quarter 2019 earnings report after the bell on Tuesday, and the market reaction was swift and brutal. As of this writing, shares are down 15% in after-hours trading, and it's not hard to figure out why.

In the quarter, sales plunged 25.7%, and net losses were $40.2 million, excluding a $43 million noncash impairment charge. This was much worse than the 13.4% consensus revenue decline anticipated by analysts. The company also lowered its full-year EPS guidance to just $0.10 to $0.20, down from the previous range of $1.15 to $1.30.

New hardware sales plunged 43.4% and new software sales fell 32.6%, as customers are likely waiting for next year's new consoles from Sony's PlayStation and Microsoft's Xbox. The company did report growth in Nintendo Switch products, but it wasn't enough to offset the declines from the two other main game vendors. In addition, GameStop is under pressure from more video gaming going to digital streaming formats.

You might think these results would be reason to run for the hills, but GameStop's management also made a move that could actually make shareholders very rich one day -- that is, if the strategy works out. 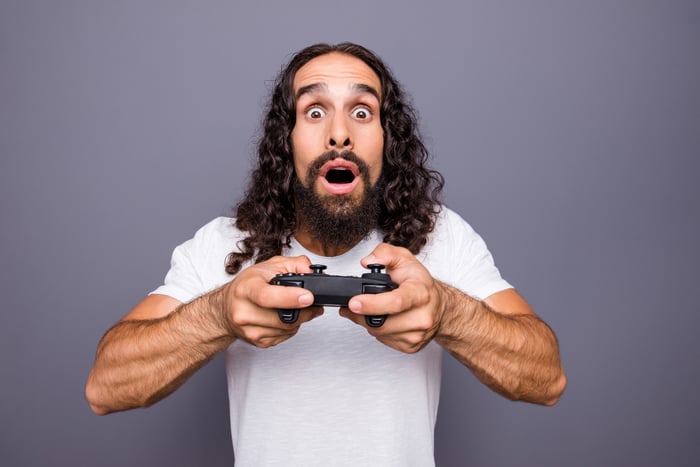 Buying back one-third of the company

Even with these dismal results, GameStop's stock price had already reflected a lot of bad news, trading below its liquidation value for much of the quarter. Seizing the opportunity, management bought back a whopping 22.6 million shares for $115.7 million in the quarter, at $5.11 per share. This followed a summer tender offer and more share buybacks earlier in the year, bringing the 2019 buyback total to 34.6 million shares for $178.6 million, at an average price of $5.14 per share. By quarter's end, there were only 67.8 million shares outstanding, down a huge 34% on the year.

This is actually a great sign because it shows two things. First, management understands capital allocation, and realizes that buying shares below book value is probably more value-accretive than trying to "diversify" by buying other companies outside of its core games business. GameStop had actually already tried that, buying AT&T reseller Spring Mobile in 2016, only to change course and sell the Spring Mobile business in 2018.

Second, retiring 34% of one's stock in a single year is fairly remarkable and a huge vote of confidence, especially since the company isn't exactly stretching its balance sheet. Even at the end of this horrible-looking quarter, GameStop has $290 million in cash and cash equivalents and only $419.4 million in debt. And of course, this is just before the holiday season, the highest sales quarter of the year, which should replenish the company's cash coffers by early 2020.

But buybacks only work if...

Repurchasing stock only works if shares are ultimately undervalued. Given the extreme low valuation at which GameStop was trading earlier in the quarter, that's likely the case. But it's by no means a certainty.

If the new PlayStation and Xbox do well enough to rejuvenate physical hardware and software sales for another multiyear console generation or longer, the recent repurchases could be incredibly value-enhancing to shareholders. But if digital streaming takes off in a bigger way and sales of physical games decline faster than anticipated, GameStop could continue to endure operating losses and may be headed for an even bigger fall.

Management believes that the former will happen, but not until the fourth quarter of 2020, when the new consoles hit the market. Until then, GameStop and its shareholders will have to hold on and hope. It remains a speculative deep value stock for risk-tolerant investors.