The market for wearable technology is seeing growth accelerate, thanks in large part to Apple expanding its portfolio with a slew of new products. Market researcher IDC has released its estimates for the wearables market in the third quarter, and they show that global unit volumes soared 95% to 84.5 million units. That's a massive spike compared to the 85% growth that the market registered in the second quarter.

Here's the latest data on the booming wearables market. 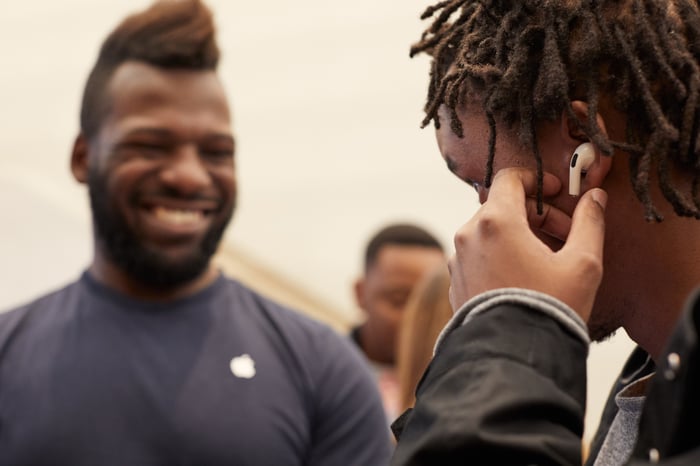 Hearable -- ear-worn wearable devices -- continue to represent roughly half of the market, with wrist-worn devices like smartwatches being the next-biggest category. Apple had launched its Powerbeats Pro over the summer, while more recent product introductions like AirPods Pro and Beats Solo Pro headphones were released after the end of the third quarter.

"Hearables have become the new go-to product for the wearables market," IDC's Ramon Llamas said in a statement. "This began with multiple vendors removing the headphone jack from their smartphones, driving the move toward wireless headphones."

Apple controversially killed the headphone jack in 2016 with the iPhone 7, catalyzing the shift toward wireless headphones. Since then, other smartphone manufacturers have followed suit, and hearables pricing has come down and spurred demand. At the same time, the Apple Watch Series 3, first released in 2017, recently got a price cut following the launch of Series 5, which is helping Apple keep its lead.

Xiaomi's volumes primarily consist of its Mi Band line of basic fitness trackers, while Samsung's sales of its Galaxy Buds remain strong. Huawei has been able to overcome geopolitical headwinds by focusing its efforts on its home market of China.

Fitbit, which is in the process of being acquired by Alphabet subsidiary Google, already reported last month that its unit volumes were essentially flat while its net losses widened substantially. The pending purchase "fills the brand's future with uncertainty," according to IDC. The company's Versa 2 smartwatch was launched at the tail end of the quarter, and it's unclear to investors how that gadget is performing since Fitbit canceled its earnings conference call due to the acquisition.

Ear-worn wearables are enjoying the strongest growth by far, with that category posting incredible growth of 242% in the third quarter, according to IDC. That's not to say that the rest of the market is slacking: Smartwatches and wristbands grew 48% and 49%, respectively. With other tech juggernauts including Microsoft, Google, and Amazon jumping in with new truly wireless earphones, the hearables market is poised to keep soaring.