The wearables market continues to boom this year, driven in large part by soaring sales of ear-worn wearable devices that have earned the unfortunate nickname of "hearables." Apple (NASDAQ:AAPL) has long dominated that subcategory with its wildly popular AirPods, which it refreshed earlier this year, giving them better battery life and other performance improvements.

"We continue to see phenomenal demand for AirPods, and when you tally up the last four quarters, our Wearables business is now bigger than 60% of the companies in the Fortune 500," CEO Tim Cook said on the last earnings call, referring to the wearables segment reaching the size of a Fortune 200 company. Apple doesn't disclose unit volumes, but market researcher IDC has just released third-party estimates on the wearables market. 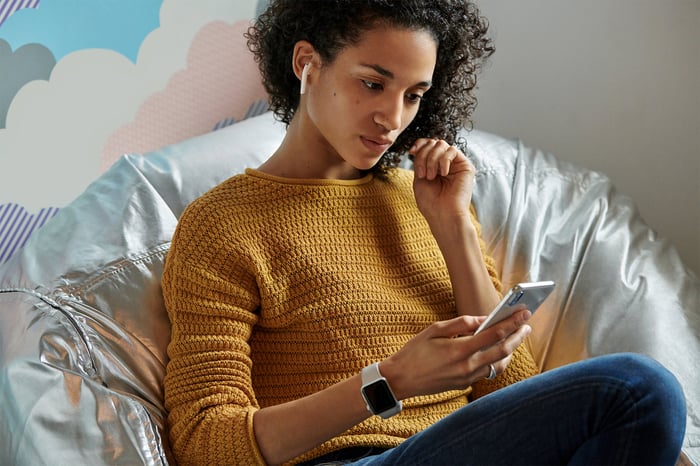 Hearables are now almost half of the wearables market

Total wearables units surged 85% to 67.7 million in the second quarter, with hearables being the among the fastest-growing subcategories. Hearables represented 47% of the entire wearables market, compared to 25% a year ago. New product introductions -- Samsung launched its Galaxy Buds near the end of the first quarter -- drove much of that growth, as well as consumers buying a hearable to complement a wearable device like a smartwatch.

"The growing popularity of the hearables segment is forcing existing brands to reconsider past designs when launching new products, as evident in Samsung's popular Galaxy Buds, while also attracting new brands to market," IDC's Jitesh Ubrani said in a statement. "And though it's still early days, the market is showing signs of emerging subsegments such as hearables dedicated to sports from the likes of Jabra, premium hearables from companies such as Bose, and ones dedicated to hearing loss such as those from Nuheara."

Total hearables units skyrocketed by 250% to 31.8 million during the quarter, underscoring the subcategory's blistering growth. The soaring popularity of hearables is sure to attract more competitors going forward.

Apple grabbed over 50% of the hearables market in the second quarter, with 15.9 million units shipped. Samsung was the No. 2. hearables vendor with 3.3 million units, good for 10% market share. The South Korean tech conglomerate also sells devices under the JBL brand, which it acquired when it purchased Harman a couple years back. Xiaomi came in No. 3 thanks to its AirDots.

"What has been driving the hearables market is the experience," IDC Research Director Ramon T. Llamas added. "Quality audio is still the hallmark of hearables, but additional features -- ranging from adjusting audio to smart assistants and health and fitness -- increase their value and utility." Llamas believes that the next generation of hearable devices will ultimately become "the new normal for earphones."