Stitch Fix (NASDAQ:SFIX) reported a mixed fiscal first quarter on Dec. 9 that included stellar top-line growth coupled with a much weaker bottom line due to higher expenses. Nonetheless, the stock was up in after-hours trading as the company beat analyst estimates.

The online clothing service has been knocking it out of the park as it grows total sales, but I still worry about how sustainable the business is as well as the company's valuation. 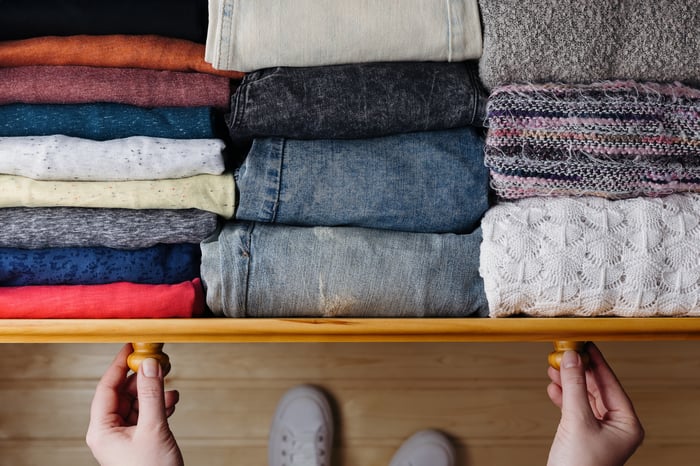 Sales and client growth continue to be the strength of the business, while expenses ate into operating income.

The weak earnings were related again to a big rise in selling, general, and administrative (SG&A) expenses, which were up 30.4%. Stitch Fix succeeded in slightly driving up gross profit, but costs stemming from its growth far outpaced the top line.

Despite that setback, investors are more interested in the growth story than the profit story at the moment. I've said before that Stitch Fix is an excellent example of top-line growth versus actual value for shareholders. That still holds true. The company is growing at a rapid pace in the rising wake of e-commerce and online services. That said, the stock has a lot of future earnings potential already baked into it.

Estimates are calling for full-year fiscal 2020 earnings of $0.04 per share. At those levels, there's little in the bottom line to support the company's stock price. Stitch Fix has to deliver down the road, meaning there's a lot of potential downside. But as long as the current spending creates a broader network of clients, the ends should justify the means.

Aside from the valuation, I also worry about the company's business model. The clothing service certainly is garnering a following for those who want help with their wardrobe, but it doesn't really have many barriers to entry.

Amazon.com (NASDAQ:AMZN), for example, has started its own clothing service that Prime members can access to employ a team of shoppers to make selections for them based on historical purchasing/style habits. If there's one company that you don't want crowding your market share, it's Amazon. This is the part of the Stitch Fix story that investors need to pay attention to most. Amazon has scale that Stitch Fix is still working to achieve, and it could cause big headaches down the road.

The company has dealt with some growing pains before, and while sales are strong, it's still not clear what the long-term effects of mounting competition will be. With that in mind, the stock is pricey relative to the actual earnings Stitch Fix is generating, which makes an investment questionable at present.