Stitch Fix (NASDAQ:SFIX) stock is on a tear -- in a good way.

After reporting a sizable earnings beat following the close of trading Monday night, Stitch Fix opened higher this morning, and was up a good 10% as of 11:11 a.m. EST. Earnings for the first fiscal quarter 2020 exceeded expectations simply by breaking even. Wall Street had expected a $0.06 per share loss, when calculated according to generally accepted accounting principles (GAAP).

Sales came in ahead of consensus as well, at $444.8 million. 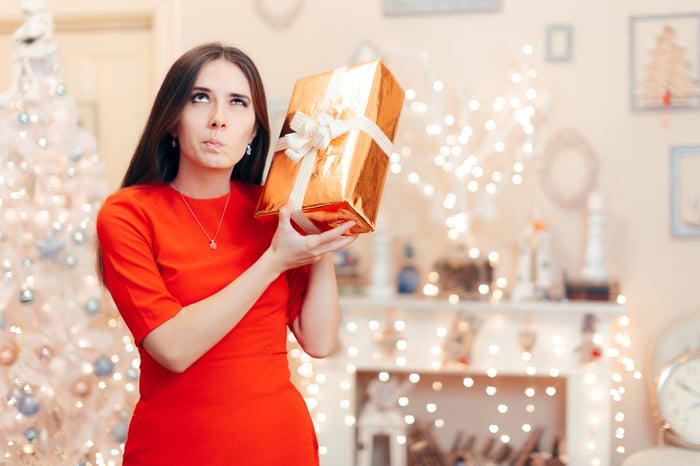 Take earnings, for example. Granted, management exceeded expectations in Q1. But its breakeven earnings of $0.00 per share, diluted, were still down significantly from the $0.10 per share profit Stitch Fix recorded in the year-ago quarter. Usually, growth investors prefer it when both sales and earnings rise in tandem.

Guidance was another issue.

CEO Katrina Lake says she's excited by the success of the company's direct-buy initiatives, and that she believes they "have the potential to expand our addressable market over time." But management's full-year 2020 sales guidance for revenue between $1.90 billion and $1.93 billion appears to fall just short of the $1.92 billion that Wall Street is expecting.

Nearer term, the news is even worse, with Stitch Fix projecting fiscal Q2 2020 sales of only $447 million to $455 million -- short of the $456.5 million that Wall Street wants to see. On top of all that, the company said that its chief financial officer, Paul Yee, "has decided to leave the company to pursue other career opportunities."

In bidding up Stitch Fix shares this morning, investors appear to be ignoring quite a few yellow flags surrounding future results. A more cautious stance on this stock would appear to be warranted.