In the latter part of 2018, NVIDIA's (NASDAQ:NVDA) stock went into a multiweek free fall that cut the stock by more than half.

The stock of the company, which makes graphics processing units (GPUs), had soared nearly 800% from the first day of trading in 2016 to its intraday high on Oct. 2, 2018. It fell over the next three months before starting to climb, and is up roughly 60% so far in 2019. NVIDIA's GPUs have been used for years to produce brilliant video game graphics, and the prospects of their use for artificial intelligence applications -- from deep learning to self-driving cars -- fueled investor enthusiasm. The powerful graphic cards were also being used for mining cryptocurrency, and when the cryptocurrency bubble burst, so did NVIDIA's share price. Mix in the effects of a trade war with China, and NVIDIA fell from around $285 per share to around $125 between early October and late December of 2018. Rattled investors -- those who stuck around, anyway -- were left wondering what to expect.

The company had been left with too many graphics cards and too little demand. NVIDIA leadership repeated a consistent theme: The company would work through excess inventory, and then growth would continue. It's been a year since the stock bottomed and it looks like management was right. 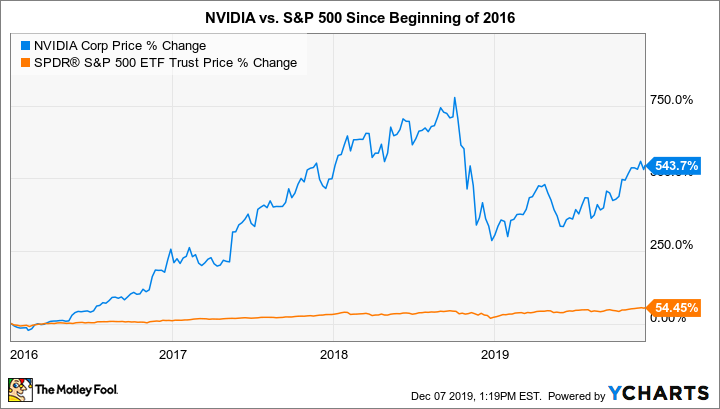 The company's third-quarter earnings report, for the three months ending Oct. 27, 2019, included the latest signs of improvement. While revenue was down 5% year over year and non-GAAP (adjusted) earnings per share were down 3%, the quarter-over-quarter results told a different story. Total revenue increased more than 16% sequentially for the second consecutive quarter. And adjusted earnings per share were up 44% over the previous quarter. The company showed strong growth in the two segments that account for nearly 80% of NVIDIA's revenue -- gaming and data centers.

While most of the hype surrounding NVIDIA in recent years has been focused on artificial intelligence initiatives, the gaming segment remains critical. Gaming has produced more than half the company's revenue for years, and provides cash that helps NVIDIA fund other initiatives.

In its third quarter, NVIDIA's gaming segment produced $1.66 billion of revenue. While that was down 6% from the cryptocurrency-inflated revenue a year earlier, it was up 26% quarter-over-quarter. Gaming revenue has shown accelerating sequential growth for three consecutive quarters, since dropping to a low of $954 million in fiscal year 2019's fourth quarter.

During the third-quarter conference call with analysts, management cited sales growth for GPUs in both desktops and gaming laptops. Co-founder and CEO Jensen Huang also discussed the impact of NVIDIA's ray-tracing technology, which incorporates lighting and shadows to make games look more realistic. When NVIDIA began heavily marketing the RTX series GPUs, not many video games were capable of using ray-tracing technology.

Now, however, the best-known game titles -- including Minecraft, Call of Duty, and Cyberpunk 2077 -- have ray-tracing capability. And, Huang said during the call, "it's fairly clear that ray-tracing is the future." NVIDIA's top competitor, Advanced Micro Devices, hasn't offered ray-tracing GPUs, but multiple reports indicate it could soon.

NVIDIA reported $726 million in data center revenue in the third quarter. Although that was down 8.3% year over year, the figure was up 11% from the previous quarter. That's the company's highest sequential data center growth in six quarters. It's also the second consecutive quarter of sequential growth, following two straight quarters of declines.

Management said revenue from "hyperscalers" (companies that use thousands of connected servers to store information in the cloud) grew both sequentially and year over year. Huang cited the importance of the processing speed that NVIDIA's cards provide.

One of the examples he cited is conversational AI, the ability of machines to effectively respond to humans in real time. Huang noted the breakthrough natural language processing model BERT (Bidirectional Encoder Representations from Transformers) from Alphabet's Google. He said BERT is driving demand for NVIDIA's GPUs, because they can process complex tasks quickly, which is a necessity in a human-to-computer conversation.

Huang also discussed "the edge," which in this case refers to servers that are located closest to where data is collected. The market potential is enormous, ranging from companies to cities that have gathered and stored information. In October, NVIDIA announced the launch of its EGX intelligent edge computing platform; it said it has more than 100 customers, including Walmart, BMW, and Procter & Gamble, along with the cities of San Francisco and Las Vegas.

Management estimated the company would have "strong sequential growth" in data center revenue in the next quarter, and there could be more growth ahead. Spending on artificial intelligence systems will more than double between 2019 and 2023 -- from $37.5 billion to nearly $98 billion, according to estimates from IDC.

As NVIDIA results improved, the stock has risen nearly 60% this year. That raises a question: Is it too late to invest?

The stock's price-to-earnings ratio is 55, which looks steep for a company that Wall Street analysts project will grow earnings by 30% next year. However, it's important to note that NVIDIA has beaten Wall Street's earnings estimates by at least 6% in its last four quarters. In its most recent quarter, NVIDIA's adjusted earnings beat estimates by more than 13%.

It's also worth noting that cash-producing businesses with strong growth prospects are often valued highly, and NVIDIA is no exception. The company has produced $3.3 billion in operating cash flow through the first three quarters of this fiscal year. That cash is available to reinvest in the business to fuel future growth.

As the last year shows, NVIDIA can be a volatile stock that requires patience, but the company is well-positioned. The excess inventory is gone, and the gaming segment is growing again. NVIDIA also seems set to benefit as companies spend more and more on artificial intelligence initiatives. It's a stock worth buying right now with the intention of holding it for years.