Few, if any, consumers order from Domino's (NYSE:DPZ) because they think the chain offers the best pizza around. Most communities have a better option, but what those other chains and local restaurants don't provide is that impressive mix of convenience and value that made Domino's the global leader in pizza sales.

Quite simply, the chain has made it incredibly easy for its customers to get inexpensive pizzas delivered to them fast. It has been a trend-setter in the delivery game for decades, dating back to its old "30 minutes or less" promise and continuing through its development of a cutting-edge app and its order-tracking technology.

Now, the pizza company has upped the ante once again -- it has added GPS tracking to its app. By the end of 2019, customers ordering from about a quarter of its U.S. locations will be able to see exactly where their order is at any given time, and most of the chain's locations will offer the option by the end of 2020. 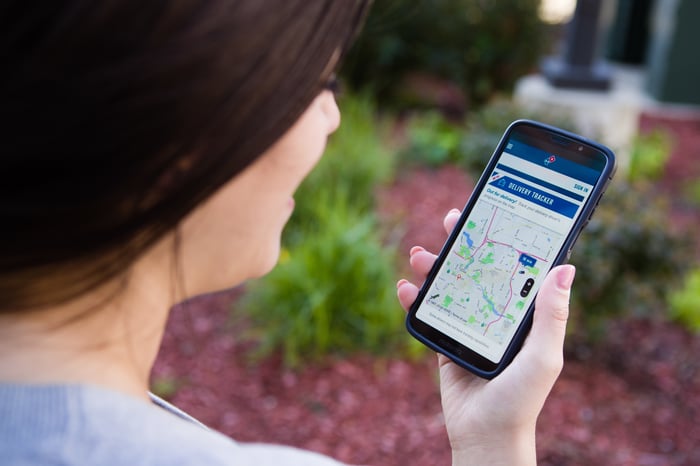 Domino's plans to bring its GPS tracker to most of its U.S. stores by the end of 2020. Image source: Domino's.

Not many years ago, there were only a few national restaurant chains that delivered. Consumers were picking between Domino's and maybe one or two other rivals. In some markets, the pizza chain had the delivery market to itself for a long time.

That, of course, has changed dramatically. Thanks in large part to the rise of third-party players like Grubhub (NYSE:GRUB) and Uber's (NYSE:UBER) Uber Eats, it's possible for nearly any restaurant to offer delivery, and large numbers of them are taking advantage.

Now that delivery has essentially become table stakes for fast-food, fast-casual, and casual sit-down chains, Domino's former edge has evaporated. But to compensate, the company has taken a broad approach to improving its version of delivery, refining its ordering process, upgrading its app, and generally taking the friction out of getting a pizza.

That's what it's doing with GPS delivery. This feature is a next-generation take on its previous order-tracking system, which told customers where their orders were in broad strokes. The new system lets customers track precisely where their order is via the chain's app or on the company's website.

Once a customer orders, they get an estimated delivery time, and have the option of receiving text messages at various points along the way, like when their food is two minutes away or when it has arrived. This isn't new technology -- Uber Eats lets customers track their delivery drivers too -- but it's a big step for Domino's, and one that keeps it near the head of the pack in food delivery technology.

"We know that customers love Domino's Tracker and the ability to monitor their orders in the store. Now they will also be able to watch their orders on the way to their house with our delivery tracker," said Chief Digital Officer Dennis Maloney in a press release. "Customers are not the only ones who love the technology -- store managers and delivery experts do as well because of the transparency it provides and how it improves the delivery experience for everyone."

It's all about execution

Financially speaking, Domino's has been a powerful and steady performer in recent years. It has grown U.S. same-store sales for 34 consecutive quarters, and did the same internationally for 103 straight quarters. That comps growth, which has been matched with a steady expansion of its store base, has been founded principles of efficiency. The company keeps delivering people reasonably good, inexpensive pizzas fast.

Expect that Domino's rollout of GPS tracking will compel many of its rivals to adopt similar tech, eventually. The pizza chain's management has long since determined that in its business, it's better to be reliable with a fairly good product than inconsistent with a better one. It may not stay the case forever, but over the past decade or more, better execution has won out over better food on a consistent basis.