The Michaels Companies' (NASDAQ:MIK) third-quarter earnings, released on Dec. 5, revealed few signs of progress in the arts and crafts retailer's long-awaited turnaround. Michaels reported a 4% year-over-year sales decline to $1.2 billion, and comparable sales slumped by 2.2%. The company also booked an impairment charge of $31 million against goodwill associated with its faltering wholesale business.

Recently Michaels has made a compelling argument that it can revive sales under new CEO Mark Crosby by focusing on "makers," that is, the core crafts hobbyists who are the company's most loyal customers. Crosby has instituted a number of tactical measures under this strategy, which include updating the company's loyalty program, increasing the experiential aspect of shopping at Michaels, and emphasizing products in makers' highest-demand categories of "art, tools and technology, and jewelry." I discussed many of these measures in more detail with my Fool.com colleague Nick Sciple in a Motley Fool Industry Focus podcast recorded in October.

A makers-driven renaissance may take time to execute properly, and in the meantime Michaels' market position will remain vulnerable. According to Cosby, the $36 billion arts and crafts industry is growing, albeit slowly, and by Cosby's own admission in the company's earnings conference call, Michaels' declining sales confirm that its share of the market is shrinking. Market share losses, anemic income under generally accepted accounting principles (GAAP), declining comparable sales, and a high debt load have pressured this consumer discretionary investment since its June 2014 IPO: 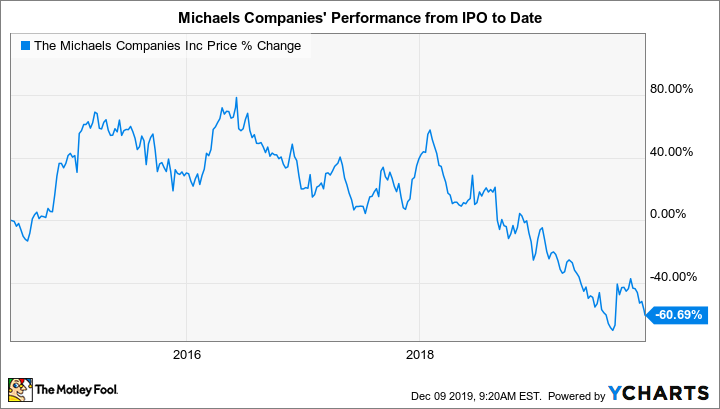 Michaels' response to declining market share has been to steadily add locations to buttress its top line and solidify its position as "North America's largest specialty provider of arts, crafts, framing, floral, wall decor, and seasonal merchandise for Makers and do-it-yourself home decorators." The current quarter is illustrative. In the earnings call, management pointed to the 18 net new Michaels locations that have opened since the third quarter of fiscal 2018 as an offset to its brittle same-store sales, its weaker wholesale business, and the loss of revenue from the closure of the Pat Catan chain in late 2018.

But maybe launching new stores isn't the most appropriate tonic for Michaels' ills. A purposeful sacrifice of market share through the winding down of underperforming locations could result in more fruitful progress. For a management team, ramping up store closures can be a counterintuitive exercise, especially when the executive suite views a greater store count as a key antidote to general underperformance, as Michaels' management team clearly does.

However, closing stores faster than it opens new ones allows a company to jettison the heaviest weights from its aggregate sales declines. And removing the worst locations from an organization's same-store base produces an automatic boost to comparable sales. Engineering better comparable sales is a primary task for all store-based retailers, but it's also one of the surest methods for reinvigorating a languishing stock price.

A significant trimming of stores, say 3% to 5% of Michaels' store base (which would equal roughly 38 to 64 units out of 1,274 locations), would also result in the more obvious wins of improving margins and generating higher cash flow. With the additional cash, Michaels could work on reducing its debt load, which currently stands at a moderately heavy debt-to-EBITDA (earnings before interest, taxes, depreciation, and amortization) ratio of 4.2. Another benefit that shouldn't be discounted is the freeing up of management's attention to focus on higher-potential units. 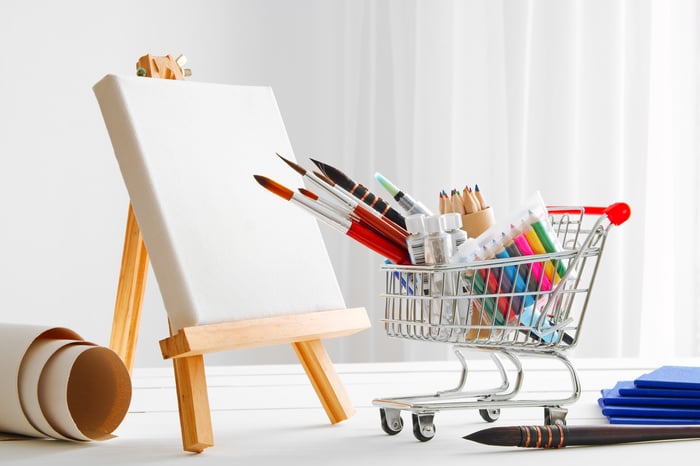 Michaels may seem on the surface to have headed in the other direction regarding store count. In late November, the company decided to pick up some pieces of a rival's business: Privately held Nicole Crafts is exiting the retail business through the closing of its well-known subsidiary A.C. Moore. Michaels has purchased trademarks of the A.C. Moore chain, picked up the lease on a distribution center in New Jersey, and purchased options on leases for up to 40 stores, for cash consideration of $58 million.

This is an opportunistic transaction, as it bolsters Michaels' presence in the Northeast and gives it access to A.C. Moore's customers. Management is planning to convert all stores that it ends up taking over to the Michaels' banner. By next quarter's earnings report, we should have more detail on how many leases the company will ultimately execute.

To conclude, closing loss-producing and marginally profitable locations is a time-honored strategy for retailers like Michaels that aren't quite in dire straits, yet perennially fall short of increased sales and higher profits. Curbing new store expansion and shuttering more underperforming stores would probably increase shareholders' patience and comfort with the new customer-focused, maker-centric business strategy. It would also send a clear signal to the market that the current management team is committed to higher profitability. Ultimately, without a viable path to improved comps and stronger earnings, Michaels' stock may be destined to remain in the bargain bin indefinitely.