In a preview to grocery wholesale distributor United Natural Foods' (NYSE:UNFI) fiscal first-quarter 2020 earnings, I wrote that investors were likely to either embrace the report or flee from it. They ended up fleeing. The company's filing, issued before the markets opened on Wednesday, revealed a massive goodwill impairment charge, smaller additional charges against earnings, and an alarming cash burn. Shares of the consumer staples investment were off roughly 28% in midday trade. As we review what went wrong over the last three months, note that all comparable numbers refer to the prior-year quarter. 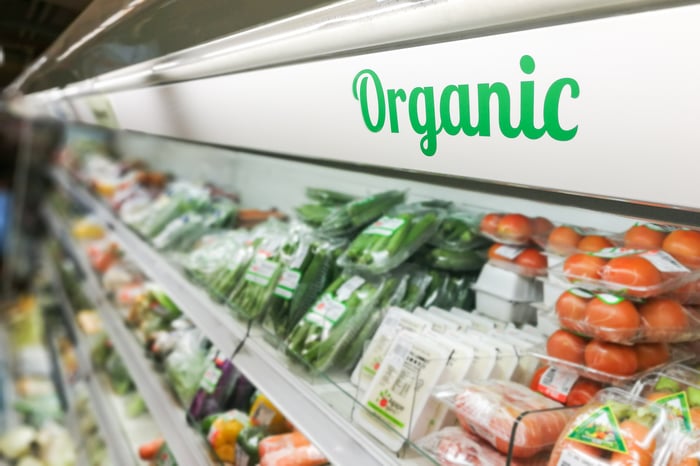 This quarter's massive impairment charge reduces United Natural Foods' total goodwill balance to just $19.8 million -- at least shareholders won't have to worry about future huge charges against this intangible asset! The company noted today that included in the current impairment is a finalization of charges against goodwill from the SUPERVALU acquisition. We can see from the current balance sheet that United Natural Foods overpaid for SUPERVALU by at least $345 million (the original goodwill added to its books at the time of purchase).

Yet intangible asset impairments form just part of shareholders' frustrations today. More at issue are the company's vulnerable gross and operating margins and its cash burn, which is exacerbated by high interest expense due to the leverage undertaken to fund the SUPERVALU acquisition. The organization incurred $49.5 million in interest expense in the current quarter -- that's roughly 3.5 times the amount of its operating income.

Management is sticking to its adjusted full-year earnings outlook for now, even though it's dramatically revised its GAAP estimates. The company still expects adjusted earnings per diluted share of $1.22 to $1.76 in fiscal 2020 and adjusted EBITDA of $560 million to $600 million. Management also left the company's projected net sales range of $23.5 million to $24.3 million intact.

On a GAAP basis, the company anticipates a loss of $324 million to $353 million and a net loss per diluted share of $6.06 to $6.60. The main differences between GAAP and adjusted outlook figures are the noncash asset impairment charges. Judging from today's overwhelming selling pressure on United Natural Foods' shares, a host of investors aren't sticking around to see if the company will hit either its GAAP or adjusted targets this year.