While the results were below what the gunmaker posted last year, new product introductions and the spinoff of the outdoor products company from the firearms business scheduled for late 2020 seem to hold the most promise. 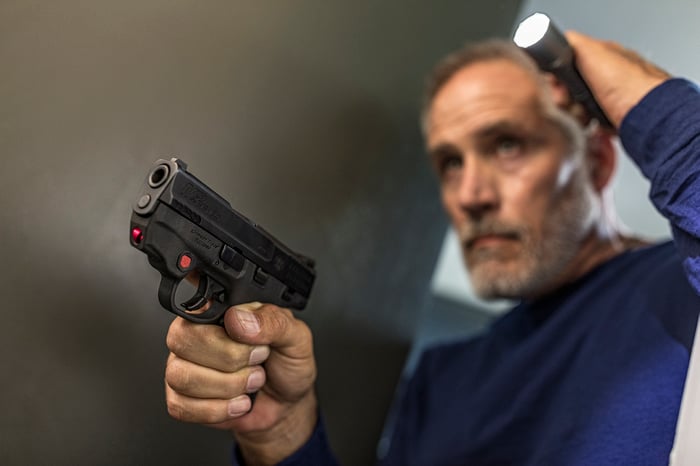 Second-quarter sales fell 4.5% to $154.4 million as firearms revenue was down 5.5% from last year, and outdoor products and accessories tumbled nearly 15%. Much of the decline in firearms revenue was due to fewer long gun sales because American Outdoor discontinued a certain hunting rifle.

In anticipation of introducing a new one at the industry's premiere SHOT Show in January, it pushed out the legacy rifle into its sales channels last quarter so there would be sufficient time for its distributors and retailers to sell off their inventory of it before the new model came online. So even though criminal background checks conducted by the FBI on long gun buyers rose 7.8% in the quarter, American Outdoor's shipments for long guns tumbled more than 30%.

Overall, adjusted criminal background checks jumped 14.8% during the gunmaker's quarter, and its shipments of firearms to dealers and retailers rose 14.2%. American Outdoor doesn't sell directly to the public, but rather only to federally licensed dealers and retailers.

A wave of product launches

It seems more of a problem that American Outdoor's outdoor products and accessories (OP&A) business saw another big drop in sales during the quarter, but management dismissed any concern.

It pointed out that last year's second quarter benefited from large discount orders from two big customers and, although those sales didn't recur this year, management said point-of-sale data shows consumer demand remains strong for its brands. And like the firearms business, American Outdoor has a number of new product introductions coming that should make up any shortfalls now.

Perhaps because CEO James Debney will be moving with the outdoor products business when the company splits in two, he sounded a lot more enthusiastic about the new products in this segment than he was about the new firearms launching. While again not revealing any details, Debney said to expect big things.

American Outdoor will have 15 of the OP&A segment's 19 brands introducing new products next year, one of which will be a completely new brand. The segment will also be entering into six new product categories as well. It's part of the reason the company sees segment revenue growing in the back half of the year.

A better outlook for both businesses

Because of the coming split, American Outdoor is now providing guidance on how it sees each business performing, and for OP&A, it forecasts revenue between $180 million and $190 million. It's already done $81 million worth of sales so far in fiscal 2020, so that leaves around $100 million to $110 million in the second half of the fiscal year.

That might not sound like much, comparatively speaking, but the third and fourth quarters are typically weak for OP&A, and if you look at how American Outdoor did in the segment last year for those two quarters, it is anticipating sales growth of around 30% year over year.

Firearms sales in the back half of the year -- and going forward, really -- will be a little different because of a change in how American Outdoor has to pay federal firearms excise taxes. Previously, it would pay the tax when it shipped the firearm from its Missouri distribution center to a customer, but the Treasury Deptartment's Tax & Trade Bureau now requires it to pay the tax when it ships the firearm from its manufacturing plant in Massachusetts to the distribution center.

While it all comes out in the wash on the bottom line, the change will have the effect of increasing reported revenue while lowering gross margins. In the current quarter, reported firearms segment revenue was actually about $8 million greater than the year-ago period due to the change.

A reason for hope?

Overall, American Outdoor Brands did better this quarter because of a firearms industry that's on the mend. It will likely continue improving, perhaps even dramatically so, as the presidential election draws nearer next year.

Management feels confident the outdoor products segment will also start showing strength, and when the two are separated they will each be financially stable, growing businesses. Still, it seems a lot rests on consumers being as excited about the new product launches as the CEO is.