You can forgive GoPro (NASDAQ:GPRO) CEO Nick Woodman if he sounded a tad exuberant over how his company's new Hero8 Black action camera performed over the Thanksgiving weekend. "We planned for a big Black Friday and Cyber Monday," Woodman said in a statement, "and according to the sell-through data ... we crushed it."

Considering that GoPro hasn't had much to cheer about over the past few years, a lot is riding on the Hero8 Black not just being a hit, but an overwhelming success.

Since much of GoPro's performance since its 2014 IPO seems more like footage from one of its cameras strapped to the helmet of a downhill skier, the Black Friday and Cyber Monday sales results could mean the new Hero8 is the camera GoPro needs to survive. 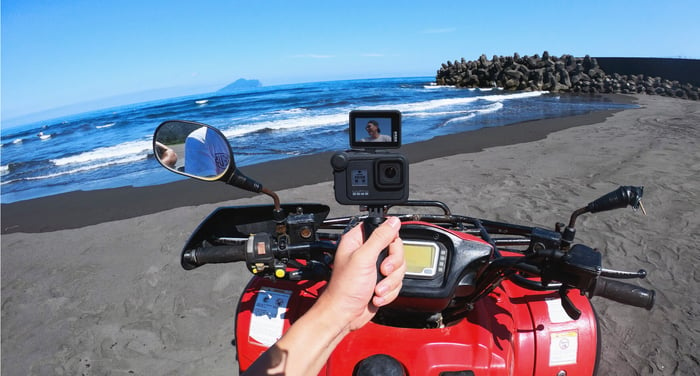 Going all in on the Hero8

GoPro is counting on the new action camera to lift sales during the holidays. Late-stage production delays pushed sales back from the third quarter to the fourth, and effectively killed sales of its Hero7 since buyers waited for the new model. As a result, last quarter's revenue was cut in half.

Needless to say, there is a lot riding on the Hero8, with added pressure because fourth-quarter revenue is expected to be between $550 million to $585 million, which equates to a 50% increase at the midpoint.

It needs this big push because sales have been strained due to increased competition from rival action-camera makers producing cheaper versions, and from smartphones, whose cameras can increasingly perform many of the same tasks as a GoPro (and which we carry with us all the time). GoPro needs a camera that can break through that wall.

It has the additional problem of making cameras that are actually too good. When you buy one of GoPro's tough, durable, and feature-rich action cameras, you don't have to upgrade it for years, if ever. Such long product life cycles mean GoPro constantly needs to bring new users into the family and then upsell them on a GoPro Plus subscription -- a cloud-based platform offering users a camera protection plan and the ability to edit, store, and share the content they create with their cameras.

GoPro has tried several times to spur upgrades by introducing lower priced cameras with fewer features, but that has not succeeded in stopping GoPro's decline. The Hero8 Black could change that, even though at $400 it's a pricey piece of equipment.

The new camera gets positive reviews for changes that make the Hero8 Black almost a different camera from what users have become accustomed to. For example, users don't need any housing to attach the camera to a mount as the capability now comes built in. And GoPro has strengthened the lens glass, added a more powerful battery, and enhanced the camera's software.

It shoots 4K video at up to 60 frames per second, can record slo-mo footage at 1080p, and can live-stream at that resolution. Accessories like a microphone or LED can be attached to the camera.

GoPro reported that holiday weekend sales grew 30% from last year at major U.S. retailers, while European retailers saw a 20% gain. The GoPro.com website registered a better than 120% increase in Black Friday and Cyber Monday sales, with the Hero8 Black accounting for more than 90% of total sales.

One good quarter of sales won't mean GoPro is ready to return to health, but this tech stock might finally have a true winning camera on its hands.