Investors have been worrying over AutoZone's gross margin over the last couple of quarters as management forecast tariff pressures and vowed to absorb higher costs via a program of selectively passing on price increases to customers on a targeted SKU-to-SKU (stock-keeping unit) basis. During the company's first-quarter earnings conference call, management noted that it's both negotiating with vendors and indeed passing on some of the inflation to customers as promised. CEO Bill Rhodes specified that AutoZone would keep its current strategy in place, while adding, "To date tariffs and their impact on our cost in retail has been manageable and not a significant driver of our business results one way or the other."

Investors are sticklers for gross margin growth, and while management teams also strive to lift margins, they are a bit more tuned in to the dollar amount of gross profit generated each quarter. In fact, given a choice, many if not most corporations prefer gross margin dollars to an improvement in gross margin rate.

While the mechanics of this preference are a bit involved (you can read more in this explanatory article I wrote), in simple terms, gross profit dollars are what pay the bills; they cover operating expenses, interest, and taxes -- any remaining profit is counted as net income. An enviable gross margin is meaningless if a company isn't generating enough absolute gross profit to cover fixed expenses.

If gross margin remains steady while sales increase, then total gross profit dollars will expand, as they did this quarter for AutoZone. The organization generated $1.5 billion in gross profit versus $1.42 billion in the prior-year quarter on its flat margin. This rise in gross profit dollars of roughly $80 million absorbed an increase in operating expenses in the first quarter and, coupled with share repurchases, helped AutoZone deliver diluted earnings per share of $14.30 against $13.47 in the prior-year quarter. 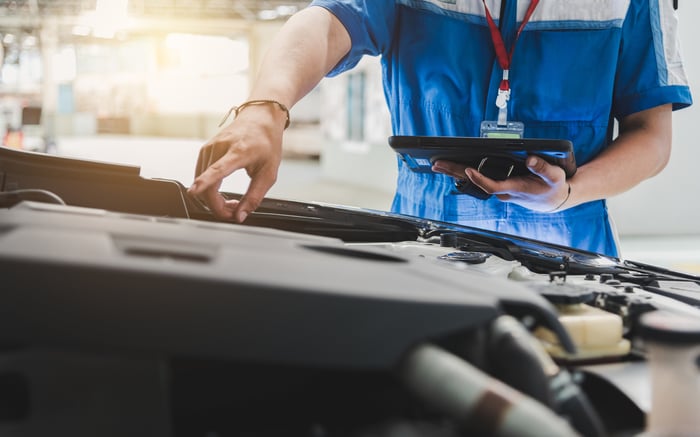 Gross profit dollars are set to rise in the coming quarters

Controlling product margins becomes more powerful if a company has the ability to accelerate its rate of sales growth; eventually gross margin will rise alongside gross profit. AutoZone has several long-term initiatives that will help speed its already crisp revenue growth in the coming years. The most effective project is the expansion of its "hubs." These are larger stores that hold significant inventory and serve as distribution points for smaller stores in proximity. Building out hub stores is the focal point of AutoZone's network expansion strategy.

In the first quarter of fiscal 2020, AutoZone added 11 hub stores, bringing its total to 216. Another way to view this is that the company expanded its distribution capacity by 5% in a single quarter. AutoZone plans to keep adding hub stores at a vigorous pace, including "mega hubs," which currently number 37. During the first-quarter earnings call, CEO Rhodes observed that hubs provide a faster return on investment and higher comparable sales versus smaller stores, and he affirmed that the company plans to keep opening these units "for the foreseeable future."

AutoZone is also pressing to gain market share by expanding its commercial programs at retail stores -- that is, its trade relationships with mechanics, repair shops, auto dealers, and other car-servicing businesses. The company has intensified this effort in recent quarters, and now has commercial programs running in 85% of its store base, but management believes this number can improve further.

With all this plus other long-term projects, such as classifying customers as either DIY (do-it-yourself) or DIFM (do-it-for-me) in order to fine-tune marketing and store product categories, AutoZone is set to build on its quarterly gross profit haul in the current fiscal year and beyond. This automobile industry stock, which has already returned nearly 50% year to date, is positioning itself admirably for further near-term appreciation.