Please ensure Javascript is enabled for purposes of website accessibility
Log In Help Join The Motley Fool
Free Article Join Over 1 Million Premium Members And Get More In-Depth Stock Guidance and Research
By Aditya Raghunath - Dec 14, 2019 at 11:00AM

After underperforming in 2019, this mobile game publisher is set for a turnaround thanks to its strong catalog of games and a robust pipeline.

Gaming stocks have been some of the juiciest picks for investors over the past five years. Heavyweights such as Activision Blizzard, Take-Two Interactive, and Electronic Arts have performed exceptionally well for a good part of this decade. You can see in the chart below how high the stock prices have risen since the end of 2009.

But now, with mobile gaming growing at a solid pace, is it time to bet on niche player Glu Mobile (GLUU)? The industry has shifted to digital gaming and is now expanding to cloud and subscription gaming as well. 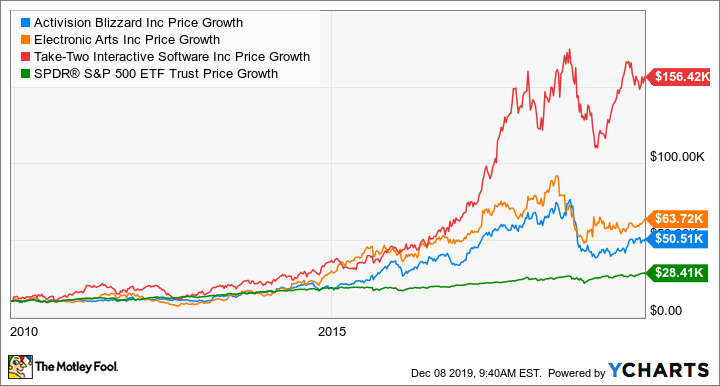 In the quarter ended in September, Design Home generated $45.2 million in bookings, accounting for 37.5% of total bookings, which stood at $120.4 million. Net bookings is a key metric for gaming companies. It includes the net amount of products sold digitally and physically as well as revenue from in-game advertising, merchandise, and licensing fees.

The strong performance was attributed to an increase in average revenue per daily active user (ARPDAU) as well as expanding live-ops and the addition of new gaming features. Live-ops are game play enhancements that drive user engagement higher. This includes adding new features and content, paid user acquisition campaigns, community management, or anything that manages the player life-cycle. For the Design Home game, Glu Mobile expanded live-ops by merchandising and added features like ceiling labs and coastal townhomes.

Quarterly bookings for Covet Fashion were up 28% year over year at $17.2 million on the back of in-game merchandising. Covet Fashion surpassed a billion dollars in lifetime bookings while the net bookings for the Tap Sports Baseball franchise rose to a record high in the six years since the game was launched. Tap Sports Baseball experienced a 22% growth in bookings of $30.1 million, taking its lifetime bookings value to $250 million. These three games accounted for 77% of net bookings for Glu Mobile in the third quarter.

In the quarter ending in September, Design Home and Covet Fashion benefited from a comparatively favorable user acquisition environment compared to the prior two quarters of 2019. This improvement was driven by rational spending that allowed Glu to improve user acquisition investments with a lower cost per installs and higher-quality titles. The cost per install is calculated by dividing the advertisement spending by the number of new installs for a particular period. 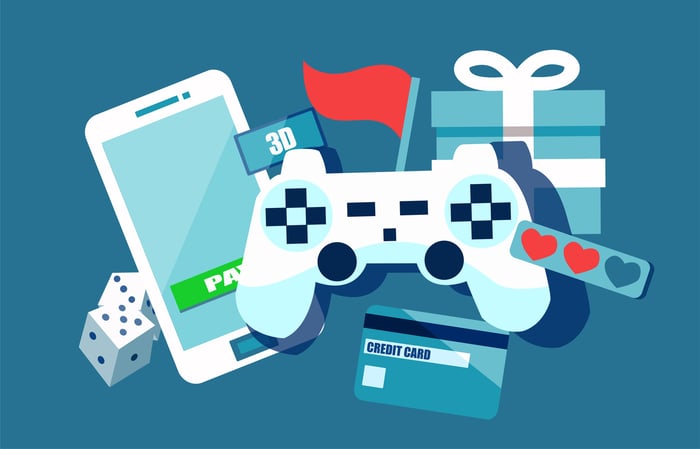 During the earnings call, Glu Mobile CEO Nick Earl said, "The game play and original Glu IP are resonating well with our users as evidenced by strong engagement retention and monetization."

So can Glu Mobile continue to expand sales going forward? And what games are likely to drive this growth in 2020 and beyond?

In 2020, Glu Mobile expects games such as Diner DASH Adventures and Disney Sorcerer's Arena to expand player base.

Diner DASH Adventures has produced strong results in its first full quarter. The game was launched in June and ended Q3 with net bookings of $14.7 million. Glu Mobile increased user acquisition to support the early success of Diner DASH, which drove customer engagement and monetization for the game. In the current quarter, Glu Mobile has already normalized UA spend and expects net bookings to reach $10 million, which is in line with its estimates.

Eric Ludwig, Glu Mobile's COO stated, "For fiscal 2020 we expect the following from our currently live titles: high single-digit percentage increases on a year-over-year basis from our 3 growth games plus a full year of contribution from Diner DASH Adventures. This expected growth should more than offset an anticipated decline in our catalog titles."

Disney Sorcerer's Arena is still in the testing stage and is set for a global launch in the first quarter of 2020. It is a role-playing game that will feature more than 100 Disney characters including Aladdin, Scrooge McDuck, and Robin Hood.

The company is also optimistic about its interactive game Originals, which is fast gaining popularity in the mobile gaming space . This game has been developed by the Toronto studio that created Kim Kardashian: Hollywood.

These games will be vital for Glu Mobile's revenue growth, which is estimated by analysts to rise by 9.2% to $456 million in 2020.

The stock underperformed in 2019

Despite Glu Mobile's encouraging growth metrics, the stock lost 25% year to date. But according to analyst estimates, Glu Mobile's sales might touch $549 million by 2021 while EBITDA might rise to $76.6 million. This rise in profitability will also drive Glu Mobile's free cash flow metrics higher giving it more to spend on product development and innovation.

The global mobile gaming market is forecast to reach $95.4 billion in 2022, up from $62.2 billion in 2018, according to Newzoo. This segment has strong growth potential in China, the largest gaming market in the world, as well as in other South Asian countries.

Global gaming giant Tencent invested $126 million in Glu Mobile back in 2015 for a 14.6% stake in the company. Tencent is the largest gaming company in the world, according to Newzoo, and will help Glu increase its presence in China. In 2018, Glu's revenue from the Asia Pacific region accounted for just 6% of total sales, leaving plenty of room for growth and expansion. That said, any fast-growing market attracts a lot of competition, and the mobile gaming segment is crowded with multiple players.

However, this mobile gaming stock is poised to move higher after the recent pullback, as it continues to benefit from an expansion of scale, resulting in improved margins and solid top-line growth.