Do happy employees translate to happy investors? Not necessarily. However, happy employees often are more productive and interact better with other team members and customers. They're also more likely to stick around, reducing the company's costs related to turnover. Those should all be good for business and could be positive for investors over the long run.

With this in mind, I looked at what the current and past employees had to say about the three biggest Canadian cannabis producers by market cap -- Canopy Growth (NASDAQ:CGC), Aurora Cannabis (NASDAQ:ACB), and Cronos Group (NASDAQ:CRON) -- on popular employment website Glassdoor. And what I found was eye-opening. 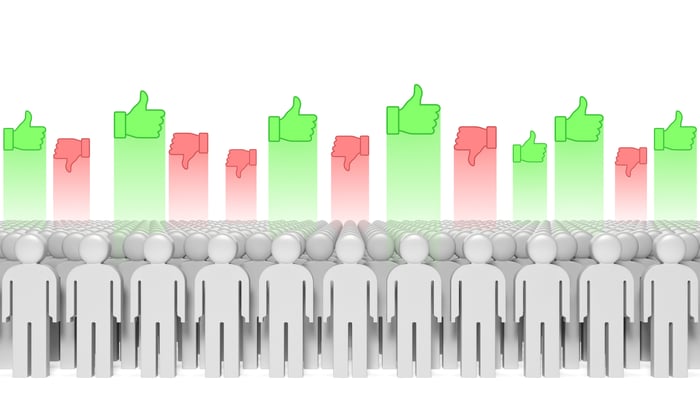 Let's start with the positives. The employees posting reviews about Canopy Growth think quite highly of the company. Canopy received 4.2 stars out of a possible 5.0. That's pretty good -- and (as we'll soon see) a lot better than its top rivals' scores.

Even better, 86% of the employees who reviewed Canopy Growth said that they'd recommend the company to a friend. A whopping 99% of the reviewers approved of Canopy's CEO. It's uncertain, though, which CEO those employees liked so much.

Canopy Growth founder and former co-CEO Bruce Linton was fired in July. His co-CEO Mark Zekulin has led the company since then. Canopy announced just last week that Constellation Brands CFO David Klein will be its new CEO.

Several employees reviewing Canopy on Glassdoor said that it was "a great company." Others said that Canopy was "a productive, energetic place to work," "world-class in every way," and that "hard work pays off" at the company. That last comment isn't all that surprising considering Canopy's share-based compensation that Linton prioritized when he was at the helm.

To be fair, some employees also said good things about Aurora Cannabis and Cronos Group in their Glassdoor reviews. One former worker said the experience at Aurora was "fast-paced, challenging, and rewarding." A current employee called Aurora "an amazing company." One of Cronos Group's current employees said that Cronos is "a great place with great people."

Now for the bad -- and, in some cases, downright ugly -- reviews. Aurora received 2.7 out of 5.0 stars, which is mediocre. Employees reviewing Cronos on Glassdoor gave the company only 1.8 stars. Only 18% of reviewers said they'd recommend Cronos to a friend, compared to 45% saying the same for Aurora.

Some of the comments made by employees about the Canadian cannabis producers were brutal. A current Aurora employee said that the company had "a horrible, toxic, abuse workplace." Another current employee agreed, stating that Aurora had a "toxic work culture and bad management." A former Cronos worker called the company "terrible" and "unprofessional." Another former employee said that Cronos Group's management was "a bad joke."

It wasn't all sunshine and roses for Canopy Growth, either. A current employee referred to management as "incompetent." Two reviewers accused Canopy's management of showing favoritism to some employees.

Others in the industry

After seeing the less-than-stellar scores for Aurora and Cronos along with quite a few scathing reviews, I decided to look at how Tilray (NASDAQ:TLRY) and Aphria (NASDAQ:APHA), the next largest Canadian cannabis companies ranked by market cap, fared on Glassdoor. The verdict? Mixed results.

Aphria received only 2.3 out of 5.0 stars. Tilray, however, received a respectable 3.6 stars. In addition, 65% of Tilray reviewers said they'd recommend the company to a friend while 83% approved of CEO Brendan Kennedy. Both Aphria and Tilray received positive and negative comments from current and former employees.

Is the takeaway here to buy Canopy Growth and avoid Aurora and Cronos? Nope. Investors shouldn't rely on the inside scoop for these companies on Glassdoor for several reasons.

There were only six reviews for Cronos Group. That's not nearly enough to form a solid opinion of how the company treats its employees. Aurora had 34 reviews, which still isn't all that many.

Keep in mind also that the most disgruntled employees are probably more likely to post reviews on Glassdoor. On the opposite side of the equation, some reviews were from human resources staff, which could be at least a little suspect. And while Glassdoor tries to verify that reviewers really are or were employees, it's still possible for fake reviews to be made.

The bottom line is that the best ways to evaluate stocks, including marijuana stocks, are to look at their financial positions and their growth prospects. Employee reviews can help to some extent, but only when there are enough of them to be representative of the broader population of current and former workers.