Hardly for the first time this year, a score of major stock indexes notched new all-time highs on Monday. Not every investor is ready to crack a bottle of bubbly over this achievement, though. Certain top stocks sat this party out, trading down notably on the day because of recent developments. Here's a closer look at two of these market wallflowers. 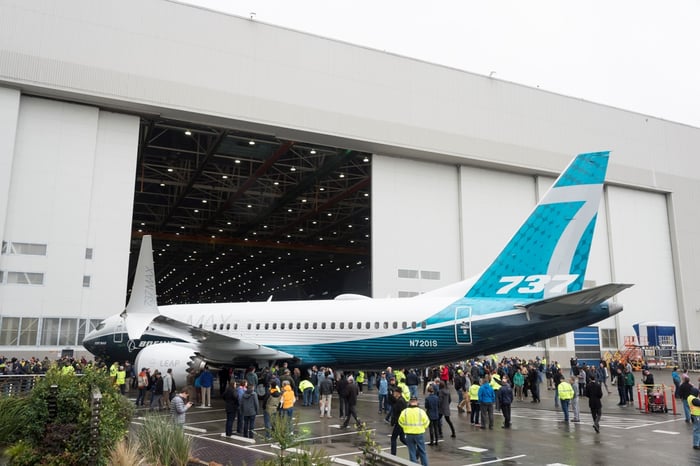 The industrial sector was abuzz today with a hot rumor that Boeing (NYSE:BA) would halt the production of its troubled 737 MAX airplane. Such talk -- which was officially confirmed by the company after market close -- drove the stock down by more than 4% on the day.

The 737 MAX has been grounded for most of this year by regulators around the world, which are investigating two crashes that produced fatalities.

That widespread grounding has forced Boeing into a lose-lose decision: halt production and affect scores of employees and a host of suppliers, or continue to find the capital and real estate for making/storing planes that likely won't fly anytime soon.

"Safely returning the 737 MAX to service is our top priority," the company wrote in its statement Monday night announcing the suspension. "We know that the process of approving the 737 MAX's return to service, and of determining appropriate training requirements, must be extraordinarily thorough and robust, to ensure that our regulators, customers, and the flying public have confidence in the 737 MAX updates."

Boeing had a difficult choice to make, and I believe it's the right one. At the end of the day, almost nobody gains long term from continuing to produce a grounded plane -- not the workers on the project, not the suppliers, and certainly not the company and its shareholders.

Although the move is admirable and unfortunately necessary, it only deepens the uncertainty around Boeing stock. It also raises concerns about the impact to big partners such as General Electric -- which has had plenty of its own problems lately -- and top supplier Spirit AeroSystems Holdings.

Boeing stock should be avoided for now, it almost goes without saying, but investors should also keep an eye out for any announcements regarding the impact to suppliers and other affected companies.

Baozun (NASDAQ:BZUN) was another laggard on Monday, closing down 3.5%.

A China-based tech stock that provides e-shopping solutions for merchants -- crudely stated, that nation's equivalent of Shopify -- Baozun hasn't had it easy these past several months. There's the fear of fallout from the dragging U.S.-China trade war, the loss of a major client (not disclosed, but widely rumored to be Huawei), and disappointing Q3 results. On Monday, Baozun dropped another piece of bad news.

The company said that damage from an October fire at a third-party warehouse in Shanghai it was using for some of its inventory was "significantly greater than previously estimated." Baozun will book a charge of roughly 53 million yuan ($7.6 million) to help cover this.

That's going to hurt the finances for sure; in Q3, for example, it booked a non-GAAP (adjusted) net profit of 59 million yuan ($8.5 million). Of course, the company will probably move past this, but investors get spooked when incidents like this suffer damage "significantly greater than previously estimated" -- particularly when they receive notice nearly two months after the fact.

I can't say I blame shareholders for being annoyed. Perhaps the disclosure could have been handled in a better way, and maybe Baozun could have been better about getting some kind of insurance coverage.

Still, despite its recent hiccups -- that upwards damage estimate is only the latest -- Baozun still has a powerful position on a huge market that lives and dies by e-commerce. Let's not forget that although Chinese economic growth isn't what it once was, it's still on the rise. So, sure, get annoyed at Baozun's handling of the incident, but don't ignore its potential or its growing power. This stock now seems like a buy at a discount to me.