Not for the first time lately, the stock market traded more or less sideways last week. Ultimately, despite the occasional peak and valley, investors in many top stocks didn't see the value of their holdings change drastically.

We're getting into the holidays, so with that season's optimistic glasses on, let's look at two outperformers for the week. Here are the likely reasons for their star turns and whether this recent upward momentum is sustainable for them. 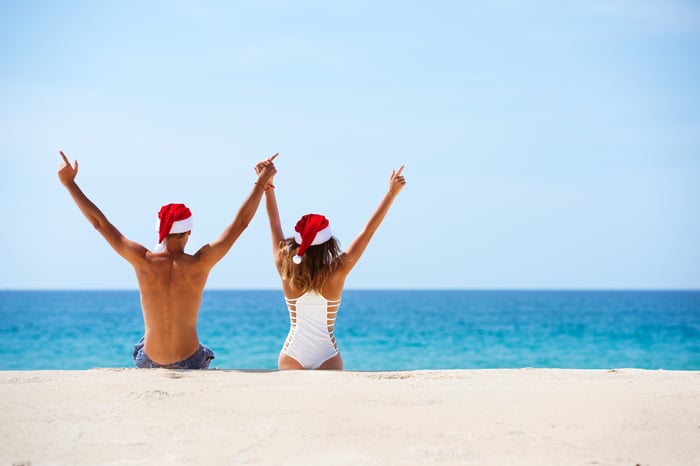 Skyworks Solutions (NASDAQ:SWKS) was a tech stock star over the week's five trading days, rising a very healthy 10% across that span.

Bank of America Merrill Lynch is likely the company to thank for this, as the investment bank completely flipped its recommendation on the stock from underperform (read: sell) to buy. Merrill also slapped a $122 price target on the shares. These moves helped push the semiconductor maker's shares to a two-year high by the time Friday rolled around.

Merrill's research note on the stock noted that the coming of 5G will present a significant opportunity for Skyworks. It essentially argued that consumer take-up will be brisk, as consumers will have little choice but to upgrade in order to benefit from this powerful technology.

I'm not 100% certain that we'll be required to enter the 5G sphere as consumers. Still, it really is a compelling technology with great potential. I think take-up will be quick and strong once its advantages become widely known by the public.

Over the past few years, Skyworks has become known chiefly as a supplier of components for Apple (NASDAQ:AAPL), specifically the iPhone. The challenge with that is now that everyone and their cousin owns a smartphone, sales growth is slowing notably for leading ones like Apple's baby. This affects sentiment not only for Apple and its device-making peers but also for the Skyworks of the world that supply the components.

That was then; let's look to the future. I buy Merrill's bullish view of 5G as a technology, and I believe experienced companies with components that help harness its advantages are poised to benefit very handsomely. Skyworks should still be on any tech stock investor's radar, then, in advance of widespread 5G rollout.

Storied natural gas pipeline operator ONEOK (NYSE:OKE) was another winner this week, albeit at a more modest rise of 2%.

This can be attributed to the completion of the Elk Creek Pipeline, a 900-mile-long natural gas liquids (NGL) transport project. Elk Creek links the oil- and gas-rich Wiliston Basin in the Upper Midwest to a company NGL facility in Kansas. ONEOK says that the pipeline has the base capacity to transport up to 240,000 barrels per day and to bestow "a significant earnings uplift" on results.

No wonder that investors are happy the project is done. It comes at an opportune time, as the company's Q3 results showed that its anchor NGL segment saw a roughly 8% year-over-year decline in profitability.

ONEOK has numerous other projects in development. So the completion of Elk Creek is an encouraging reminder that these initiatives should come onstream before long and start pumping through more revenue and profitability.

Meanwhile, increasing demand for natural gas products should support development, particularly in plays like the Williston Basin. In turn, this should support the growth of ONEOK's fundamentals, not to mention the company's relatively generous payout (it's considered by many to be a choice dividend stock in the energy sector).

Like Skyworks in tech, I feel that ONEOK is a resource company with a good future in front of it. I think a 2% weekly rise in stock price is modest, and there are more gains ahead.