CNH Industrial (NYSE:CNHI) quietly builds trucks, tractors, farm and construction vehicles, buses, and even amphibious armored vehicles -- machines that keep modern life functioning but usually don't make splashy headlines. However, CNH recently inked a new partnership that might give it access to a battery technology breakthrough with revolutionary possibilities – if it lives up to current hype. That could lead to potentially electrifying results for CNH's future strategies and profits.

The sheer variety of vehicles produced across CNH's brand lineup helps buffer it against downturns that hit specialized companies harder. The company introduced 24 new vehicles and other products in Q1 2019 alone, hedging against unfavorable agriculture and construction sector pressures. Nevertheless, sector struggles have taken their toll on CNH, causing consolidated revenues for the first nine months of 2019 to drop 5.2% and adjusted EBITDA to decline 7.8% year-over-year.

While CNH is undergoing some troubles and isn't a red-hot stock, some signs hint it's still strong at its core, so taking the initiative could better its fortunes.  For example, as a dividend stock, CNH posted an 18% payout ratio in its most recent quarter. This shows the company is rolling a solid percentage of its money back into strengthening and extending its business, a promising indicator of corporate health and good planning. And the company's latest bold, potentially profitable move could also help it recover from the 2016 downturn caused by Brexit. 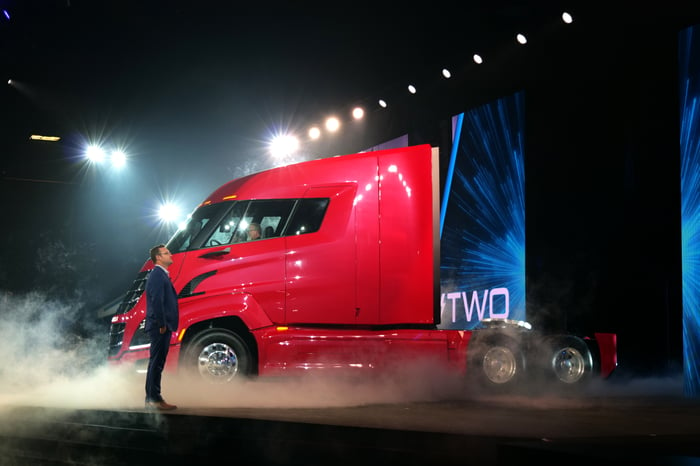 On Sept. 3 CNH's truck brand Iveco formed a partnership with Nikola Motors, an American hybrid truck company start-up whose name honors the first name of famous inventor Nikola Tesla. While details hadn't been publicly announced at the time, the catalyst for this move may have come from from Nikola's claimed development of breakthrough vehicle battery technology.

Described as a free-standing or self-supported electrode with a cathode, this battery boasts 400% the energy density of lithium-ion technology, according to Nikola's press release. Claimed benefits include halving the price of large vehicle batteries, providing doubled range over lithium-ion equivalents, unchanged battery weight or physical dimensions, and construction from eco-friendly recyclable materials. Most significantly for the partnership, the battery allegedly creates the potential to build hydrogen-electric trucks with a 1,000 mile range between recharges, improved by full recharging times of just 15 minutes, rather than hours.

The claims roused both skepticism and speculation among both scientists and competitors. Sam Jaffe of Cairn Energy Research Advisors scoffed, declaring the assertions ludicrous and impossible. He speculates Nikola might have developed a lithium-sulfur battery cell with better performance than lithium-ion, but with nowhere close to the claimed efficiency. A USC chemistry professor, Sri Narayan, disagrees strongly. He states that lithium-sulfur is out of the question because of its early research level across the industry. Instead, he suggests conducting polymers and carbon nanotubes would greatly increase energy storage, and cautiously supports the notion that Nikola's claims could be accurate, were such materials incorporated in its battery.

While the battery won't be publicly demonstrated until fall 2020, CNH extended its new partner $250 million in funding. The partnership also gives Nikola access to Iveco's extensive, well-established truck manufacturing facilities. This will enable rolling out their first joint product, the Nikola Tre, for European truckers. Nikola's CEO, Trevor Milton, claimed the company would enter the European market "like a freight train," and plans to go head-to-head with both battery-only and hydrogen fuel cell versions of the Tre against Tesla's (NASDAQ:TSLA) electric Tesla Semi, a formidable market opponent. The Tre appears to feature a Nikola power system grafted into an Iveco S-Way truck, reducing research and development time before actual production starts.

What's the future of the CNH/Nikola Motors partnership?

If Nikola Motors' claims about its new batteries prove true, it could rapidly become a major player in the growing electric, zero-emission truck market. Energy density and recharge speed are two factors holding back more widespread adoption of hybrid and electric vehicles. Doubling range and slashing recharge time without boosting battery weight, and simultaneously reducing cost, would be a "game changer" worthy of the name – potentially making Nikola's claims of rocketing to first place in truck manufacturers by revenue in the next few years more reality than hype.

However, at this stage, the claims remain publicly unproven. What evidence, if any, CNH based its partnership offer and $250 million funding on is likewise unknown. If CNH's gamble pays off, it has gotten in on the ground floor of a potentially revolutionary advance in electric and hybrid vehicle technology. With the reality of Nikola's claims unverifiable, it's too early to invest in CNH on the basis of its new partnership. However, it may be worth watching as a buying opportunity if solid evidence emerges that Nikola's assertions are true.