As we near the end of 2019 and are fully immersed in the holiday season, shoppers are opening their wallets to spend on gifts and splurge on their favorite items after a year of hard work. Consumer sentiment remains strong, as the U.S. economy managed to grow 2.9% in 2018, with projections for another 2% to 3% growth for 2019. With neither deflation nor rampant inflation threatening to appear anytime soon, it seems the economy is sitting comfortably in a sweet spot at the moment.

Because shopping has become so integral to the U.S. economy in recent years, it's natural to look at consumer brands generally as growth stocks. Investors should be discerning, though, because the competition is generally high in the consumer space due to low barriers to entry. This means that new trends can emerge periodically to upend traditional ways of doing business. The best companies in this space learn how to adapt to these trends and evolve in order to stay ahead of their competitors. 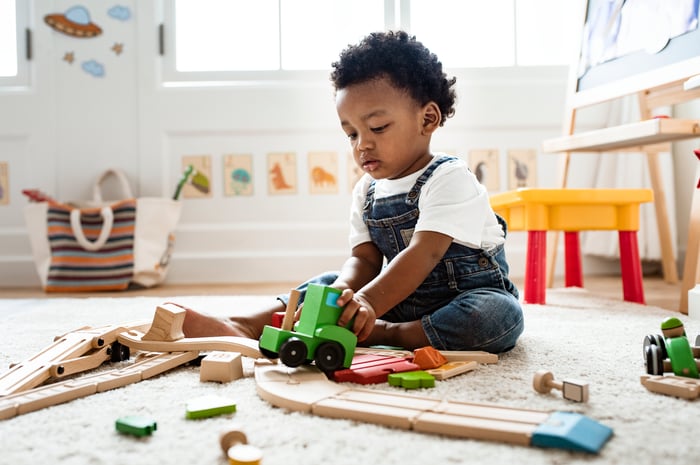 Nike (NYSE:NKE) probably needs no introduction, being one of the largest and most successful sports apparel and footwear companies on the planet. With a market capitalization of $121 billion and a stellar 33.5% year-to-date share price surge, the company has certainly had a fantastic run so far.

In its first-quarter 2020 earnings release (for the period ended Aug. 31, 2019), Nike reported impressive year-over-year growth of 7% in revenue and 25% in net income. Gross margin for the quarter continued to expand, rising from 44.2% to 45.7%. Growth was most pronounced in Greater China, with a 27% year-over-year constant currency increase. CEO Mark Parker commented that Nike has managed to drive double-digit revenue growth every quarter in China for the last five years, an impressive feat considering the world's most populous country has many home-grown sportswear brands such as Anta and Li Ning.

The company continues to build and grow its digital platform with its NIKE app, which drives sales and acts as a one-stop, comprehensive shop for all Nike products. It also allows for higher-margin sales as Nike doesn't have to share profits with retail partners. It is already active in 21 countries and will go live in China this holiday season. Nike is also building up its inventory partnership program and leveraging top social media platforms (along with Instagram) so as to connect with customers. These forward-looking initiatives will continue to drive growth for many more years.

Starbucks (NASDAQ:SBUX) is one of the world's leading coffee chains -- it has a total of 31,256 stores at the end of the fiscal year 2019, a 7% year-over-year increase. With a market capitalization of close to $14 billion, the company continues to serve satisfying cups of coffee to customers all over the globe.

The company's Global Coffee Alliance (in partnership with Nestle since last year) launched three new coffee platforms -- Starbucks by Nespresso, Starbucks by Dolce Gusto, and Starbucks Roast and Ground coffees -- in more than 30 new markets. This partnership with Nestle should open up new revenue streams. It will also extend Starbucks' global reach and accelerate the company's plan to be in 50 global markets in the first half of 2020. The plan is to add around 2,000 net new stores globally next year, with around 600 (30%) of them in China alone.

Starbucks' digital flywheel strategy continues to gain momentum, with all-time-high customer connection scores in the fourth quarter. Starbucks' Rewards loyalty program grew to 17.6 million active members in the U.S., up 15% year over year. Cash dividends have risen by 14% year over year to $0.41 per share, marking the 10th consecutive year of double-digit percentage increases. Investors can look forward to more growth next year coupled with a 1.9% dividend yield.

Hasbro (NASDAQ:HAS) is one of the three largest toy companies in the world, with a portfolio of popular brands such as Transformers, NERF, and Play-Doh. Though Q3 2019 revenues were essentially flat due to the impact of U.S. tariffs on shipments, nine-month year-to-date revenues were still up 3% year over year.

CEO Brian Goldner has announced the launch of "many new product lines" in Q4 2019, along with more dynamic advertising by working hand-in-hand with retailers to drive revenues for the holiday season. Hasbro has also prepared a complete line of fashion dolls based on the new animated movie Frozen 2 by Disney (NYSE:DIS). Frozen 2 had a record-breaking opening weekend, chalking up $358.4 million globally, and this should provide a strong boost to the sale of merchandise associated with the movie.

Hasbro is also reimagining the Power Rangers brand as the series comes to a close this year, while the company is in partnership with Paramount Studios (owned by ViacomCBS) to develop a My Little Pony animated feature for 2021. The ability of the toy giant to leverage its partners to drive content creation is one of the strong points of the business, since it enables the company to keep its brand refreshed and its customers loyal.

Over at NERF, Hasbro has partnered with two companies. In October, the world's first NERF Action Experience, located in Singapore, was opened in partnership with Kingsmen Creatives, while a partnership with Kilburn Live will see a new entertainment touring event NERF Challenge debut in Los Angeles in early December.

With so many exciting developments lined up, investors should look forward to a stronger performance by the company in 2020 and beyond.