In November, Mondelez International (NASDAQ:MDLZ) released a first-of-its-kind study. Entitled the State of Snacking, it revealed that snacking is on the rise worldwide. Of course, it's not surprising at all that Mondelez would release such a report. The company has one of the world's largest snack portfolios, including Oreo, Ritz Crackers, and Nabisco.

Having acknowledged Mondelez's vested interest in snacks, the survey was performed by The Harris Poll on behalf of the company, which gives it more third-party credibility. It shows that 70% of millennials worldwide prefer snacking throughout the day rather than eating big meals, compared with 60% of other adults who feel the same way -- which means this is a rising trend.

PepsiCo (NASDAQ:PEP), Kellogg (NYSE:K), and (of course) Mondelez are three companies with the opportunity to capture this trend's upside, with their global reach and huge snack portfolios. 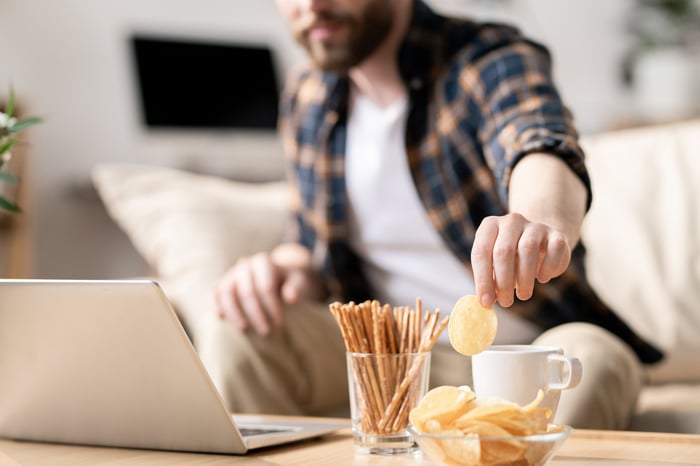 You may think Kellogg is just a cereal company. And it's true that it produces cereal brands from Froot Loops to Special K. But U.S. breakfast cereal sales have been falling for years. Cereal's declining popularity has been on full display this year as Kellogg's North American cereal sales were down 4%, 3%, and 5% in the first, second, and third quarters, respectively.

This is why Kellogg continues to diversify away from cereal and into snacks. Its protein offering, RXBAR, is performing particularly well as consumers look to incorporate healthier snack options, even though they aren't quitting the not-so-healthy ones altogether. Mondelez's survey bore this out as well, as it found that 80% of adults worldwide are looking for "both healthy and indulgent" options.

Kellogg's willingness to pivot when necessary could prove useful in capitalizing on the growing meat-substitute trend. While companies like Beyond Meat (NASDAQ:BYND) and Impossible Foods garner all the media attention, Kellogg is in the mix with its Morningstar Farms division. This brand offers meatless burgers and other meatless products like bacon and chicken nuggets. In Kellogg's third-quarter earnings call, CEO Steven Cahillane said that Morningstar Farms grew sales 11% and gained market share.

As with Kellogg, many people don't realize how diverse PepsiCo's product portfolio is. Yes, it produces carbonated beverages, but the company also has one of the largest snack portfolios in the world. Frito-Lay and Quaker Foods are both PepsiCo divisions. The Frito-Lay division in North America is particularly strong, contributing 24% of PepsiCo's total revenue and 45% of the operating profit in the third quarter.

The State of Snacking report also says that 65% of people are explicitly looking for portion-controlled snacks. In PepsiCo's Q3 earnings call, CEO Ramon Laguarta acknowledged this shift isn't just happening with snacks, but also with carbonated beverages. Consumers are shifting from large 2-liter bottles to smaller portions, and it's messing with the company's cost structure. To combat this, some capital expenditures are going toward producing these smaller sizes more profitably.

Mondelez International owns over 30 snack brands, making it a pure-play on snacks. But the company is not relying solely on its legacy brands and is actively pursuing new options through its SnackFutures initiative. Think of it as a hub designed to funnel good ideas into production-worthy products. For example, the company is experimenting with products made from unusual sources like pumpkin seed protein, green banana flour, and sacha inchi seeds.

But merely being on the right side of consumer trends isn't enough to produce a winning investment. Mondelez's stock has underperformed the S&P 500 index over the past three years due to stagnant revenue. 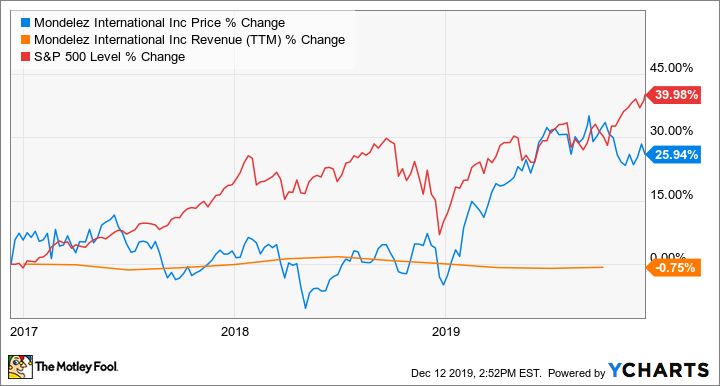 For the first nine months of 2019, Mondelez's net revenue is actually down 1% versus the first three quarters of 2018. Yet over this same time, the cost of sales is slightly up. These numbers differ from the Q3 earnings call, where management gave net organic revenue guidance of 3% growth for full-year 2019. Either way, it's not much growth, and unless growth outpaces costs, this isn't likely to be a good investment.

The point of this wasn't to say that all three of these companies are stocks you should buy today. There's so much more that goes into a food investment than simply being on the right side of consumer behavior shifts. However, if I were to choose one of these companies today, I'd choose Kellogg. It's the cheapest of the three with a forward P/E of 16. And considering the company has "only" $14 billion in trailing-12-month revenue (compared with $26 billion for Mondelez and $66 billion for PepsiCo), the upside from growing brands like Morningstar Farms will be more meaningful to Kellogg's overall top-line growth.