Kroger's (NYSE:KR) partnership with Walgreens Boots Alliance (NASDAQ:WBA) always seemed a bit strange, because it allowed the supermarket's customers to shop online for groceries and then pick them up at their local Walgreens pharmacy.

Sure, that made it convenient for the customer, but it seemed like a duplication of effort for Kroger as it presumably had to pick, pack, and ship the order to Walgreens for the customer to be able to receive it. 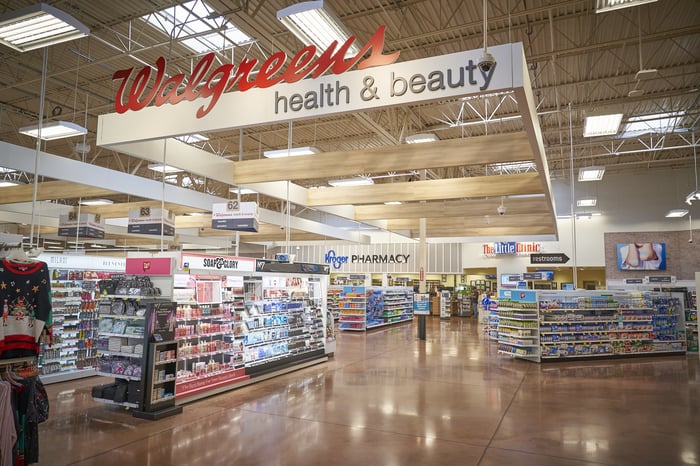 But it seems to work, or has allowed the two partners to further expand their relationship. Kroger, for example, has opened a number of store-in-store express supermarkets inside Walgreens, and the pharmacy has stocked a number of its brands on Kroger's shelves.

Now the two are taking their special partnership one step further and making group purchases together, hoping to lower costs and increase efficiencies.

Both Kroger and Walgreens are facing stiff competition from online and offline rivals. Because they're not as big as Walmart, they don't have the kind of purchasing muscle the retail king does to squeeze as much savings as possible out of suppliers. And Amazon.com continues to drive further into retail and healthcare. It recently announced it would be opening a new grocery store chain separate from Whole Foods, and its acquisition of PillPack last year sets it up as a formidable online pharmacy.

Adopting a buddy system for lumping their purchases together will help Kroger and Walgreens increase their scale, giving them greater negotiating heft with vendors, while reducing costs to lower prices and remain competitive. CNBC reported they will also be looking to see if there are products they can manufacture in-house for each other.

Walgreens co-chief operating officer Alex Gourlay said in announcing the new Retail Procurement Alliance, "Through this unique joint venture, Walgreens and Kroger have the opportunity to use our collective resources to create efficiencies across our supply chains."

The Kroger Express concept launched in December 2018 featured an assortment of up to 2,700 Kroger products for sale at Walgreens. Most of the pharmacies also offer Kroger Pickup service, which lets shoppers place digital orders on Kroger's website or via the supermarket's app, for curbside pickup at a participating store.

Conversely, some 17 Kroger stores carry Walgreens' private-label health and beauty products, including its No7 label that has long been one of the U.K.'s leading skincare brands. Founded in 1935, it was introduced to Walgreens through its merger with Alliance Boots in 2014.

Whether this partnership is enough to change the dynamic for both Kroger and Walgreens remains to be seen.

Kroger has been cutting costs and streamlining services under its Restock Kroger initiative, but it's also undertaken a lot of projects whose ultimate success is uncertain.

Earlier this year, for example, it partnered with Microsoft to use its Azure web services platform to create a "connected store" experience for customers. It's invested in U.K.-based online-only grocer Ocado to operate automated warehouses and deliver orders to customers, and it partnered with artificial intelligence specialist Nuro for self-driving grocery delivery.

Walgreens needs to fight off the challenge posed by CVS Health, which acquired health insurer Aetna, and by the soaring popularity of cosmetics and personal care products from Sephora and Ulta Beauty.

Kroger and Walgreens also hold out the possibility that other retailers will join their consortium. Kroger CFO Gary Millerchip told CNBC, "If another organization thinks they have significant buying in these areas, they could partner with Kroger and Walgreens to save and reduce waste."

That could also allow the partnership to sidestep potential legal issues since antitrust laws generally look askance on such cooperatives, unless they're open to others to join and suppliers have an equal opportunity to service them.

The new purchasing group does show a willingness to think differently about how to approach their respective challenges, and it's a way to expand on their existing relationship. But it doesn't mean that the two retailers haven't chosen a strange way to pursue it.