Professional office environments manufacturer Herman Miller (NASDAQ:MLHR) is set to release fiscal second-quarter 2020 earnings on Thursday before the markets open for trading. As I explained on a recent Motley Fool Industry Focus podcast, the iconic design house can be thought of as a small-cap sleeper stock: Shares have averaged a vigorous total return of 23% annually over the past 10 years. Let's run through a few key numbers and themes that will influence the market's reception to the manufacturer's results on Thursday.

Revenue and per-share earnings guidance for the second quarter

Herman Miller's fiscal first-quarter 2020 revenue improvement of 7.4% fell within something of a sweet spot for the company, as it also advanced its top line by 7.8% for the all of fiscal 2019. For the second quarter of 2020, management has pinpointed revenue of between $685 million and $705 million. At the midpoint of this range, organic growth will equal... 7%.

Management doesn't provide a slew of quantitative earnings benchmarks in advance of each quarter's results. In addition to a revenue forecast, Herman Miller typically projects diluted earnings per share (EPS); for Thursday's report, the company has advised investors to expect EPS of $0.85-$0.89. 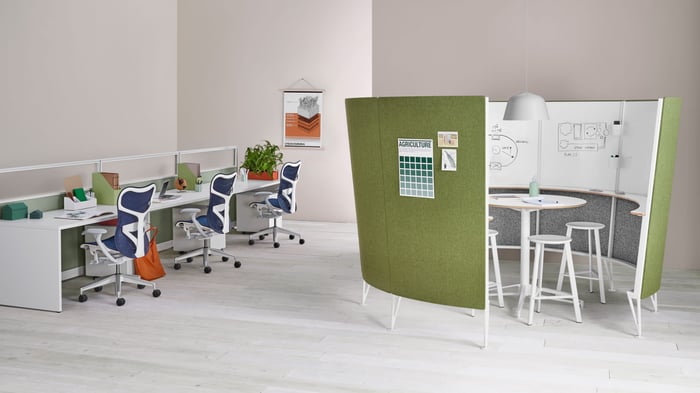 Longtime shareholders of Herman Miller are accustomed to periodic volatility in revenue and earnings, as each quarter's top line is somewhat dependent on the size and scale of new commercial furnishings projects within each of its various geographic markets. Healthy order flow within a quarter tends to quell investor concerns over future revenue.

Based on recent quarters, investors can expect mid-single-digit order flow growth this quarter and a mid- to high-single-digit rise in unfilled orders. Any significant deviations from these trends -- positive or negative -- are likely to affect the stock price on Thursday.

Herman Miller shares have appreciated 56% on a total-return basis year to date, and part of the company's swelling popularity stems from its stable profits. Despite commodity inflation and import tariffs on components used in its U.S.-manufactured furniture, Herman Miller was able to hold its gross margin nearly flat in fiscal 2019, giving up just 50 basis points to 36.2%.

Last quarter, gross margin improved by 70 basis points to 36.7%. The company has increased prices to overcome tariff effects, found efficiencies in its supply chain, and cut costs to maintain profitability. The opening of a new 620,000-square-foot distribution facility last quarter should also help scale gross margin in the coming quarters. Look for gross margin to remain close to 36% in the second quarter, give or take a single percentage point.

The impact of recent acquisitions

In a recent investor presentation, management outlined expected annual revenue growth of 6%-10% over the next three to five years. The company plans to achieve this crisp growth rate by lifting organic revenue by 4%-7% each year, and adding on two to three percentage points of revenue annually from acquisitions.

Indeed, since its latest earnings report, the organization has undertaken two new transactions. In early October, Herman Miller agreed to acquire another 34% of equity in Danish ancillary furnishings specialist Hay A/S for $78 million, bringing its total stake in Hay to 67%. The transaction is expected to add $0.01 to $0.02 to Herman Miller's EPS in the second half of fiscal 2020.

In a similar deal, on Oct. 29, the company purchased the remaining 50% of British collaborative furniture designer naughtone that it didn't already own, for $46.1 million. Herman Miller picked up its initial 50% interest in naughtone in 2016. Management expects the additional naughtone equity to yield $0.01 to $0.03 in incremental EPS in the last seven months of fiscal 2020.

Shareholders can expect management to provide more color on these transactions during the company's quarterly earnings conference call on Thursday. They can also anticipate some discussion of management's overarching acquisition strategy, which, over the past several quarters, has consisted of numerous small yet meaningful bolt-on acquisitions.