The impressive headlines were enough to grab investors' attention last week. Not only did Tandem Diabetes (NASDAQ:TNDM) win the U.S. Food and Drug Administration's clearance of its new insulin pump management platform, but it even spurred the FDA's creation of a whole new category of insulin-dosing technology. The Control-IQ technology is a complete automated insulin dosing (AID) system that offers interoperability with other manufacturers' insulin monitoring devices. In this case, Control-IQ works with Dexcom's (NASDAQ:DXCM) G6 continuous glucose monitoring tool. Other diabetes-management tech companies could make compatible devices in the future.

The rub is that rivals are already nipping at Tandem's heels. In fact, a sizable piece of the insulin-dosing market is rooted in open-source options and do-it-yourself solutions that make a diabetic's smartphone the centerpiece of their self-management effort. 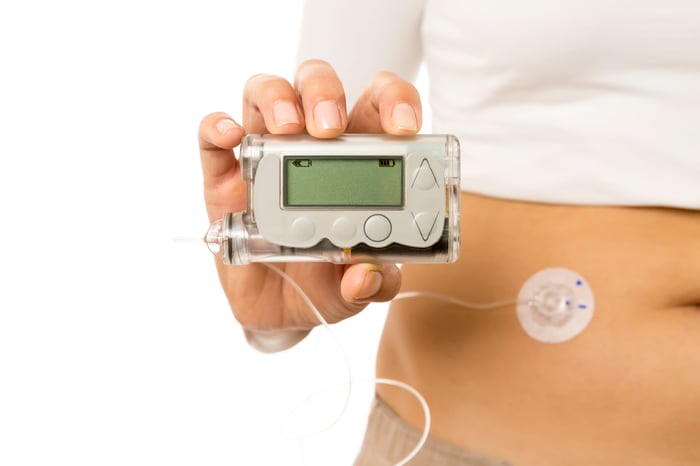 Last week, the FDA cleared Tandem's Control-IQ technology for use with its t:slim X2 insulin pump and Dexcom's G6 CGM, creating the first-ever hybrid closed loop that delivers automatic correction doses to prevent high or low blood sugar levels. The exciting innovation here is the fact that Control-IQ's software is 'interoperable,' meaning this device is compatible with hardware from other manufacturers of diabetes devices.

To people who don't have diabetes, the detail might mean little. But for the 1 million people in the U.S. who have type 1 diabetes, this initially looks like the long-overdue answer to a significant need for reliable insulin-management solutions using devices from multiple makers. Other stand-alone solutions like the MiniMed 670G insulin pump from Medtronic (NYSE:MDT) were initially seen as similar game-changers. But research by the Boston Children's Hospital in 2017 and 2018 revealed roughly one-third of its sample patients -- people with diabetes between the ages of 14 and 25 -- discontinued use of the pump because it was too complicated to manage. Tandem's Control-IQ is different in that it removes the need for constant manual adjustment of the pump and it does so in a clinically verified way.

At stake is a piece of a digital diabetes management market that's estimated to be worth $12 billion by 2025, growing at an annualized pace of more than 20% to reach that figure. The emergence of closed-loop systems like the ones Medtronic and now Tandem Diabetes created is expected to be one of the diabetes management market's key growth drivers.

The FDA's green light for Tandem's Control-IQ platform marks a milestone for the company and for the diabetes management movement. Theoretically, the pump/monitor/software combo could be a mostly automated solution that offers people with diabetes a variety of choices with very little hassle.

It's not a selling point Tandem Diabetes will have to itself for much longer, though, if Medtronic's plans pan out. Its next-generation MiniMed 780G automated insulin dosing system, expected to launch in the coming year, will also make the corrective doses that Control-IQ facilitates. Perhaps even more marketable is that the 780G can connect with smartphones, providing easy access to information about a user's glucose levels.

Beyond that, the Omnipod Horizon from Insulet (NASDAQ:PODD) is expected to become available in the latter half of 2020. As is stands now, that insulin pump will be entirely manageable from a smartphone rather than requiring a device attached to a pump and monitor.

France's Diabeloop has also seemingly toyed with the idea of marketing its EU-approved DBLG1 closed-loop insulin monitoring and pump system. Medtronic's 670G is available in Europe, but Diabeloop's DBLG1 is the first and only such system that -- like Tandem Diabetes' technology -- offers interoperability with other companies' hardware and devices. Clearly the FDA is now OK with the idea.

Other healthcare companies are likely to start eyeing this innovation now that Tandem has validated the idea.

Despite the FDA's warning in May 2019 that DIY solutions for diabetes management can be dangerous, the DIY diabetes management community has organized which in turn, gave rise to free availability of the open-source artificial pancreas software that makes this development possible using older, sometimes secondhand equipment. A nonprofit called Tidepool is also working on open-source software called Loop, which will initially work with Insulet's Omnipod, Medtronic's MiniMed, and Dexcom's G6 and is also intended to be an FDA-regulated platform.

Aside from the sheer cost of new and fully branded closed-loop systems, some people with diabetes simply like the idea of nonproprietary options, which tend to offer more functionality than regulator-approved ones. Whatever the motivation, it all works against demand for Tandem's Control-IQ.

Such closed-loop systems are the future to be sure, and adding interoperability is a nice touch. As it stands now, though, it doesn't look like this innovation will be enough to rekindle the slowing growth comparison that made Tandem such a strong performer last year.

That's not necessarily disastrous. Its fiscal trajectory should still push it out of the red next year, and analysts' profit estimates for the following year are compelling. It's progress the market can latch onto. But even at its present pace, Tandem Diabetes' current company value is more than 100 times 2021's expected earnings. That's rich even for a high-growth name like Tandem. It's especially pricey when the company's latest breakthrough is already slated to face stiff competition that could alter growth expectations in the meantime. 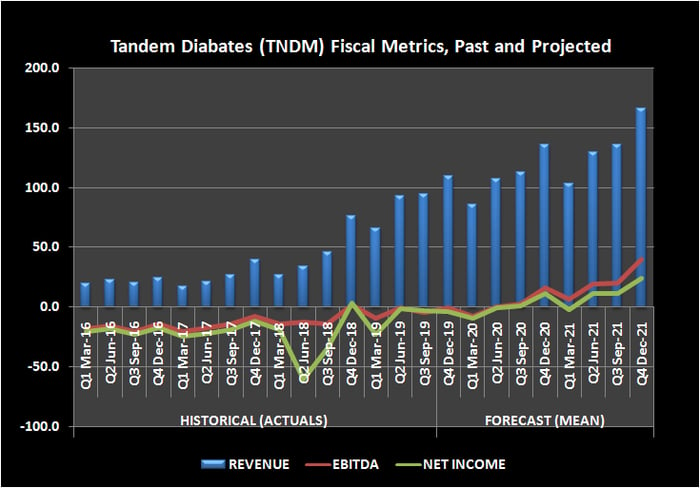