Consumer spending accounts for roughly two-thirds of the American economy. Increased consumer spending usually leads to higher corporate profits, which in turn results in stock prices growing. Getting different perspectives and insights into how consumer spending is shaping up is helpful to investors who want to better inform their decisions.

JPMorgan Chase (NYSE:JPM), Bank of America (NYSE:BAC), and Wells Fargo (NYSE:WFC) are the biggest banks in the U.S. under a variety of measurements. Collectively, the big three have 104 million digital account holders and more than 13,000 retail branches across the U.S.

These three banks offer unique insight into the financial conditions of the group who make up the lion's share of the American GDP. Here's what their recent earnings releases tell us about the future of the U.S. economy. 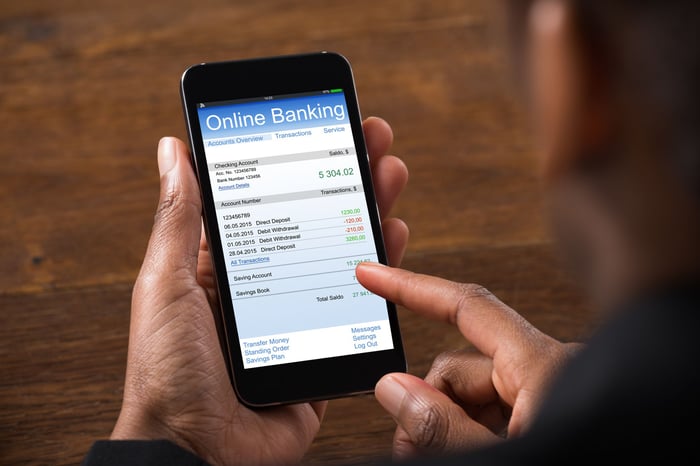 What did Bank of America's quarterly statement reveal about consumers?

Bank of America is the largest U.S. bank measured by domestic deposits, with more than $1.35 trillion. Its report provides an essential barometer into consumers' financial health. Customer deposits, which is money placed in checking and savings accounts, increased 3% to $709.3 billion up from $687 billion in the same period a year ago. The increase in deposits means more purchasing power for its account holders, a better ability to pay debt obligations, and a cushion against an economic emergency.

Purchases through cards issued by Bank of America increased 6% to $162 billion from $150 billion a year ago. More card transactions combined with the growth in deposits are an encouraging glimpse into the state of U.S. consumers.

Consumer net charge-offs, meaning the amount of money the bank lent and does not expect to receive back, declined from 0.97% to 0.48% year over year, indicating a financially healthier consumer. All three data points considered, Bank of America's statements show that consumers are continuing to provide a boost to the economy through increased spending while increasing deposits they hold in checking accounts, and meeting their debt obligations at historically high levels.

Wells Fargo is the third-largest U.S. bank measured by domestic deposits with $1.29 trillion. The unauthorized account creation scandal revealed in 2013 took a huge toll on the bank, which is still in the middle of the rebound.

It did manage to grow customer checking accounts 1.5% year over year, although the report mentioned substantial promotional activity to acquire those accounts. Its report also indicated solid purchasing activity with combined debit and credit card spending up nearly 6% to $113 billion up from $106.5 billion a year ago.

Consumer net charge-offs dipped slightly to 0.46% compared to 0.47% in the year-ago period, which is near its historic lows. The biggest driver for the dip was a decline in auto loan defaults. Wells Fargo didn't report as large of a drop in defaults as Bank of America, but it was starting from a historically low default rate from last year.

Is JPMorgan Chase taking a bigger risk on the credit side?

The second-largest U.S. bank measured by domestic deposits with $1.31 trillion reported that its average deposits were up 3% year over year. Led by CEO Jamie Dimon, who many consider a top business leader in the country, JPMorgan reported that debit and credit card spending increased 9% to $282.2 billion from $259 billion the same period a year ago. This increase is the most significant of the big three banks, and it swelled from a base of spending that was also the largest.

Consumer net charge-offs actually increased by $181 million to $1.26 billion from the same period a year ago, driven by credit card delinquencies. Out of the three banks, JPMorgan is the only one to report an increase in charge-offs, which could result from company-specific credit lending practices.

The reports from the top three U.S. banks showed positive trends in the financial strength of consumers, with average deposit volumes rising, spending across debit and credit cards increasing, and defaults on loans mostly decreasing to historic lows. Consumer data from the biggest banks complement macro data showing that consumer incomes are rising faster than inflation, a personal saving rate that has stayed above 5% of disposable income since 2010, and an unemployment rate remaining at historically low levels.

Interest rates are lower now than at the same time last year, which usually stimulates consumer spending and makes it easier for people to pay back variable rate loans. It can also allow homeowners to refinance their mortgages at a lower interest rate. Therefore, with lower interest rates compared to a year ago, fears of a recession have subsided.

The big banks were a significant cause of the last recession because they took on excessive risk and held insufficient capital to balance those risks, and later had to be bailed out. As a result of the bailouts, the banks must undergo annual stress tests starting in 2011, which is a what-if scenario to determine if the bank has sufficient assets to survive during periods of economic stress. According to these tests in June this year, the Federal Reserve determined, the three banks have enough capital to survive a severe recession.

In the previous recession, the personal savings rate had not surpassed 5% in the preceding two years. Additionally, households are less leveraged as measured by debt service payments as a percent of disposable personal income when compared to the period preceding the previous recession. Therefore, the next recession should not be as steep or as prolonged as the previous one. Given the relatively healthy financial state of the consumer, the investor with cash on the sidelines should be ready to buy dips in the market caused by recession fears.