The U.S. Food and Drug Administration has approved more than 145 new drugs since the start of 2017, and a few more could join their ranks in the remaining days of this year. A quick search of the National Institutes of Health clinical trial database finds that pharmaceutical and biotech companies sponsored an astonishing 10,148 clinical trials in the U.S. that are either underway or recruiting patients. That figure does not include trials being run by academic groups or government agencies, such as the National Cancer Institute, nor does it include trials being conducted outside of the U.S.

Even the biggest pharmaceutical companies may need some assistance in managing all these studies. That's where contract research organizations (CROs) step in. These companies help set up, operate, and collect the data from various clinical trials, sometimes in other countries. This allows drugmakers to conduct trials in nations where they have no corporate presence, and it reduces the need to hire and fire people as the studies start and finish. 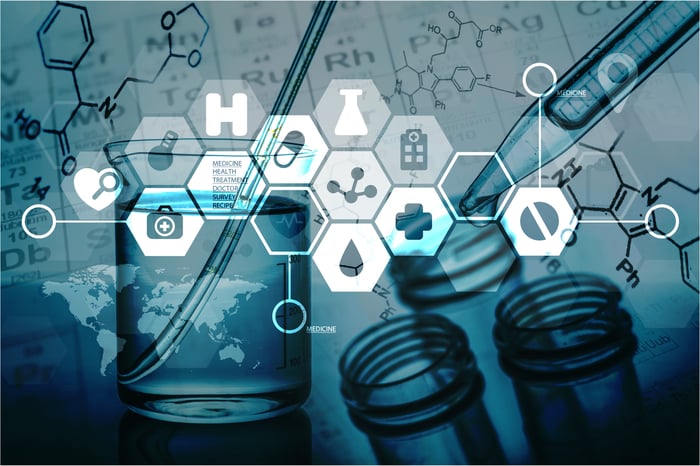 CROs generate billions in revenues providing these services. Among the most prominent publicly traded CROs are IQVIA Holdings (NYSE:IQV), Medpace Holdings (NASDAQ:MEDP), PRA Health Sciences (NASDAQ:PRAH), and Syneos Health (NASDAQ:SYNH). Most have expanded their offerings into additional facets of the drug development process such as pre-clinical testing, regulatory affairs, market analytics, and development strategy consulting. Some will even build a sales force and sell drugs for their clients.

IQVIA stands out from the pack due to its sheer size. It was formed from the merger of the Quintiles, one of the biggest global CROs, and IMS Health, a leading information and technology company focused on healthcare. Today, it boasts a market cap of $29 billion and has 58,000 employees around the world.

Let's take a quick look at the numbers for these four CROs to see how they stack up.

In some instances, CROs seek to get cozier with their clients. In 2016, Japanese pharma Takeda Pharmaceutical (NYSE:TAK) formed a "transformational" partnership with PRA Health Sciences under which the CRO essentially took over responsibility for clinical trials, interactions with regulatory agencies, and safety reporting for marketed drugs. This was expanded into a separate joint venture in Japan. Earlier this year though, PRA Health Sciences bought out Takeda's piece of the venture. No doubt, Takeda's $62 billion acquisition of Shire played a role in that outcome.

Which investors own CROs?

Most broad market indexes and mutual funds have some exposure to these companies. Well-known money management firms BlackRock (NYSE:BLK) and Vanguard own sizable percentages of each of them. BlackRock owns 5.5% of IQVIA on the low end, and 11.6% of MedPace on the high end. Likewise, Vanguard's sizable stock holdings range from a 6.85% stake in Syneos and a 9.9% stake in MedPace.

Prominent private-equity firms also maintain large stock positions in these CROs, and those stakes provide some insight into their early backers. For example, TPG Capital owns 6.4% of IQVIA. Advent International and Thomas H. Lee Partners hold 21.6% and 18.54%, respectively, of Syneos' stock. KKR's stake in PRA Health Sciences comes in at 10.2% of the company. The outlier here is MedPace. However, its founder and CEO owns 21.6% of the company, so his interests are aligned with those of the shareholders.

What does the future hold for CROs?

CROs occupy a unique position within the drug development ecosystem. Pharma and biotech companies will continue to develop new therapies no matter the state of the economy. CROs provide them with an option to outsource parts of the process, which gives them more flexibility on headcount and resources.

Since clinical trials, especially larger, late-stage studies, require multiyear contracts, CROs provide updates on the size of their current backlogs, and those updates give investors some insights into their future revenues. At the end of the third quarter, IQVIA touted a backlog of $18.3 billion for its R&D solutions business, which is responsible for running clinical trials; $5.1 billion of that is expected to convert to revenue in the next 12 months. The backlog at the end of September for PRA Health Sciences' clinical research segment sat at $4.6 billion. Syneos reported nearly an $8.3 billion backlog in its third-quarter earnings release, and $7.8 billion of that came from its clinical services work. Lastly, Medpace's backlog of $1.2 billion is up 19.9% from a year ago.

What about stock performance?

This has proved to be a pretty good year for CRO shareholders. Medpace and Syneos soared 53% and 42%, respectively, year to date. IQVIA's performance basically mirrored the S&P 500 with a gain of 29%. Meanwhile, PRA Health Sciences trailed the pack, but even its stock is up a respectable 17% as we approach the end of the year.

By investing in CROs, healthcare investors position themselves to profit from the huge amounts spent on pharmaceutical R&D each year, but without exposing themselves to the often whipsaw-like stock moves of development-stage drug companies. Given that there's no reason to think drugmakers will stop outsourcing clinical trials and other development activities, these stocks should be solid long-term buy-and-hold investments.