When any given stock rallies 10% in short order, all too often the move can be attributed to a single encouraging culprit -- whether it's a strong quarterly report, an analyst upgrade, or some other significant breaking news.

In the case of Tesla (NASDAQ:TSLA) this week, however, the electric-vehicle (EV) maker and solar-solutions leader has rallied nearly 10% since Monday morning to touch a fresh all-time high Wednesday. And investors can thank a confluence of no less than four separate pieces of positive news for that rise, including:

First, Tesla started the week by climbing nearly 7% on Monday following reports that House Democrats were considering a bill to extend a significant tax credit for electric-vehicle buyers. Keeping in mind the current $7,500 federal tax credit begins to phase out once a vehicle manufacturer sells 200,000 EVs in the United States -- a level Tesla has already hit -- the bill sought to increase the threshold to 600,000 EV unit sales while reducing the credit to $7,000.

To be clear, however, Tesla's initial pop faded later Monday afternoon after it became clear the bill would not move forward given fierce opposition from the White House. Still, it was enough to kick off the week by piquing the interest of the market.

But that wasn't the only reason Tesla climbed on Monday; its gains reaccelerated after longtime Tesla bear Dan Levy of Credit Suisse reiterated his "underpeform" rating and $200-per-share price target on the stock, but also conceded that "Tesla is leading in the areas that will likely define the future of carmaking -- software and electrification."

Levy elaborated that following a visit to Tesla's Gigafactory 1 in Nevada, his team came away noting that "Tesla is likely ahead of others on batteries -- the core of the electric powertrain," and that the company will almost certainly highlight its resulting competitive advantages at its upcoming "Powertrain Day" presentation with investors.

Of course, Levy's opinion on Tesla stock remains undeniably bearish. And he further suggested Tesla could struggle with growing competition as other well-funded manufacturers release their own EVs. 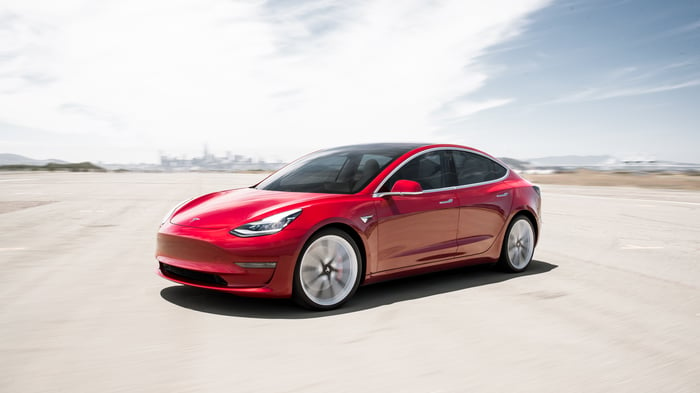 That said, it's not exactly smooth sailing for Tesla's competitors today; Tesla stock also gained steam after news that Daimler's Mercedes pushed back the U.S. launch of its first mass-produced electric vehicle, an SUV dubbed the EQC, by a year to 2021. Mercedes cited its strategic decision to prioritize meeting "growing demand" for the EQC in Europe, where it debuted earlier this year.

Mercedes' decision echoed a similar move made just last week by Volkswagen, which revealed its new ID.3 electric hatchback model will only be available in Europe due to expected weak demand stateside for such a vehicle. Instead, Volkswagen says it will launch a new crossover concept EV for the United States market starting in 2022.

To be fair, Tesla's U.S. sales declined a whopping 39% year over year last quarter to $3.13 billion -- largely a consequence of the relative strength of its lower-priced Model 3 vehicles -- leaving it rightly focused on maximizing growth in the budding Europe and China regions. But repeated delays from competitors looking to eventually enter the lucrative U.S. market surely didn't hurt investor sentiment.

Even then, further fueling Tesla's recent rally was a surge in optimism surrounding its new Gigafactory 3 in Shanghai, China. Analysts at Oppenheimer, for example, noted as much early this week, musing that "expectations for a relatively smooth ramp for the Shanghai facility are increasing" after photos of China-made Model 3s began to hit the internet.

Sure enough, several pro-Tesla websites subsequently reported that the earliest Chinese Model 3 reservation holders had received delivery notices from the company, indicating the imminent arrival of their respective vehicles. Other industry watchers analyzed drone images and inside sources suggesting Tesla has already ramped up to an output of 1,000 Model 3s per week in China -- a goal it previously aimed to hit by the end of 2019 en route to its longer-term target for 3,000 units per week.

Then late Wednesday, Bloomberg reported Tesla is already exploring ways it might be able to to reduce costs in China in order to reduce Model 3 prices by at least 20% by the second half of next year. Some investors unsurprisingly worried that this could indicate Tesla is already concerned about weak demand given a broader slump in from the Middle Kingdom. But the same report also said Tesla would achieve the price reductions by using "more local components" and avoiding tariffs -- indicating it simply wants to pass the savings on to Chinese consumers in an effort to take market share rather than padding its own margins in the process.

But taken together, these bullish events gave bearish investors precious little ground to stand on in recent days. And Tesla stock has responded in kind.