Memory chip manufacturer Micron Technology (NASDAQ:MU) managed to beat analyst estimates across the board when it reported its fiscal first-quarter results on Wednesday, but expectations weren't exactly high. Revenue crashed 35% year over year, and adjusted earnings per share plunged 84%.

An oversupply of memory chips is hurting Micron's results, and the bonanza of 2017 and 2018, when memory chip prices soared and Micron's profits hit record levels, is making the comparison all the starker. 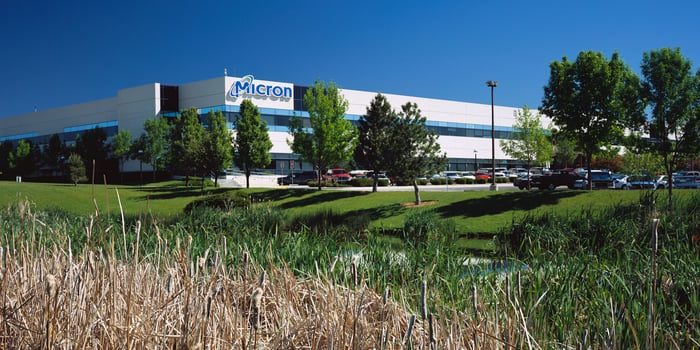 The bottom is here

The good news is that the bottom appears to have finally arrived. "Recent trends in our business give us optimism that our fiscal second quarter will mark the bottom for our financial performance, which we expect to start improving in our fiscal third quarter, with continued recovery in the second half of calendar 2020," said CEO Sanjay Mehrotra during the earnings call.

The less good news is that there's no telling at this point what the recovery will look like. Will it be V-shaped, with shortages driving memory chip prices substantially higher? Or was the collapse in prices this year simply a correction for the excess of 2017 and 2018?

Remember: Per-bit memory chip prices generally decline over time. Substantial price increases are rare, requiring anomalous shortages that don't happen often. Since 2005, Micron's per-bit average selling prices for dynamic random-access memory (DRAM) have only increased four times. The first was in 2010, following brutal price declines in 2008 and 2009. The second was a small increase in 2014 that was quickly reversed. The other two were in 2017 and 2018.

Demand for memory chips has been recovering, but it so far hasn't stopped prices from declining. In the first quarter, DRAM sales volume was up about 10% from the previous quarter, but average selling prices slumped by a high-single-digit percentage.

NAND memory chips did better, with a mid-teens percentage sales volume increase and a low-single-digit percentage price uptick. But that performance was partly due to the company's shift toward high-value NAND products.

Micron expects industry DRAM bit supply growth to be outpaced by demand in 2020, which should help the price situation. But forecasts in this industry mean little. The company certainly didn't anticipate the brutal price declines of this year, so take its outlook with a grain of salt.

For the second quarter, Micron expects to produce revenue between $4.5 billion and $4.8 billion and non-GAAP EPS between $0.29 and $0.41. Both are down from the first quarter and way down from the prior-year period. Presumably, the bottom line will start to improve in the third quarter.

By the way, Micron's outlook "assumes that there are no perturbations to the demand environment due to macroeconomic conditions or trade-related development," according to Mehrotra. Good luck with that.

A recovery for Micron has already been priced in: The stock is up more than 70% this year. Based on the average analyst estimate for fiscal 2020, Micron trades for more than 22 times earnings. Earnings could rise well beyond that if chip prices firm up, but they could also not if the pricing environment doesn't improve much next year.

The worst of the memory chip downturn is over, and the downturn itself may end within the next few months. But a return to the record profits of 2018 for Micron doesn't look likely.