Microsoft (NASDAQ:MSFT) unveiled the Xbox Series X on Dec. 12, and the next-gen system is quite large compared to earlier consoles. The upcoming hardware will launch late next year and looks strikingly similar to a PC tower with big air vents at the top. Reporting from WindowsCentral suggests that the new console is nearly twice the overall volume of the Xbox One X -- a system that's already pretty hefty.

What's known about the upcoming platform's hardware specs points to the Series X being a beast performance-wise, and the unusual design likely stems from the need pack a lot of high-performance tech in the box without running the risk of overheating. Sony's (NYSE:SONY) next console is said to be very powerful as well. The new consoles launching with unusually strong hardware highlight shifts in the gaming industry, including the need to support new display formats and fend off competition from game streaming platforms. 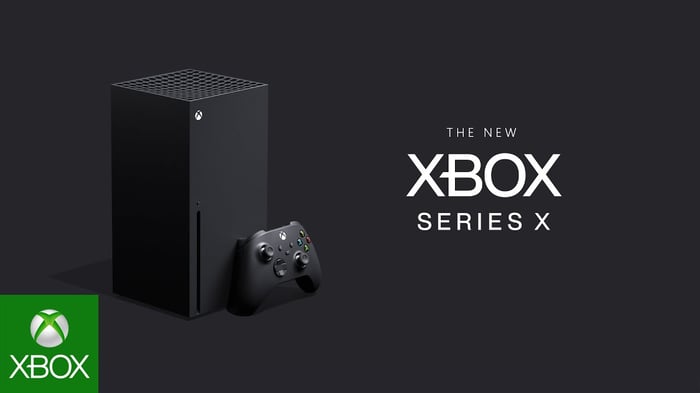 The biggest box yet

The Xbox Series X represents a significant divergence from mainstream console design, and the shift to a more PC-like aesthetic is probably happening by necessity. Here's Phil Spencer, the head of Microsoft Xbox division, talking about the upcoming platform's capabilities and look: "Its industrial design enables us to deliver four times the processing power of Xbox One X in the most quiet and efficient way, something that is critically important in delivering truly immersive gameplay. We also designed Xbox Series X to support both vertical and horizontal orientation."

Setting up the console to rest horizontally will mean it looks much less like a PC tower, but the Series X is still on track to be the bulkiest mainstream system ever.

The next Xbox and PlayStation consoles are being built to support 4K screen resolutions as a standard offering, and rumors suggest they will also be able to support 8K resolutions at 120 frames per second in some instances. Rendering a true 4K resolution image requires producing four times the pixel density of 1080p, and next-generation games will also bring increasingly complex graphical models and effects. Delivering those levels of increased visual fidelity combined with the extra bells and whistles that will allow a console to keep up with industry changes over at least a five-year life cycle mean that the hardware form factors are seeing big changes.

Spencer has indicated that virtual reality (VR) isn't a big focus for his team with the the next-gen Xbox because the company isn't seeing much demand in the category, but the hardware will be powerful enough to support high-quality VR if the company sees reason to change course later in the console cycle. Sony, on the other hand, is putting substantial resources into developing VR on the next PlayStation.

Photos of the next-generation PlayStation development kits also show large air vents, and while the design of the actual system could be significantly different, Sony's upcoming platform will likely differ significantly from the PS4. It looks like the two console makers are changing their approach to the market in anticipation of industry trends.

The current -- albeit largely incomplete -- rundown of specs for the Xbox Series X points to the console being on par with a fairly powerful modern gaming PC. Consoles are usually somewhat underpowered relative to midrange dedicated-gaming PCs at the time of launch, but it looks like the Series X will break from this dynamic. Part of that strategy is likely due to needing to fend off a growing number of competitors.

Google's Stadia platform got off to a rough start, but streaming gaming presents a real threat to the traditional console games industry. Amazon will reportedly launch its own game-streaming platform sometime in the not-too-distant future, and Microsoft and Sony need to makes sure that the hardware they put on shelves has staying power and can hold up against increasingly powerful server-side gaming experiences. Apple is also making a bigger push into gaming, though it doesn't seem very focused on streaming at the moment.

Packing the Series X with powerful hardware also makes sense for Microsoft so that it can can pursue its own game-streaming ambitions. While the company's xCloud game-streaming platform will make use of a server-side distribution platform that's similar to what Google is doing with Stadia, it also has the opportunity to turn its new Xbox into a hub for streaming next-gen games to laptops, smartphones, and other mobile devices. Here's a quote from the Series X's announcement press-release touching on the upcoming platform's cloud functionality and ability to bridge games beyond the console: "Xbox Series X is also designed for a future in the cloud, with unique capabilities built into the hardware and software to make it as easy as possible to bring great games to both console and elsewhere. Xbox Series X will deliver a level of fidelity and immersion unlike anything that's been achieved in previous console generations."

The powerful hardware and added tech needed to provide advanced streaming functionality and backwards compatibility with previous Xbox consoles suggest the Series X will be relatively expensive. Based on what's known about the level of power in the box, some expect the system could debut at a price in the $500-$600 range. If that's the case, it wouldn't be surprising to see Microsoft make a bigger push to offer its console and supporting game subscription services on installment plans -- reminiscent of what's seen with high-end mobile devices like the iPhone.