Investors have to be happy with the way 2019 has gone. Some big gains for the Dow Jones Industrials and other stock market indexes were a welcome change after a rare down year in 2018, once again highlighting the need not to panic during tough times but rather than stay the course and keep following a consistent investing strategy.

Yet even though the overall market was up sharply in 2019, not all of the Dow's 30 constituent stocks kept up the pace. In particular, several Dow stocks posted declines for 2019. Here, we'll take a closer look at Walgreens Boots Alliance (NASDAQ:WBA), 3M (NYSE:MMM), and Pfizer (NYSE:PFE) to find out why they were at the bottom of the performance list among Dow stocks in 2019. 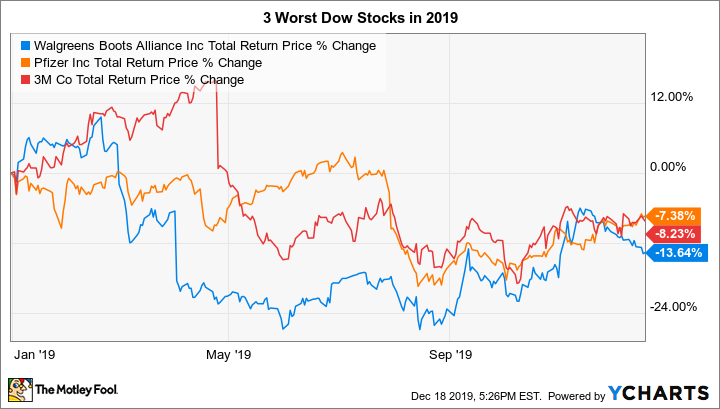 The healthcare industry has been under attack for several years now, with regulators and government officials in Washington looking for ways to cut costs for consumers. For years, pharmaceutical stocks like Pfizer had to deal with the threat of efforts to try to limit the prices they could charge patients. Yet more recently, regulators have turned their attention to the distribution channel for pharmaceuticals, and that put companies like Walgreens that combine drugstore retail chains and pharmacy benefit management in the crosshairs. 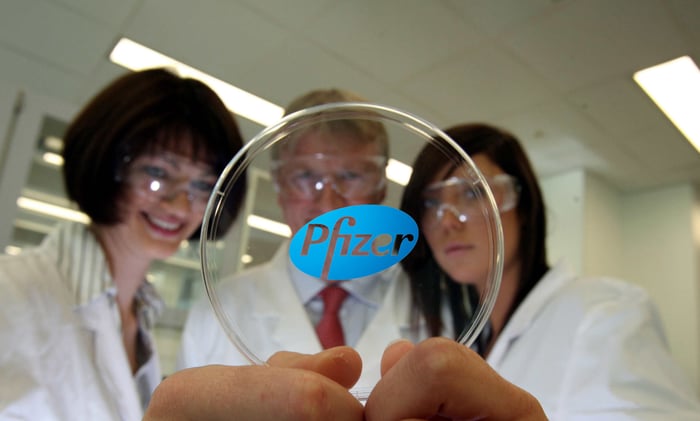 Walgreens started out the year on a down note, as earnings suffered because of the company's going through a business transformation initiative. The drugstore chain decided that it needed to spend large amounts of money to refresh its store concept, and it also incurred costs from closing underperforming drugstore locations. The goal from the moves was to cut costs to spur long-term profit growth, but the short-term pain has been hard for investors to deal with. Even speculation of a possible leveraged buyout wasn't enough to spur much of a recovery for Walgreens shares.

Meanwhile, for Pfizer, the story has been somewhat similar, but with a slightly more positive trend having gotten established late in the year. Pfizer struggled to deal with falling revenue and adjusted earnings during 2019, but the real story has been in Pfizer's strategic moves. Between entering into a joint venture on the consumer healthcare side and looking at its remaining biopharmaceutical business following a merger between Pfizer's Upjohn division and Mylan, what's left for Pfizer to focus on could well be the most promising parts of its business. That could put Pfizer in prime position for a rebound in 2020.

3M has long been an innovator, but 2019 wasn't the best of years for the conglomerate. Throughout the year, 3M had to reduce its guidance on revenue and profit, and it now expects to see organic sales drop for the year after having initially hoped for solid year-over-year gains.

A confluence of factors hit 3M this year, including a cyclical downturn for some of its businesses at the same time that the company faced longer-term challenges in its consumer and healthcare units. 3M is looking at trying to revamp its operations in an effort to make it less vulnerable to down cycles in key industries. For value investors, losses in 2019 make 3M more attractive, but the company still has to work hard to figure out exactly which direction is most likely to bring success.

The temptation is always to invest in losing stocks in hopes that they'll come roaring back and make up for lost time. Yet many of the challenges facing 3M, Pfizer, and Walgreens are still out there. That doesn't mean these Dow component stocks don't have good long-term prospects, but it does mean that you shouldn't count on an immediate turnaround for all three companies.