In the year since Designer Brands (NYSE:DBI) acquired brand designer and developer Camuto Group for $375 million, fears that the footwear retailer would trip up its comeback have been realized.

Although the owner of DSW and other footwear and apparel licenses expected Camuto would not be quickly assimilated into its operations, after yet another poor quarterly performance last week, it's clear the problems at the manufacturing and design house run deeper than previously believed, and it's going to take a lot longer to fix this business. 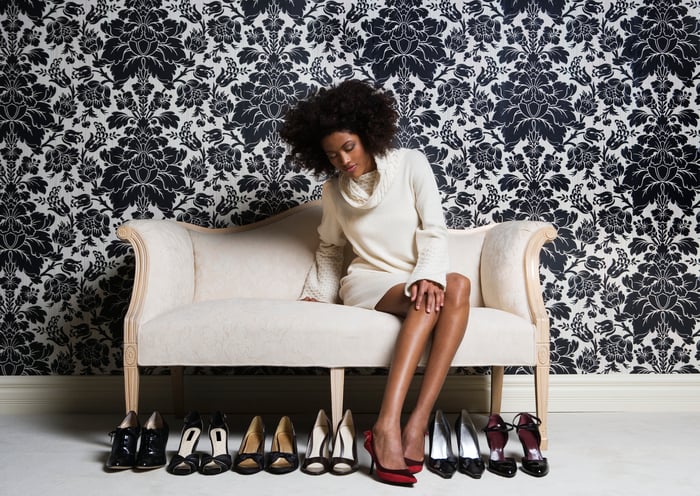 Opening the umbrella of the shoe salesman

The idea behind Designer Brands acquiring Camuto Group made sense in the abstract. The changing retail landscape that had seen DSW able to sell a mix of high-profile brands such as Nike and Under Armour was changing as the brands sought greater control over their merchandise and began selling their footwear more directly to consumers.

Designer Brands CEO Roger Rawlins said, "What got us here won't get us there," meaning it couldn't continue doing business as it had been if it expected to grow, so buying Camuto gave it the chance to shake its business up by becoming more vertically integrated.

It would have design, manufacture, and retail all under one roof, which would save Designer Brands money through cost synergies while expanding its capabilities into new markets and in new directions. With a properly functioning design house and manufacturing operation, that could have been possible, but Camuto Group wasn't that kind of business.

Camuto generated net sales of $131 million in the third quarter, down $3 million from last year and continuing the trend of it once again posting lower revenue than in the year-ago period. The decline was largely attributed to sales tumbling 21% at its Sole Society e-commerce site because Designer Brands cut back on marketing as trying to acquire new customers wasn't generating acceptable returns on the investment.

Wholesale sales were also down year over year, though just a small 1.4%, while the vincecamuto.com website saw sales increase to $4.5 million.

Designer Brands is also having to clean up the internal operational dysfunction at Camuto, which caused it to overbuy product that then needed to be sold off at a discount. As CFO Jared Poff put it, "They have not developed the muscles of strong inventory and sales planning that are required for someone being further down the supply chain," though the retailer introduced changes to the organization to bring it under control.

Even so, Designer Brands is expecting to take a hit of $0.10 in earnings per share in the fourth quarter as it now has to liquidate this inventory.

One area where Camuto was supposed to shine was on the tariff front because of its numerous factories outside of China. Although the trade war wasn't seen out the front window when it bought the design house, it thought it would be able to use Camuto to mitigate the entire tariff burden when it came into view.

That hasn't worked out either, but Camuto was still able to slough off 80% to 90% of the costs, so that's still extremely positive, just not the full benefit investors were promised.

Being a designer and manufacturer holds a lot of promise

The real hope for this business is in increasing private-label brands, which Designer Brands forecasts will be as much as $500 million worth in 2020. By increasing the penetration of Camuto-produced brands across all of its retail platforms, it's hoping for improved profitability.

But where Designer Brands initially believed gross margin would expand some 240 basis points by 2021, it now sees that figure growing by just 160 bp. Again, pretty good, just not the total promised.

Still, all of that hinges on getting Camuto's business functional again, which has been a challenge because it is continuously running into unplanned headwinds with the company. It's also why Designer Brands was forced to lower its full-year guidance for adjusted earnings per share to be in a range of $1.50 to $1.55 per share versus its prior outlook of $1.87 to $1.97 per share.

The turnaround is still a long way off

Management remains very bullish on the Camuto Group acquisition and its prospects going forward, though not with complete justification. If the benefits do accrue as projected and the synergies are eventually realized, it would turn into a smart decision to have made.

So far, though, the gains have been meager, if any, and the performance continues to drag down the whole. There's been no real proof yet, after a year, that this business can generate the kind of returns promised, which is why Designer Brands may yet regret its purchase.