Dividends, price, and growth are all key to these companies' attractiveness as retirement investments.

What do you look for when you're looking to buy a dividend stock to help pay for your retirement?

A big dividend, obviously. But perhaps you'd also like a stock selling for a nice price -- cheaper than the average stock costs, so there'll be a chance you are buying low so that you can later sell high? And how about a bit of growth, to help that stock go higher?

Maybe you'd even like to buy a stock that suits your new, retired lifestyle, so you can keep a close eye on how your investment is performing in the real world? Well, in that case, you're in luck. The following three stocks may just fit the bill: 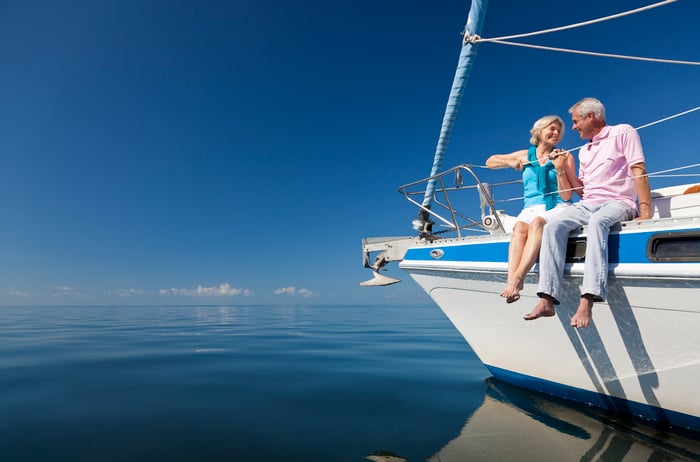 If you're retired now, or thinking about doing so soon, you're probably well past the "minivan" stage of life, and the midlife crisis sports car phase as well. It's time to settle down and buy a nice, reliable, highly rated sedan. According to U.S. News and World Report, one of the top "15 best cars for older drivers" in America is the Toyota Camry, nicely priced at $24,295 and boasting an unsurpassed "overall score" of 8.6 out of 10 possible points.

The Camry isn't just a car for old-timers, though. Car and Driver magazine notes that Toyota's Camry was the best-selling sedan, period, among American car buyers in 2018, and so far in 2019 it looks likely to retain that title. (Toyota also has the best-selling SUV, the RAV4.)

In short, Toyota is a very successful car company. But how does it stack up as a dividend stock?

Well, beginning with the most important attribute, Toyota pays its shareholders a generous 2.5% dividend yield. (That's about 25% more than the average stock on the S&P 500 pays, by the way.) Toyota's price-to-earnings ratio of 8.7 is just a small fraction of the 24 times earnings that the average S&P stock costs, too. And with a long-term expected earnings growth rate of 14.6%, Toyota shares are likely to grow earnings faster than most other stocks to boot.

As a first stock to consider when seeking dividend stocks, Toyota gets us off to a great start.

Traveling to see the kids, grandkids, and great-grandkids is a big part of retirement in America -- but what if your kids have moved too far away to comfortably drive? What if they've even moved to ... Hawaii? (Or what if you're in the mood to visit Hawaii even if the grandkids live somewhere else entirely?)

That will require an airline, and one that you might consider using is Delta. As America's biggest airline (stock) by market capitalization, Delta has made great strides in overcoming its reputation as a poor-performing "legacy" carrier. In fact, earlier this year, WalletHub.com ranked Delta as the No. 2 airline in America. It's also a pretty good prospect for investment as a dividend stock.

Sure, you could invest in No. 1-ranked Alaska Airlines instead. But Alaska only pays a market-average dividend rate -- 2%. Buy a few shares of Delta instead, and you can lock down a 2.7% dividend yield!

Another advantage Delta has over Alaska Airlines stock is its price. Delta stock sells for only 8.3 times trailing earnings today, barely half the cost of Alaska stock (14x earnings). Again, that's a huge discount to the average P/E on the S&P 500. Delta's also growing faster than the average stock, as it is pegged for 11.3% annualized earnings growth over the next five years. According to Morningstar data, the average S&P stock will grow less than 10%.

Yep, I think we can add Delta to our list of contenders, too.

Now ... traveling to visit and traveling for fun are all well and good. But what do you do if you want to let someone else do all the work of traveling for you -- while you just kick back and enjoy? In that case, it might be time to consider a cruise. That's why our third and final dividend stock to consider today is Royal Caribbean Cruises.

Easily one of America's best-known cruise lines, Royal Caribbean is also worth a look as a potential investment for retirement. Its 2.5% dividend outclasses the average on the S&P, and roughly matches the size of Toyota's dividend. Its P/E ratio of 13.9 is a bit more expensive than rival publicly traded cruise line Carnival, but is still a big discount over what the average S&P 500 stock will cost you.

Perhaps most importantly, whereas analysts who follow Carnival stock think the company will only grow earnings at about 5% annually over the next five years, Wall Street bankers think Royal Caribbean will easily "cruise" higher, growing at better than a 10% rate over the next half decade (and yes, again, faster than the average stock).

So dividends, price, and growth -- check, check, and check, this stock ticks all the boxes as well.