Earlier this month, Alphabet (NASDAQ:GOOG) (NASDAQ:GOOGL) appointed Sundar Pichai as CEO after co-founders Larry Page and Sergey Brin took a step back from the tech holding company's daily operations. Pichai had been named Google CEO as part of the company's restructuring into Alphabet -- a word play on "alpha," which refers to outperforming investments, and "bet," as Google has a penchant for risky experimentation. In connection with the promotion, Pichai has just scored a massive payday that is even greater than his last raise.

Here's how much the tech giant is giving its new CEO. 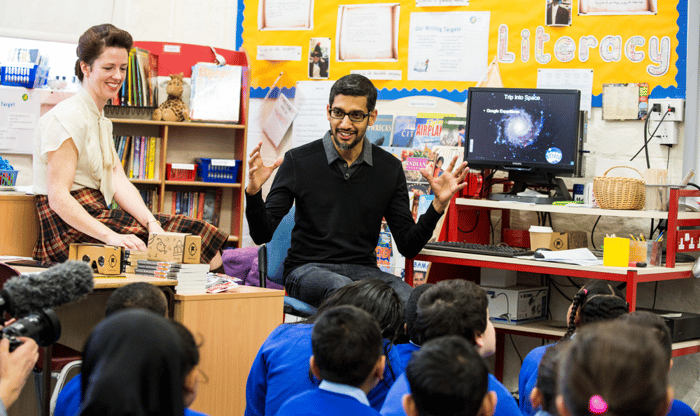 In a regulatory filing last week, Alphabet said that its board of directors had approved a compensation package for Pichai worth approximately $240 million, topping the previous record compensation that Pichai set when he was named Google CEO. The new package recognizes Pichai's additional responsibilities in overseeing Alphabet's "other bets" segment, the company's moonshot division that makes high-risk, high-reward investments in potentially transformative ideas that could easily be plucked out of science fiction.

Pichai will also receive $120 million in GSUs, which will vest based on timing instead of TSR. One-twelfth of that grant will vest every quarter starting on March 25, 2020. There's also yet another GSU grant, a "one-time transitional grant" of another $30 million that will start vesting on that same date, except in quarters so that it will take just one year for Pichai to pocket that part of the package.

That all adds up to $240 million, based on current share prices for Alphabet's Class C shares. But wait, there's more! Pichai will also see his base salary more than triple from $650,000 per year to $2 million per year. Like many tech founders, Page and Brin had long been drawing a token $1 annual salary for years.

Additionally, Pichai's PSU awards can potentially vest at 200% if TSR performance is strong enough, which could double the value of that equity to add another $90 million, bringing the total value up to $330 million. Alphabet does not disclose what threshold is required to hit 200% vesting.

For reference, here is Pichai's compensation over the past four years, with his award for becoming Google CEO spread across 2015 and 2016. "Other" compensation primarily consists of security costs, with a small portion allocated toward the use of private charter aircraft.