With major indexes recently hitting new highs thanks to strong U.S. jobs numbers and encouraging progress on trade disputes with China, investors are probably thinking about the best strategies heading into 2020.

More-conservative investors may prefer lower-risk, slow-growth companies that have been sidelined for much of the market's rally, because these stocks can maximize dividend yield and protect from potential downturns. There are still risk factors on the horizon that could lead to a weaker global economy and a slide for equities markets, and a more cautious approach makes sense if your goal is to prioritize yield and conserve wealth.

On the other hand, growth-focused investors or those taking a more balanced approach to building their income portfolios should also consider high quality dividend-growth stocks that look poised to continue generating strong returns and substantial payout hikes.

Wendy's (NASDAQ:WEN) and Lowe's (NYSE:LOW) are two dividend-growth stocks that trade near all time highs that investors should narrow in on. Read on to see why the fast-food restaurant and the big-box home improvement retailer are worth owning if you're seeking a combo of dividend growth and capital appreciation. 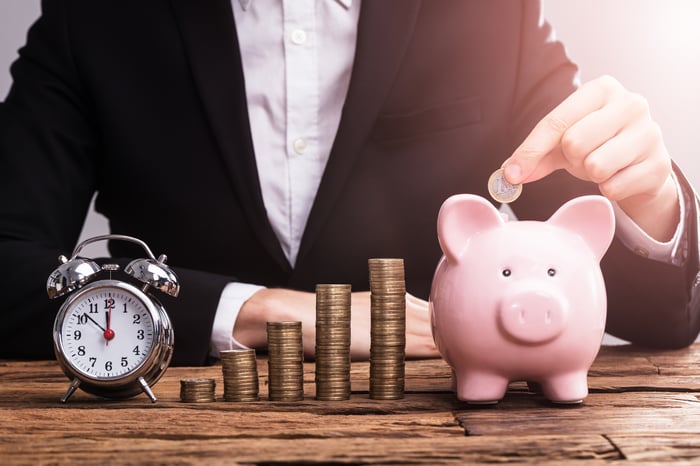 Lowe's has been viewed as a transformation story for a while now, and the superior revenue and margins posted by market leader Home Depot have led to unfavorable comparisons that have encouraged the idea that the smaller company won't be able to pull it off. Lowe's isn't going to surpass its main rival anytime soon, but it has been making some intriguing progress with its turnaround, and the stock's growth potential and fantastic dividend track record make it worth backing.

Lowe's has delivered annual payout growth for 56 years running, a stretch that few companies even come close to -- and fewer still can surpass. The retailer's incredible streak of payout growth has spanned numerous periods of recession and some significant ups and downs for the housing market.

Shares yield roughly 1.9% at current prices, and the company has boosted its payout by a whopping 139% over the last half-decade. Add in a payout ratio at a reasonable 77% of trailing free cash flow while the company is investing in its revamp, and it all suggests that there's room for more substantial increases.

The company delivered a significant third-quarter earnings beat in November, and raised its full-year targets thanks to solid same-store sales growth. Comps climbed 2.2% year over year in the quarter and 3% in the U.S. market. Adjusted earnings climbed a whopping 35.6% in the quarter, and the company has a clear path to continued growth as it increases comps, improves its online-retail business, and moves to make the overall business more efficient.

Increasing the efficiency of its Canadian operations is one aspect of the ongoing transformation. In less euphemistic terms, that means closing 34 underperforming stores in the country. Shuttering stores is rarely cause for optimism, but it's a move that has looked sensible for Lowe's in some regions for a while now. And building out support for online retail and services like in-store pickup should create long-term tailwinds.

Low interest rates are making it easier for people to buy homes, which should work to the home-improvement retailer's advantage. And even though the stock has recently been getting more credit from the market, many investors remain on the sidelines -- and it seems like Lowe's still hasn't gotten a vote of confidence that's in line with recovery for the housing market.

Wendy's stock yields roughly 2.2% at current prices, and the company has delivered annual payout growth for seven years running. The fast-food company has been raising its dividend at an impressive clip and still has a long runway for capital appreciation.

Wendy's has boosted its dividend by 118% over the last five years, and the company's growth initiatives could pave the way for more impressive expansion for its payout and earnings.

Investors are probably familiar with the fantastic catalyst that breakfast has been for McDonald's. Wendy's had tried to break into the breakfast market before, but McDonald's responded with steep discounting and a big advertising push that stymied its competitor's efforts. Morning service is an area where Wendy's has never managed to gain a foothold, but there's a good chance that will change in 2020.

It's making a big push into breakfast service next year, with a national rollout in the first quarter that will expand hours of operations at stores and be accompanied by a big marketing push. Research from Cowen projects that the breakfast initiative will help boost same-store sales by 5% in 2020, and management predicts that breakfast will quickly grow to contribute at least 10% of U.S. sales.

Dividend growth could slow in the near term amid the big expansion pushes, but the long-term opportunity remains appealing. Wendy's is still opening stores, expanding its count by 111 across the first nine months of the year and adding 40 new stores in the third quarter alone. And the company is undertaking a significant international expansion.

CEO Todd Penegor said in the company's most recent earnings report that the growth projects will allow the company to boost its international store count and roughly double its revenue to $2 billion by 2024. Factor in potential long-term tailwinds like increased automation, and Wendy's looks like a dividend-growth stock with room to run.