Nike (NYSE:NKE) reported second-quarter earnings after the market closed on Thursday that were significantly ahead of analysts' targets. The shoes and apparel retailer reported earnings per diluted share of $0.70 on sales of $10.3 billion, handily topping the average analyst estimate's call for per-share earnings of $0.58 on revenue of $10.1 billion.

Nike stock slipped roughly 1% on the day of trading following the earnings release but was at an all-time high prior to publishing the report. It had climbed roughly 36% year to date.

Overall, it was a very strong quarter for the company and saw the business make substantial top- and bottom-line gains and significant progress on long-term strategic initiatives. Read on for a closer look at the second quarter results, as well as some supporting quotes from Nike's conference call. 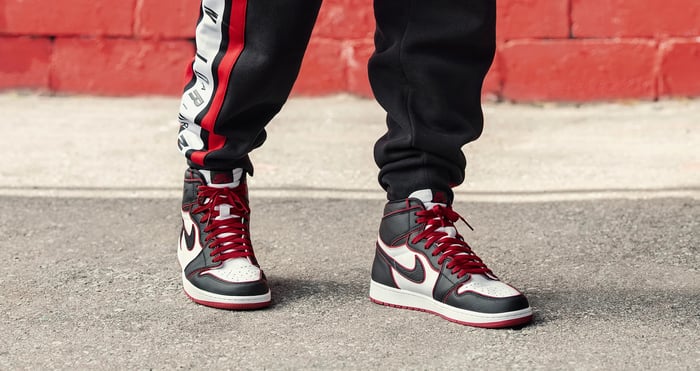 Even though the company's stock dipped slightly after earnings, it was a great quarter for Nike. Its gross margin rose 20 basis points to hit 44%, despite the impact of the U.S.-China trade tariffs. Gross margin fell slightly short of the average gross margin target of 44.1%, but shareholders still had plenty to celebrate.

The Swoosh's diluted earnings per share climbed 35% year over year, the Jordan brand recorded its first-ever quarter in which revenue surpassed $1 billion, and the company posted growth across each of its core geographic segments. The North American market's sales grew roughly 5% year over year, coming in at $3.98 billion, which was solid enough. But the real standout was strong growth in international markets.

CEO Mark Parker touched on some of the highlights in the quarter and the role that international sales played in driving performance:

Overall, revenue for the quarter grew 10%, up 13% on a currency neutral basis. [...] The consumer is voting for our brands across the whole portfolio and up and down price points. The passion for sport and active lifestyles is thriving around the world. Our international business grew 18% led by Greater China at 23% and we continue to grow NIKE's digital advantage in the marketplace.

CFO Andrew Campion stated that the company saw strong double-digit growth in every key category and dimension of the Chinese market. Digital momentum was particularly strong, with sales growing 44% year over year on a currency-neutral basis. The company saw record-setting performance on the country's Singles' Day shopping holiday.

2. Digital continues to be a big part of Nike's innovation efforts

"Nike is a growth company" has been one of the most repeated mantras from the business' Beaverton, Oregon headquarters in recent years. For most companies, delivering growth in the 21st century is going to hinge on smart uses of technology -- whether that be through automation, data analysis to better serve the target markets, or a range of other initiatives.

Strong digital performance was a big factor in the company's impressive second-quarter results. Here's Campion on the value Nike sees in building an engaged digital ecosystem and the progress it's making on that front:

In Q2 more than half of our total digital traffic came from logged in members. A Nike member is a consumer who has chosen to create a profile with Nike. Even in just these early stages of digital transformation at Nike, the average order value for members is significantly greater than for non-members. And we're seeing revenue growth from members continue to expand based on two factors -- one, strong rates of growth in new members and two, greater member engagement year over year as measured by monthly active users. As we consider investments in transforming how we operate, we always look to our consumer first, and more specifically -- our members, and assess where we have the greatest potential to improve their experience.

Direct-to-consumer sales grew 17% year over year in the quarter, with digital's 38% sales expansion powering the growth, aided by engagement for the Nike and SNKR apps. North American e-commerce sales climbed more than 70% across Black Friday weekend, and digital momentum is evident in international markets, as well.

The company wound up as the No. 1 athletic brand on Alibaba's Tmall e-commerce platform for Singles' Day and launched the Nike app in China in the quarter. Digital sales in the APLA geographic segment grew 67% in the quarter.

Total SNKR app membership grew at a strong double-digit percentage according to Mark Parker, and Nike app membership more than doubled. There's clear evidence that the company's e-commerce and digital-engagement push is paying off.

3. Nike is in a strong position moving forward

The Swoosh company didn't give precise sales guidance but shared how it sees revenue growth shaping up for the third quarter and full year. CFO Andrew Campion laid out expectations for third-quarter revenues to be up "in the high single-digit range, albeit, at the very low end of that range."

Campion also said that third-quarter sales growth will be in line with what the company delivered in terms of reported revenue in Q1 -- which was sales growth of 7%. Nike expects that third-quarter margin will continue to expand. Much of that expansion, however, will be offset from the impact of tariffs, and the company sees solid growth continuing in the second half of the year. Here's the CFO outlining the company's full-year outlook in the earnings call:

On a currency neutral basis, our outlook for the full year continues to improve. For the full year, we now expect currency neutral revenue growth approaching the low double-digit range -- even after taking into account the non-comp impact from the sale of Hurley. With continued geopolitical volatility, we expect foreign exchange to remain a 2 point to 3 point headwind on reported revenue growth. Taking into account all of these factors, we continue to expect high single-digit reported revenue growth for the full year. We also continue to expect gross margin expansion within the 50 basis point to 70 basis point range. And SG&A [selling, general, and administrative expenses] growing in the high single-digit range even including the impact of acquisitions. We expect our effective tax rate to be in the low to mid teens.

Full-year revenue in the low double-digit range is expected despite the negative impact of selling off its Hurley brand. The business' long-term growth opportunities look promising, thanks to trends like growth for digital engagement and expansion in international markets.

Nike CEO Mark Parker is set to step down from his post on Jan. 13 and hand the reigns over to former ServiceNow CEO John Donahoe. Parker will become the executive chairman of Nike's board of directors at the end of his 13-year chief executive tenure. He's put the company in a strong position as he steps into this new role.