It wouldn't be accurate to say social networking giant Facebook (NASDAQ:FB) is the only game in town when it comes to advertising on the web. There's always Alphabet's Google, and though they reach a smaller crowd, Twitter and Snap property Snapchat are decent alternatives in their own way. When it comes to outright reach, engagement, and total click-throughs, however, Facebook is still the go-to choice for most advertisers.

That may not be the case for much longer, though.

While it's arguably earned every penny of the price increases it's been able to impose on advertisers, Facebook could be close to pricing itself right out of the market. That could, in turn, create an alarming headwind for the company's revenue growth.

The grumbling first started to take a discernible shape early last year, after a major "tweak" to its News Feed in January more than doubled March's cost per 1,000 ad impressions on a year-over-year basis. 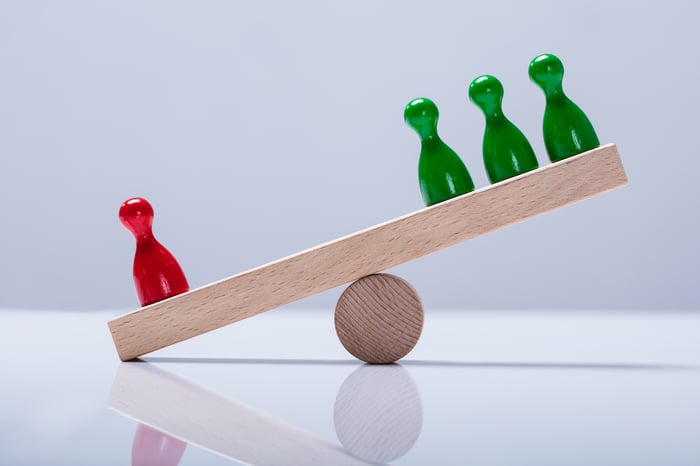 The change didn't inherently make advertising on Facebook any less cost-effective. By and large, advertisers ended up competing less with other advertisers. On the other hand, the balance between costs and the return on that investment may slowly be slipping away for the social media company's customers. Although it's cooled a little since then, more recent figures from advertising market research outfit LiveIntent suggest that per-impression advertising rates for Facebook are up on the order of 90% year over year.

Facebook would argue it's worth it, as the company offers advertisers a stunning amount of useful information about its users that presumably inspires more clicks and conversions (meaning advertisers are still getting a lot of bang for their buck). In November, Facebook unveiled a means of determining not just what sort of offer its users may respond to, but also what ad format a particular user is more likely to click. Earlier this month, reports came out that Facebook knows (through partnerships with some retailers) about purchases you've made in a brick-and-mortar store, and then feeds you ads related to those purchases. It's a level of personal detail that was, at one point, unthinkable.

It may not matter, however, if advertisers can't make full use of the more potent, detailed data. The LiveIntent survey indicates that 85% of advertisers are concerned about higher costs. The same study suggests 47% of advertisers fear that they might have to stop using Facebook as an ad venue if their costs continue to rise.

To be clear, this paradigm shift doesn't pose an existential threat to Facebook. But it does pose a threat to investors that have grown accustomed to strong fiscal progress and priced the stock as such.

And it's not just the increasingly higher costs of Facebook's ads that could prove problematic. Ad prices may be peaking at a point in time when user growth is as well. As of the end of the third quarter, Facebook served 2.45 billion monthly users. The figure was up 8% year over year, but with roughly one-third of the world's population now using the company's apps, it's conceivable that user growth rates could be negligible in the foreseeable future. That puts the onus on advertising prices to drive revenue growth.

In the meantime, note that the amount of time the average user spends on Facebook per day continues to shrink. According to data and a forecast from eMarketer, Facebook users will peruse the social networking site a total of 38 minutes per day this year, matching last year's number, but well under 2017's peak of 41 minutes. Next year, the figure is expected to slip to 37 minutes. The less time users spend on Facebook, the less likely they are to click on an ad. And, should the privacy-driven movement working against all web companies right now continue to gain traction, the power of Facebook's detailed data about its users could be negated.

Something's got to give, eventually

While the risk is there, there's no convincing evidence yet that it's taking a toll. Last quarter's average revenue per user on a global basis improved -- again -- from $6.09 to $7.26. In the all-important North American market, it grew from $27.61 to $34.55 on a year-over-year basis. Even if user growth comes to a screeching halt, Facebook is still successfully extracting more and more money from advertiser interest in existing users.

Look at the broad picture, though. The landscape is changing. Advertisers aren't just complaining or making idle threats about the soaring costs of running ads on Facebook (or any technology company that sells ad space, for that matter). Interactive Advertising Bureau recently noted that direct-to-consumer (DTC) companies no longer choose social networking as their first choice for advertising. It's still a close second, but search engines are back in first place. And even then, the whole arena is fragile. As DTC strategist Marco Marandiz recently commented on the matter, "Ads on Facebook, Instagram and Google are getting way too expensive to be sustainable."

Somehow, something's got to give sooner or later.