It's not exactly a secret that networking name Cisco (NASDAQ:CSCO) is only a shadow of its former self. The company was on top of the world and growing like a weed back in the 90s, when the internet was young. Now it's struggling to drive single-digit growth. The world's technology needs evolved, as did the company's competitors.

It's a bit too soon to label Cisco a has-been and deem it beyond redemption, though. Admittedly, it moved slowly in preparing for the next era of networking. It's ready for the future, though, with three powerful tools at its disposal.

Since its inception, Cisco was known for making top-notch switches and routers built around other manufacturers' chips. That's changed, though. After five years in the making, the company recently introduced its first custom-built networking chip. It's called Silicon One. The processor can power both switches and routers, and work in fixed as well as modular networks. Limiting a network to one kind of processor means deployment costs (as well as headaches) fall.

Silicon One will also launch just in time to power the 5G networks that are just starting to roll out, already capable of 10.8 terabit (per second) speeds that will help 5G's promise be fully realized. The company's got plans to more than double that speed in the future. In the meantime, Facebook and Microsoft are already using the tech to power their networks.

With nothing more than a quick glance, Cisco's purchase of Exablaze might look like just another acquisition, doing something with its otherwise idle $28 billion worth of cash or nearly cash assets. Exablaze brings a unique technology to the mix, however, that could make Cisco's wares even more marketable.

Exablaze makes low-latency equipment designed to provide the blazing fast speed high-frequency traders need to maintain their edge. Cisco has a certain interest in the financial services business, but what it really wants is the underlying tech. Low-latency (less data delivery delay within the hardware itself) is proving to be critically important for artificial intelligence work, though it also could play a key role in helping to supply the kind of data speeds 5G connections will need.

3. White box with a twist

The newest fad within the world of networking is the advent of so-called "white box" hardware. Rather than limiting a product line to a fully branded switch or router complete with the underlying software and support to power and maintain out, white box solutions are basic, no-frills hardware that data centers and network operators can purchase at a lower cost, and custom-build themselves from (almost) scratch.

Cisco has mostly resisted the movement, opting to sell entire systems more so than mere pieces. That's changing, though. As part of the company's recent revamp, CEO Chuck Robbins explained that Cisco's "new model is highly adaptable and offers customers choice of components, white box, or integrated systems to build their networks. This approach matches the evolving nature of operators selecting discrete or aggregated technology elements for their buildout and creates new economics of the Internet to provide significant business value."

To what extent Cisco will offer different components and levels of solutions is still mostly unknown, but know that while Cisco has already been putting other manufacturers' chips in its routers, it's now going to sell Silicon One chips to other technology companies to put in their hardware.

What sort of fiscal growth these initiatives may inspire still isn't perfectly clear. Analysts don't yet seem to think much of the strategic shift and developments, but analysts -- like many investors -- have watched the company perform lethargically for years now. 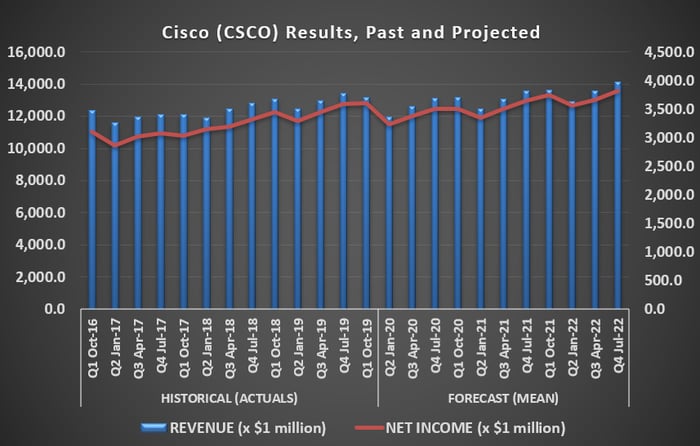 The creation of Silicon One was a five-year project, though, and the tech serves as the underpinnings of networking solutions that could remain relevant for years longer than the life many network and data center operators are currently getting out of their hardware. As Cisco SVP Jonathan Davidson explained at a tech and telecom conference earlier this month, "we've got sustainable differentiation for several silicon generations to come." In the meantime, merely having a Silicon One processor in place inside someone else's box makes it at least a little easier to add Cisco-branded hardware to that system in the future.

Put it all together, and you've got a potential turnaround story not too many people see coming.