Florida, like many states, has a commercial that pushes buying lottery tickets as holiday gifts. The ad actually calls scratch-off tickets "the must-get gifts of the season," saying that "pretty much everyone is going to want them."

That may be true -- people probably do want them -- but that doesn't stop them from being a terrible gift. Giving someone a lottery ticket is similar to buying them a carton of cigarettes: It may be what they want, but your present is supporting a bad habit.

Lottery tickets -- whether they're "scratchers" or multistate games like Mega Millions or Powerball -- sell a pipe dream. You spend a dollar, or maybe up to $20, for an instant ticket, and you might win millions. The problem, of course, that the odds are overwhelmingly stacked against you, so playing really amounts to throwing your money away. In fact, the odds of hitting the jackpot are approximately one to 300 million. You'd be better off gifting your loved ones a sure thing, like a gift card with real value or actual cash they can use how they like. 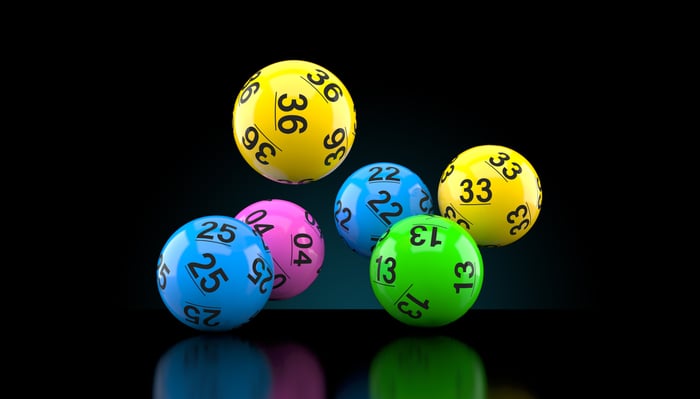 Your odds of winning the lottery are astoundingly bad. Image source: Getty Images.

But somebody has to win...

There's no exact formula, but lotteries generally pay back 50% to 60% of the total money bet as prizes. That may sound like a lot, but it's actually well below the 86% minimum payback that Nevada mandates for slot machines and video poker. In fact, most Las Vegas casinos set their machines for closer to 90% payback, with some forms of video poker paying out close to 99%, according to LiveAbout.com.

Slot machine payback works a bit like the lottery in one way: The big payouts account for much of the money paid back. Yes, someone will win that prize, but the odds of it being you are tiny. Yes, you might hit a smaller jackpot on a slot machine (the kind that keeps you playing), or you may win a few bucks on a lottery ticket or scratch-off card (which you might then spend on more tickets or cards), but you're astoundingly unlikely to take home the big prize.

A website for the Iowa lottery spelled out how bad the odds are of winning the big prize in Powerball or Mega Millions:

Games with lower top prizes come with better odds, but a one in 10 million chance to win $1 million is still an irresponsible way to spend your money. Buying someone a lottery ticket as a holiday gift does them a disservice. It's a choice that may seem innocent but isn't.

So many better ways to spend your money

Americans waste a lot of money on the lottery. In fact, the average American spent $219.54 on lottery tickets in 2017, according to an analysis of U.S. Census data. That's money thrown away that could have been invested. It may seem like a small amount, but if you invest that money, over time, you'll have a massive return.

If, for example, you take $200 each year for 30 years and invest it in the stock market, assuming an annual return of 9% (the low end of the historical average), you'll have nearly $30,000. To put that another way, you invested $6,000 and will end up with five times that amount.

People may think that they need the lottery to become millionaires. The reality is that all they need is time...and to make better choices about how they spend their money.