Please ensure Javascript is enabled for purposes of website accessibility
Log In Help Join The Motley Fool
Free Article Join Over 1 Million Premium Members And Get More In-Depth Stock Guidance and Research
By Aditya Raghunath - Dec 24, 2019 at 9:24AM

If you want to invest in growth stocks, companies in the digital payments industry seem like a solid bet. Yes, this space is heating up due to the rise in competition, but there are companies that have a loyal customer base generating sustainable revenue growth.

What clues do you need to identify a winning player in the high-growth and highly competitive digital payments sector? Let's take a closer look by analyzing one such company that should successfully increase its long-term shareholders' wealth.

PayPal (PYPL 5.31%) enables digital and mobile payments on behalf of enterprises and individuals around the world. Its brand portfolio includes PayPal, PayPal Credit, Braintree, and Venmo.

The company generates a majority of sales through online transactions. In the third quarter of 2019, the company's total payment volume (TPV) rose 27% year over year to $179 billion, resulting in a 19% growth in sales that reached $4.38 billion. PayPal split from eBay back in 2014 but still maintains a partnership, although TPV from the latter declined 3% in Q3. eBay now accounts for just 8% of PayPal's TPV. 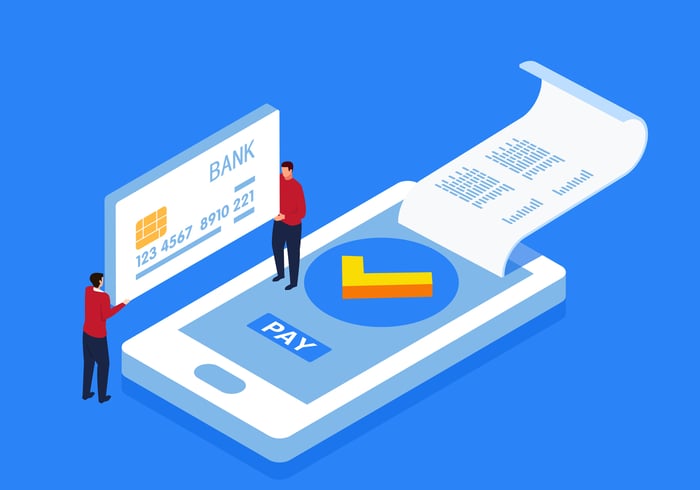 PayPal continues to expand its customer base at a robust rate. In the third quarter, it added 9.8 million net new actives, increasing the total number of active accounts on its platform to 295 million, a growth rate of 16%. It expects this number to touch 304 million by the end of 2019.

Another key driver of transaction volume is its engagement metrics, which rose 9% to 40 transactions per active account. During the earnings call, PayPal CEO Dan Schulman stated, "Mobile is a major driver of our growth with One Touch at 172 million consumers and 13.8 million merchants. We are quite focused on growing our value proposition beyond checkout as our consumers look for more reasons to use PayPal as part of their everyday financial life."

PayPal has also focused on inorganic growth via acquisitions. In 2012, Braintree acquired Venmo for $26.2 million, while PayPal acquired Braintree for $800 million in 2013. Venmo is a peer-to-peer payments application and ended 2018 with an annual run rate of $200 million.

In 2019, Venmo continues to gain traction among customers. In the third quarter, it processed around $27 billion in volume, up 64% year over year. This indicates a daily payment volume of $300 million.

In the 12 months prior to September 2019, the total transaction volume for Venmo was over $100 billion with an annual run rate of just below $400 million.

In 2018, PayPal acquired Hyperwallet for $400 million to strengthen its payout capabilities . PayPal can now provide an integrated suite of payment solutions to marketplaces and e-commerce platforms around the world.

PepsiCo launched its first-ever cashback loyalty program (via Hyperwallet), while Lime, which is a scooter rental platform, has partnered with PayPal to facilitate payouts to its networks of freelancers. Fortnite maker Epic Games also uses PayPal to expedite its prize payout process.

Last month, PayPal announced the acquisition of Honey Science Corp., a shopping and rewards platform, for $4 billion. Honey has over 30,000 online retailers on its platform and has helped customers save around $1 billion in the last year.

In September 2019, PayPal announced its plans to acquire a 70% stake in China's Guofubao Information Technology, which holds a payments license business in that country. PayPal will be the first foreign company to be authorized to provide online payment services in China.

Focus on credit services and partnerships

PayPal's credit business is another strong driver of engagement on its platform. In the third quarter, it launched new customer installment plans in the U.S. and Germany. These plans allow PayPal customers to pay for purchases on a monthly payment plan. This capability has already resulted in incremental sales for PayPal merchants, according to the company.

PayPal continues to expand via partnerships. It signed a long-term strategic deal with Citi Australia to develop consumer credit products for PayPal customers in the country.

PayPal also experienced strong adoption among global merchants in the daily spend categories. PayPal launched the PayPal Checkout in partnership with Walmart to be the sole payment solution for the latter's online grocery business in Mexico.

PayPal has also partnered with the Japanese government to promote cashless payments in the country.

The mobile payments industry is estimated to reach $3.7 trillion by 2024, up from $897.7 billion in 2018, according to Orbis Research. This indicates an annual growth rate of 27%, allowing multiple players to be part of this growth.

The global payment growth will be driven by countries in the Asia Pacific region including India, China, Australia, and Japan, according to the report.

It is no wonder that PayPal will be able to increase sales by 14.9% to $17.74 billion in 2019, according to Wall Street estimates. Analysts expect company sales to reach $24.3 billion by 2021. The solid top-line growth will also help PayPal grow earnings by an annual rate of 18.2% in the next five years.

However, the expanding addressable market coupled with PayPal's focus on acquisitions and partnerships make it a strong long-term bet for investors.