Biotechnology has proved to be one of the most fruitful areas when it comes to stocks that quickly double or even triple in value seemingly overnight. The main reason is that the stock market simply cannot predict the success (or failure) of clinical trials with any degree of accuracy whatsoever.

Similarly, Wall Street was caught flat-footed when Aurinia Pharmaceuticals' lupus nephritis candidate voclosporin hit the mark in a pivotal trial earlier this month. The point is that valuations in biotech are constantly in flux due to the unpredictability inherent in many of these businesses. 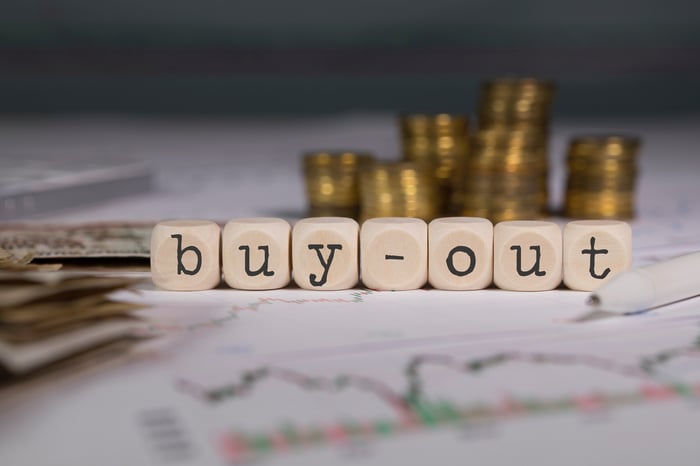 Keeping with this theme, business development activity adds yet another element of surprise to the valuation process in biotech. Several companies that most analysts thought would be acquired early in their life cycle have repeatedly failed to attract viable tender offers over the years. Whereas complete dark horses like the synthetic-protein maker Synthorx have gone on to fetch enormous offers from big pharma seemingly out of the blue.

Next year, though, promises to be far more predictable on the merger and acquisition front. Numerous big pharmas and blue chip biotechs are facing key patent expirations in the next decade. Moreover, all of these companies are experiencing tremendous pressure from U.S. politicians to lower the prices of their brand name medications. These dual headwinds, in turn, should drive an uptick in demand for bolt-on acquisitions that can generate healthy levels of revenue through large sales volume, instead of through ginormous price tags.

Which biotechs have the goods to meet this demand? Acadia Pharmaceuticals (NASDAQ:ACAD) and Axsome Therapeutics (NASDAQ:AXSM) both check this all-important box. Big pharma, in kind, may be willing to pay top dollar to acquire both of these names in the new year. Read on to find out more about these two red-hot buyout candidates.

The case for Acadia

Acadia's shares have nearly quadrupled in value in 2019. The drugmaker's stock has been on fire this year due to Nuplazid's positive top-line data readout as a potential treatment for dementia-related psychosis (DRP).

Nuplazid is already approved for Parkinson's disease psychosis (PDP), but a label expansion for DRP would be an absolute game changer. DRP, after all, is a far more common condition that PDP. Wall Street, in fact, thinks Nuplazid's sales could hit nearly $2 billion with this second indication in hand. That's quite a potential haul for a company presently valued at less than $7 billion.

What's next? Acadia plans on discussing a possible label expansion for Nuplazid with the Food and Drug Administration next year. While the agency may encourage a regulatory filing, there is also the very real possibility that it will require a confirmatory trial. So investors will definitely want to keep a close eye on this developing story.

Which big pharma or blue chip biotech might come calling in 2020? The obvious suitor is Biogen. Its multiple sclerosis franchise has been stuck in neutral for a while and the biotech doesn't have the greatest pipeline, to put it mildly.

The case for Axsome

Axsome's shares have already appreciated by a staggering 3,400% since the start of the year, but this mid-cap biotech still has a lot more room to run. The lowdown is that Axsome's stock has taken flight in 2019 on the heels of strong late-stage data for its major depressive disorder (MDD) medication AXS-05. What's more, two rival MDD medications flopped in the clinic this year, which opened the door for AXS-05 to grab an outsize portion of this enormous market.

That's a big deal because AXS-05 would likely need to grab only about 4% of the MDD market to reach blockbuster status (assuming a typical pricing point for an antidepressant). So a more typical penetration rate -- one that's easily achievable now with two big competitors down for the count -- would have the drug's peak sales coming in closer to $5 billion.

That's an absolutely monstrous commercial opportunity for a company with a $3.4 billion market cap. The truly crazy part about this story, though, is that Axsome's other pipeline activities could tack on several billion in additional sales if things go according to plan.

Which big pharma might take a stab at acquiring Axsome? The clear front-runner is Eli Lilly (NYSE:LLY) due to its deep interests in antidepressants. Even if Lilly doesn't make a play, however, Axsome should still have plenty of interest from a variety of suitors in 2020.