In this last full stock trading week of 2019, let's tip our collective hat to the markets. It was quite a year for equities, with major indexes rising to fresh all-time highs on a frequent basis and some of our favorite top stocks reaching the same milestone.

That said, we're seeing a few late-in-the-game stumbles from certain companies listed on the various exchanges. Here's a pair that were nursing a Santa hangover on the day after Christmas. 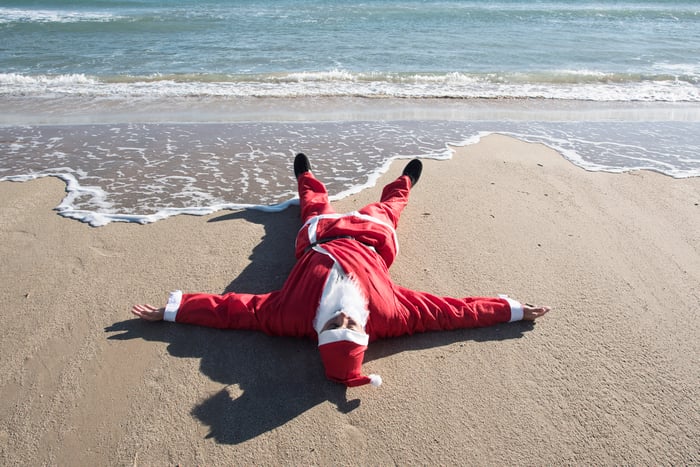 Shares of Qiagen (NYSE:QGEN) were eviscerated by almost 21% on Boxing Day, following news that a hoped-for takeover is not going to happen.

The Germany-based company announced the day before Christmas that it has opted to go it alone rather than sell itself to an outside entity. This isn't the gift many investors were hoping for from the genetic testing specialist -- in November it temptingly announced that it had been the target of "several conditional, non-binding indications of interest for a full acquisition." The stock promptly took off like a rocket.

So Thursday's fall to Earth is not surprising. It also brings back concerns investors had before the takeover speculation. After all, Qiagen's latest reported quarter indicated some bumps in the road, with a second consecutive reduction of full fiscal year sales guidance (blamed on difficulties in the Chinese market) and concerns about leadership following the departure of longtime CEO Peer Schatz.

Although the company recently signed up for a potentially promising, long-term collaboration with Illumina in next-generation sequencing diagnostics, we have no pertinent details on the arrangement. Given that, plus uncertainties over Qiagen's other business areas and the pesky matter of the CEO job, it might be best to leave the stock alone just now.

Planet Earth wasn't the only home of downer stocks on Thursday. Far up in space, Virgin Galactic Holdings (NYSE:SPCE) saw a downward trajectory of more than 4% across the day.

It's very possible that a deal announced on Thursday by SpaceX, Virgin Galactic's rival in otherworldly exploration, was the culprit. Privately held SpaceX won a contract from NASA to supply parts for exploratory vehicles.

This isn't a planet-sized deal, as it only totals about $7.5 million. Besides, although Virgin Galactic's ambitions overlap those of SpaceX, the former company is not a maker of components. However, the deal does indicate that there is revenue to be made in the private space sector, and Virgin Galactic still isn't making much (or any, if you don't count deposits for potential space flights by well-to-do tourists).

Somewhat surprisingly, for a company that could be a poster boy for speculative early-stage investments, Virgin Galactic has quite a few admirers in the investment community. Earlier this month, it racked up its third buy recommendation from a noted investment bank (Morgan Stanley, to be exact), which feels it has a lot of upside if it can manage to become the first viable space tourism operator.

That's an awfully long stretch to wait, though, given the monster costs and unproven model of this particular business. I think Virgin Galactic will be a fun stock to watch, but I personally am not about to invest in it.