After announcing a sales decline of 2% during its most recent earnings call, Molson Coors (NYSE:TAP) made a surprise announcement: It is changing its name from Molson Coors Brewing Co. to Molson Coors Beverage Co. This may seem like a minor change at first glance, but the underlying reason may say a lot about the future of the alcoholic beverage industry, specifically for the struggling U.S. segments of Molson Coors and its beer giant peer Anheuser Busch InBev NV (NYSE:BUD).

State of the beer market

Earlier this year, the Beer Institute reported that beer's share of total alcohol servings fell to 49%, down by about 1% in 2018 -- right in line with AB InBev's U.S. revenue, which declined by 0.7% in the same year. Craft breweries, which according to the Brewers Association now encompass over 24% of the overall U.S. beer market, grew their volume by 4% and helped keep beer sales from sliding further. However, both AB InBev and Molson Coors are facing significant pressure in their traditional domestic beer revenue, with Q3 earnings highlighting the trend. 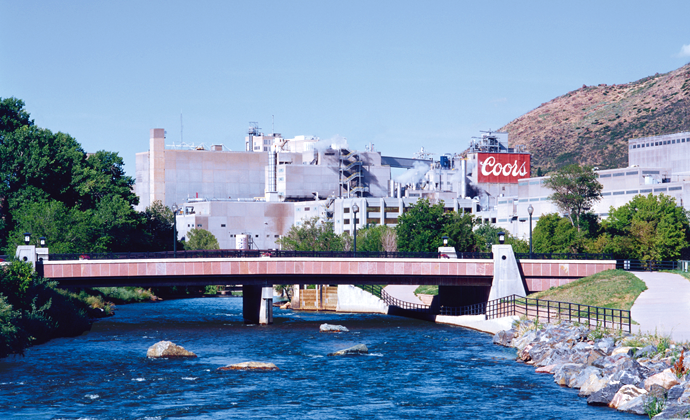 A wave of spiked seltzers comes crashing in

Unlike its two large domestic brewing rivals, Boston Beer, the second-largest craft brewery in the country and maker of Samuel Adams and Angry Orchard, saw a year-over-year revenue increase of 23.3% in the third quarter (even with sales of Sam Adams actually decreasing). The difference? Boston Beer's Truly has been the second-best-selling spiked seltzer on the market. The brand just announced a new partnership with the National Hockey League, and even with new entrants into the space, Boston Beer is expecting to build on its "triple-digit volume growth," as CEO Dave Burwick mentioned in the earnings release, while it tries to maintain its position in the market.

White Claw was just ranked the second-fastest-growing brand in 2019 by global research company Morning Consult and "accelerated faster than anyone could have predicted," White Claw's senior vice president of marketing told CNN Business back in September. According to another year-long Nielsen study completed in April, hard seltzers had already seen sales growth of 193% over the previous year, and that was even before "White Claw Summer."

How are the beverage companies responding?

In its Q3 earnings release, Molson Coors discussed its plans to expand its model for "bringing new beverages to the market faster and with more precision." Investors are getting a glimpse of this process with new products such as La Colombe hard coffee, released in September in the U.S., and Vizzy hard seltzer, to be released in 2020 in the U.S. However, Molson Coors does already have a struggling hard seltzer line, with Henry's Hard Soda holding just 2% of the market share as of mid-August, far behind White Claw and Truly.

AB InBev already has a portfolio of spiked seltzer brands, including its premium brand, Bon & Viv, and the lower-cost Natty Light Seltzer. As mentioned in its Q3 earnings report, both were "among the top 15 share gainers of innovations in the malt beverage category in 2019, according to IRI." AB InBev also announced the upcoming launch of Bud Light Seltzer to continue its efforts to carve out market share from its spiked seltzer competitors. In addition, AB InBev continues to launch non-alcoholic beers such as Budweiser Prohibition in international markets, signaling a shift away from its traditional beer brand and more toward being a beverage conglomerate.

With the large investments that Molson Coors and AB InBev are putting into the flavored malt beverages (FMB) market, it remains to be seen how effective their new product lines will be and just how much growth they can see from them. Given the companies' declining sales and a shift in consumer preferences, investors will need to show significant levels of confidence in the leaders of the two mega-brewers in order to get their stock prices moving in the right direction again.