Delta Airlines (NYSE:DAL) has come a long way from starting as a crop-dusting company in 1924. Deciding to purchase larger planes in 1928 and obtain routes for the United States Postal Service led Delta on a successful path until the September 11th terrorist attacks, high jet fuel prices, and increased competition from low-cost competitors pushed Delta into bankruptcy in 2005. Shortly afterward, shares of Delta became public during the launch of the IPO on May 1, 2007, at $20 per share.

Purchasing shares of a company on the first day of trading can provide additional risk and volatility, however, the risk was worth the reward for Delta shareholders holding shares for over 12 years.

How much money you would have from investing in Delta Airlines? 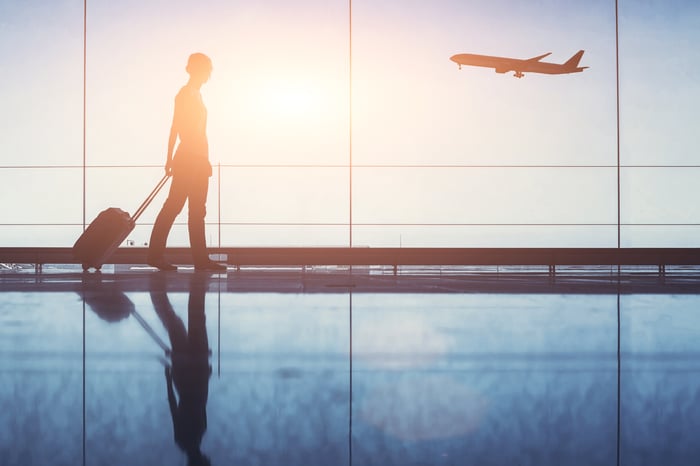 Two high-flying opportunities are on Delta's doorstep, consisting of a new partnership with a South American airline and the recent $4 billion investment in a terminal at LaGuardia Airport in New York.

Delta recently joined forces with LATAM Airlines in September -- an airline based in Latin America serving North and South America. Subject to approval, Delta will invest $1.9 billion in common shares of LATAM and an additional $350 million to support the partnership. Announcing that the partnership will show benefits to earnings per share during the "next two years and that the transaction will not impact existing financial commitments to shareholders" should make shareholders optimistic.

This partnership will allow Delta to provide routes to South America that wouldn't have been possible without the LATAM partnership -- allowing Delta to expand and develop a competitive position. Assuming the regulatory approval is smooth, Delta should see revenue performance in the next two years. Delta's management estimates an additional $1 billion annually from the partnership.

In addition, Delta has invested $3.4 billion in a terminal at New York's LaGuardia Airport, consisting of 37 gates. This investment provides several benefits for the airline, including reduced waiting times and the ability to serve a multitude of aircraft varieties, which gives the airline increased flexibility. The investment only accounts for 4% of available seat miles (ASMs); however, passengers flying out of LaGuardia provide significant revenue for Delta in both international and short-haul flights. Lastly, the operational flexibility associated with owning a terminal will be a competitive advantage in the future.

The outlook from Delta's management is optimistic going forward. It was announced in an investor presentation that maintenance revenues are expected to double in 2024 from the 2019 revenue of $880 million, which is driven by new engine offerings.

Several factors for Delta Airlines provide a positive narrative to keep holding on to shares purchased during the IPO. As Delta retires the old MD-88s and MD-90s in 2020 and 2022, respectively, the company plans to become more efficient by expanding the fleet of efficient Airbus A220s and A321s, providing cost savings going forward. A forward dividend yield of 2.75% adds to the attractiveness of this airline in combination with strong fundamentals and high hopes for the future by management, making shares of Delta a buy headed into 2020.