Almost every investor has heard the adage "buy low, sell high." The Oracle of Omaha, Warren Buffett, famously said: "Be fearful when others are greedy and greedy when others are fearful." In other words, investors need to enter the market when it slumps and exit at its highs.

Contrarian investors follow a similar approach: They look at stocks that have lost considerable value, but have significant upside potential to generate wealth. Below are two such tech stocks that might be contrarian buys at their current prices.

BlackBerry stock is trading at a multiyear low

BlackBerry (NYSE:BB) exited the smartphone market in 2016. The company licensed its design and manufacturing to TCL, and pivoted to security software and services. 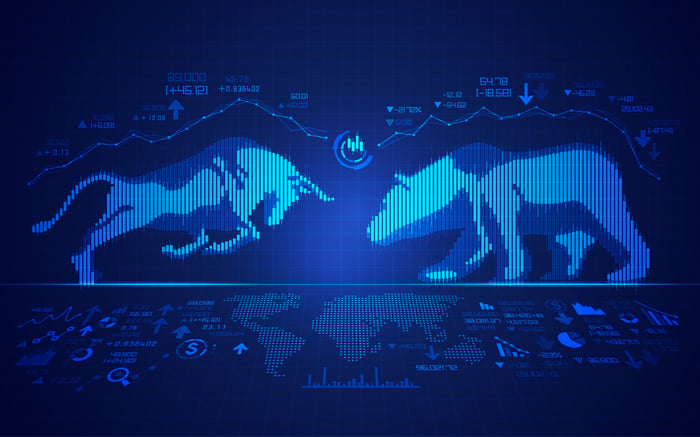 Recently, investors were unimpressed with BlackBerry's soft performance in the enterprise software and services (ESS) business. Total IoT sales were also down 2% in the fiscal third quarter. Though revenue rose 23% year over year, it was primarily driven by the acquisition of Cylance.

That being said, BlackBerry remains part of a high-growth industry with enough opportunities for sustainable growth over the long term. The company has estimated its total addressable market (TAM) at $22 billion across verticals.

In the crisis communication management business, BlackBerry has forecast the TAM at $3 billion. The TAM for unified endpoint management, embedded software and endpoint security has been forecast at $3.2 billion, $1.8 billion and $14 billion respectively by BlackBerry.

BlackBerry is optimistic about its mobile threat-detection solution, which is driven by AI (artificial intelligence). This has been integrated with its unified endpoint management console, and other applications.

The company's QNX platform continued to drive sales in the BTS (BlackBerry technology solutions) segment, and BlackBerry is pleased with the increase in QNX traction despite a slowdown in the global automobile industry.

The QNX business offers a range of secure software products. Though it's currently popular in the autonomous vehicle space, QNX is looking to increase penetration in other verticals such as medical devices, robotics, and industrial automation. Market research company Gartner expects 250 million connected vehicles will hit the roads by 2020.

BlackBerry acquired Cylance for $1.4 billion , and will now have the first cybersecurity product for the automotive market. In the fiscal third quarter, Cylance contributed $40 million to BlackBerry revenue, accounting for around 15% of sales.

With the addition of the Cylance AI security capabilities, we have the opportunity to provide a first cybersecurity platform for the auto market. JLR [Jaguar Land Rover] is the first to collaborate with us. We're working with others in the auto industry, and those interactions look promising.

BlackBerry continues to win contracts with government organizations around the world, due to its focus on security and related services; it has contracts with 16 of the G20 governments. These contracts should result in a steady stream of revenue over the next few years.

To keep investors interested, BlackBerry needs to stabilize revenue from the ESS segment and increase the customer base in Cylance and QNX verticals.

Etsy (NASDAQ:ETSY) is a marketplace for entrepreneurs to offer unique and creative handcrafted goods. The company is optimistic about long-term growth in this space and has valued the global addressable market at $250 billion. But what is likely to drive sales higher?

The company has been working on enhancing both buyer and seller experiences on its platform. In the third quarter, Etsy launched variation photos, which enable buyers to visualize color and design variations without the need for a separate listing. It also launched a tool making it easier for sellers to adopt this feature.

Etsy is also improving search capabilities on its platform. It has upgraded context-specific search-ranking algorithms from linear to nonlinear models. These changes have increased conversion rates, positively affecting sales figures.

We believe that as we continue to iterate on this new, even more sophisticated modeling approach, our algorithms will learn and deliver a more personalized shopping experience, showing results more specifically tailored to each individual buyer's tastes and preferences.

We've already seen a meaningful impact to conversion rates with our first launch of this new model, and think that's just the beginning. Similar to our prior CSR [context-specific ranking] work, we expect to apply these search-model improvements to other areas of the business, like promoted listings, in order to increase the relevance of ad results and drive more revenue.

The company is also enhancing features on the Etsy app, which has a loyal base of customers, to create a rewarding and engaging experience for repeat buyers. It has improved the buyer onboarding experience, as well as features of the home-screen feed, search dropdown menus, cart modifications, and recommendations.

Wall Street also forecasts EBITDA (earnings before interest, taxes, depreciation, and amortization) to rise from $140 million in 2018 to $301 million in 2021. These growth metrics make Etsy a strong buy, especially given the stock's 38% decline since March 2019.