In September 2017, I named Douglas Dynamics (NYSE:PLOW) as one of two top dividend stocks in industrial machinery. Since that time, its shares have soared 65% on a total-return basis, with most of the return (58%) generated in 2019.

Now, I wish I could say that I had anticipated this performance, but I didn't. Rather, I believed the manufacturer would provide solid dividend performance while slightly outpacing the broader market in terms of share price. But in the wake of its impressive appreciation over the last 12 months, now is an opportune time to consider whether Douglas Dynamics can continue to beat the market in 2020 -- or if it's due for a retracement.

According to CEO Bob McCormick, the company holds a dominant 50% to 60% share of the truck-mounted snow and ice control market. This business is quite profitable; in the third quarter, work truck attachments generated a healthy adjusted EBITDA margin of roughly 25%. That segment also contributed 52% of the company's $411.4 million in revenue through the first three quarters of 2019, and its profitability is a major driver of Douglas Dynamic's laudable year-to-date operating margin of 15%. 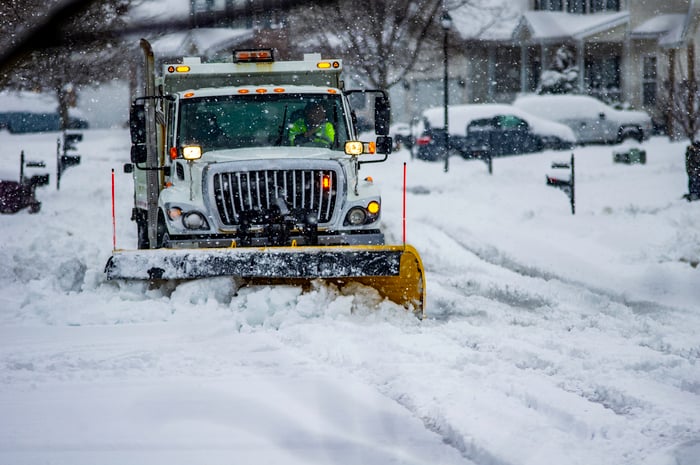 The manufacturer's second segment, work truck solutions, was formed via its acquisition of Dejana Truck & Utility Company in 2016. This revenue stream helps to insulate Douglas somewhat from the variability of weather patterns -- years with relatively light snowfall can lead to weaker sales in the attachments segment.

Since the Dejana acquisition, work truck solutions has achieved brisk top-line growth. In the first three quarters of 2019, its revenue has improved by 13.4% year-over-year, in comparison to an 8% expansion for the attachments business during the same period.

Conversely, work truck solutions has been a lower profitability unit, with an adjusted EBITDA margin of 9.7%. Both its revenue growth and profitability have been impeded somewhat in 2019 by delays in deliveries of truck engine chassis from original equipment manufacturers, though management recently noted that this trouble was abating as the year drew to a close.

Both of Douglas' segments have benefited from management's application of the Japanese business philosophy of kaizen (i.e. continuous improvement). The company's take on kaizen is couched in a productivity program it calls DDMS (Douglas Dynamics Management System), which serves as an overarching platform for enhancing manufacturing productivity and boosting profit margins. DDMS also underlays the reputation for high-quality products enjoyed by the company's major brands, and Douglas' reputation for fast-lead times in customized truck solutions -- all of which has helped both divisions improve sales in recent quarters.

The combination of a crisp top-line and DDMS-propelled margin growth manifested in this year's noteworthy financial results. In Q3, revenue rose by 14% year over year to a record $142 million, while net income jumped 25% to $12.4 million. These numbers, in the context of the company's dominance in work truck attachments, help clarify why Douglas's stock price delivered such dazzling gains in 2019.

Due to its stock appreciation this year, Douglas Dynamic's dividend yield has decreased from an enticing 3% to a still-attractive 2%. But its payout ratio stands at a very reasonable 48%. Management understands that investors prize dividend growth: The company has raised its dividend 11 times in the past nine years. Since I last wrote about Douglas Dynamics, it has boosted its quarterly payout by 14% to $0.273 per share.

Performance for the year ahead

So, where exactly will Douglas Dynamics' stock price head this year? That's hard to predict, as until the snow season ends in early March, the revenue it will earn from its truck attachments segment will be hard to guess. But given the company's recent growth rates and its efficiency in manufacturing, I believe it will exceed the performance of the Russell 2000 Index by at least three to five percentage points in 2020.

Further, while it may not trounce the market during the next 12 months, there's a reasonable probability that Douglas Dynamics will continue to outperform over the next several years, particularly rewarding those who choose to reinvest its rising dividend payouts.